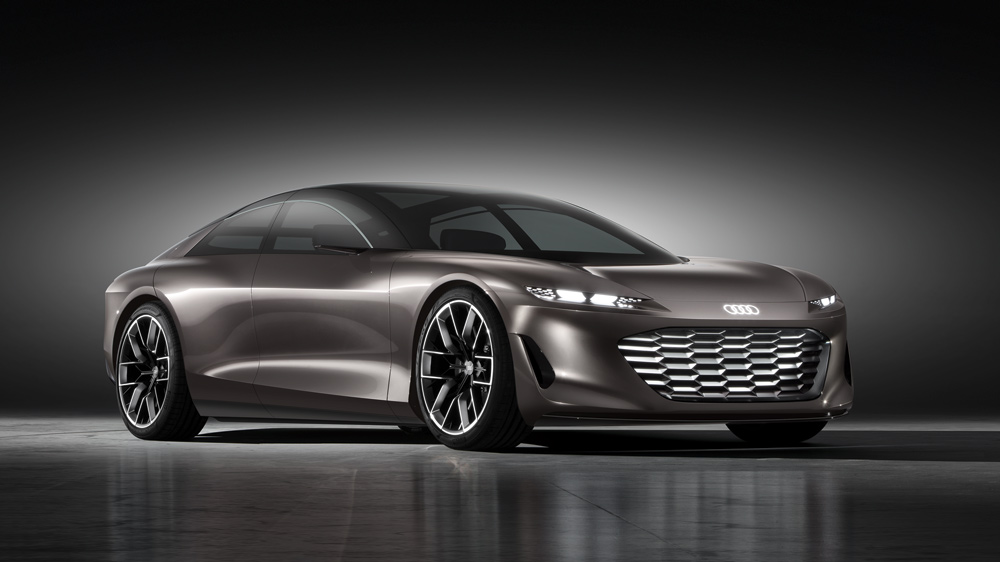 Audi has unveiled the second in a trio of concept cars that showcase the marque’s future design language and preview the shift to electrification. The Grandsphere, a muscular GT with slick coach doors and four seats, turns the paradigm of the luxury executive sedan on its head by putting the best seats in the front.

Designers were given the task to create a luxe cruiser modeled after the first-class cabins on long-haul international flights. But Audi interior designer Maksymilian Nawka and his team took the idea further. “We found these pictures from the cockpit with the pilots and the sunset, and we thought, ‘Isn’t this better than flying first class? Isn’t it better to fly the plane by yourself?’ So in this case, we combined the two worlds,” says Nawka.

In a departure from traditional design methods, the Grandsphere, recent Skysphere and next year’s Urbansphere concepts were designed from the inside out. In the case of the Grandsphere, Nawka notes that “the challenge was to create a lounge.” The minimalist, leather-free cabin is filled with sustainable wood—featured all around the inside of the car—and other trim made from wool and synthetic textiles. 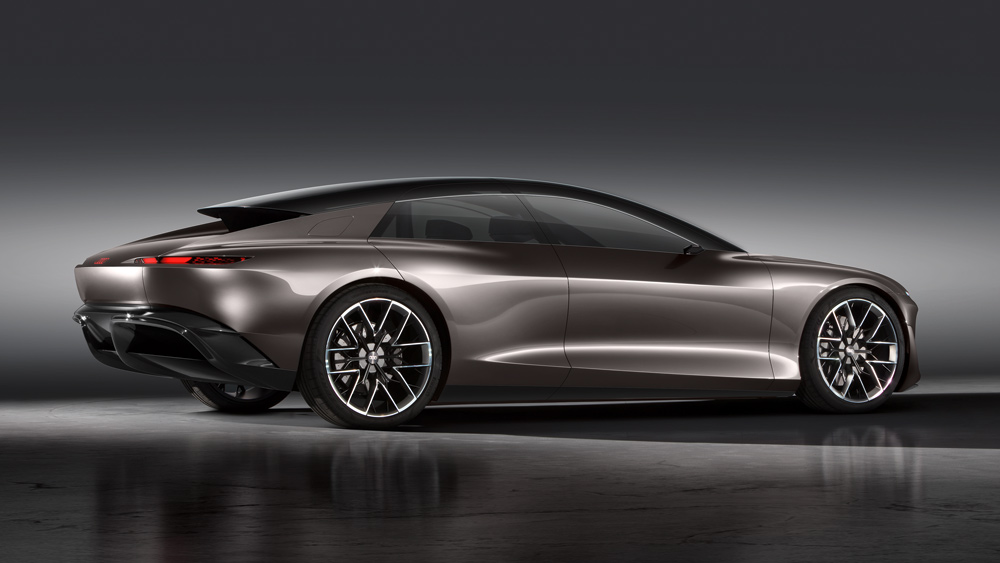 Thanks to the electric power-train configuration, which frees up space inside the cabin, sculpted front seats offer a substantial amount of legroom and can recline up to 60 degrees. In the back, a simple bench seat accommodates rear passengers. There’s also a panoramic glass roof that lets in plenty of light and expands the view. 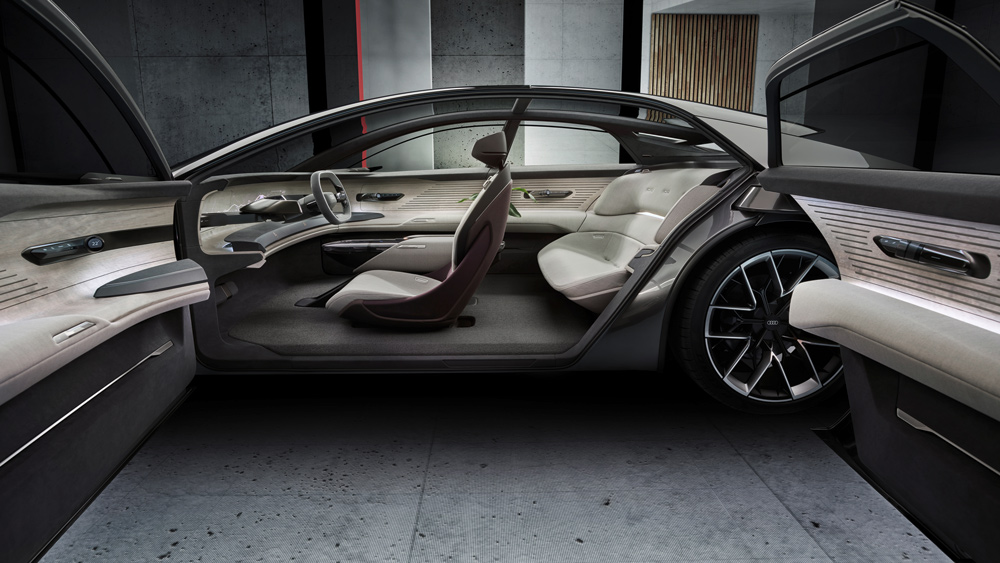 The minimalist, leather-free cabin is filled with sustainable wood and other trim made from wool and synthetic textiles.  Photo: Courtesy of Audi AG.

Although not as outlandish as the Skysphere concept on display to the public during Monterey Car Week, the Grandsphere has its own show-car-worthy novelties, such as a leafy plant between the front and back seats and a bar in the center console with an ice-cube box and water dispenser. As with the Skysphere, the Grandsphere was designed to be capable of level 4 autonomous driving and, as such, the steering wheel disappears into the dash when in self-driving mode. Screens are conspicuously missing in the cockpit and, instead, information and images are projected on the wood surface across the dash. According to Nawka, physical buttons in the car were inspired by high-end timepieces. In addition, certain vehicle functions can also be controlled via haptic touch or hand gestures. 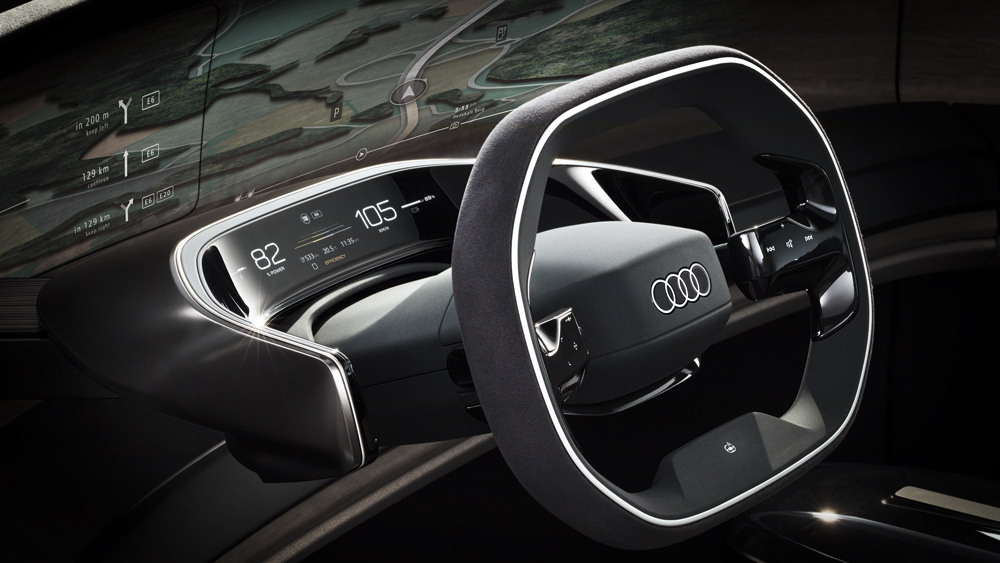 As the Grandsphere was designed for level 4 autonomous capability, the steering wheel disappears into the dash when in self-driving mode.  Photo: Courtesy of Audi AG.

Interior focus aside, it’s no doubt that the Grandsphere’s alluring outside will turn heads. Exterior designer Amar Vaya says he and his team created the car’s muscles based on the concept of Quattro, Audi’s all-wheel-drive system, which designers reference in the metal with muscular bulges, or “blisters,” above the rear fenders. Thin, sleek headlamps flank the four-ring logo above a new interpretation of the Audi singleframe front grille, which elegantly hides the cameras and sensors needed for an autonomous car. Moving the first-class experience to the front seats also enabled exterior designers to give the Grandsphere its fast GT silhouette, since rear headroom was no longer as much of a concern. 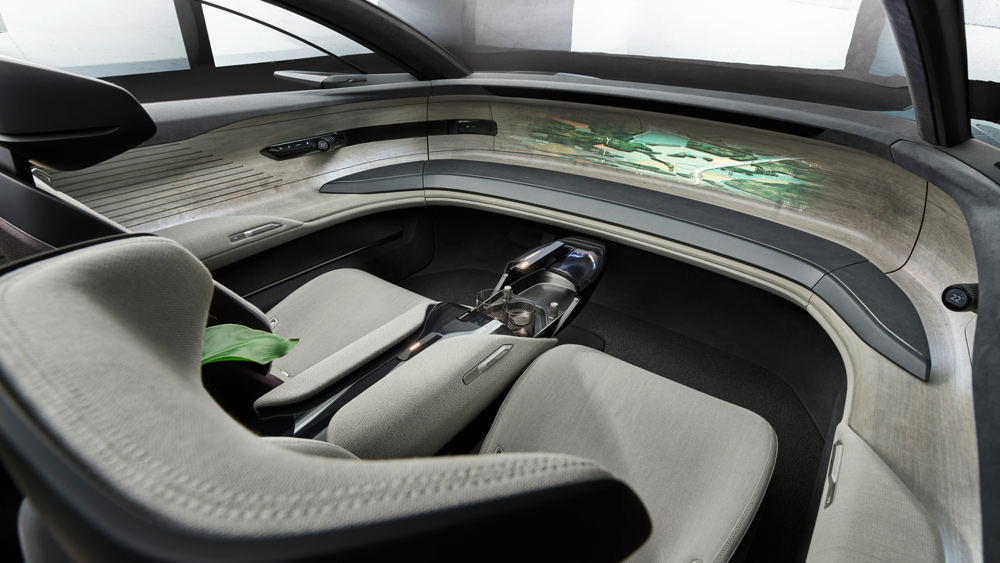 Information and images are projected on the wood surface across the dash, rather than on conventional screens.  Photo: Courtesy of Audi AG.

Powering the Grandsphere are two electric motors, one on each axle, that put out about 720 hp and 708 ft lbs of torque. An 800-volt charging system can replenish the car’s energy stores from five percent to 80 percent in 25 minutes, and Audi touts the Grandsphere’s range at about 466 miles, a distance covered smoothly as the active suspension system controls each wheel independently. 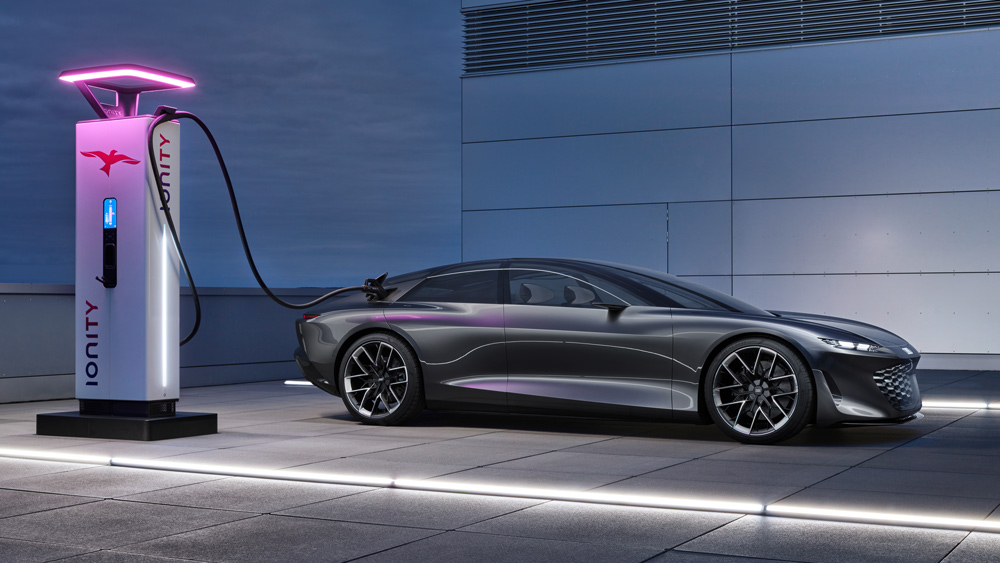 An 800-volt charging system is claimed to charge the car from five percent to 80 percent in 25 minutes.  Photo: Courtesy of Audi AG.

The Audi Grandsphere concept will be on display next week at the IAA motor show in Munich, which replaces the previously stalwart location in Frankfurt. And while we won’t see a production version of this car anytime soon, design cues from the Grandsphere will carry through on future production models. Audi design boss Marc Lichte tells us that the proportions, the Quattro bulges and the front face are all elements that define the brand and will carry on in the next generation of vehicles. And as we inch closer to true self-driving cars, it’s easy to imagine large flagships like the A8 evolving into rolling executive lounges where the front seats become the focus.