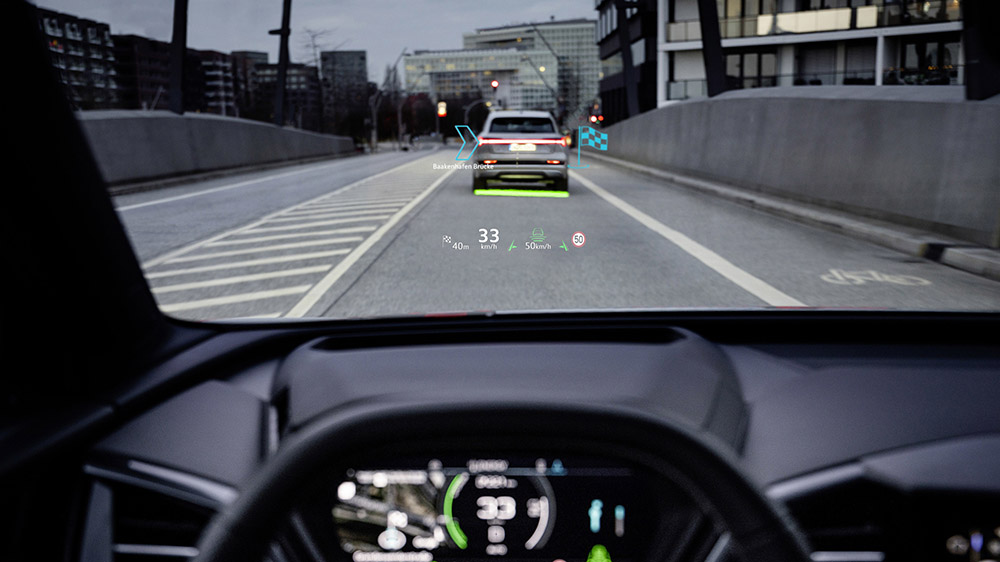 The all-electric powertrain on the upcoming 2022 Audi Q4 e-tron SUV won’t be its only cutting-edge component.

The German marque has just unveiled the futuristic interior for its fourth EV. Although the rest of the compact SUV won’t be unveiled until next month, a suite of cutting-edge features, including an augmented-reality (AR) head-up display, offers up a compelling peek of what’s to come.

That display is the highlight of the Q4 e-tron’s cabin. The system will project basic driving information, like speed and battery capacity, onto your windshield so that you can see the data without having to take your eyes off the road. That’s pretty standard for a HUD system, but where Audi’s new approach diverges from the competition is that it will also include detailed navigational information, according to a press release. Animated arrows will be projected onto your windshield telling you where and when to turn, something we can see being particularly useful at complex intersections or interchanges. The system will also display previews of what’s coming up, like traffic signs, and tell you how fast other vehicles are traveling, too, all of which will be projected at a silky smooth 60 frames per second.

There’s also a 10.3-inch instrument cluster that houses the vehicle’s fully digital virtual cockpit. Expect it to include all the information an instrument cluster normally does. To the right of the driver’s seat is the latest version of Audi’s MMI infotainment system. The system is topped by a 10.1-inch touchscreen display which can be upgraded to 11.6 inches if you’re a firm believer that bigger really is better. Unlike a lot of its peers, the Q4 e-tron’s center console will actually feature plenty of physical buttons that can be used to control everything from its climate control system to media options.

Outside its tech suite, the interior features an elegant design befitting a luxury automaker like Audi. On the upholstery front, the vehicle will come standard with a mixture of leather and faux leather elements and is available in four colors (black, steel gray, Santos brown, or pergament beige). Nappa leather is available as a premium add-on. There’s also an eco-friendly upholstery option that consists of faux leather and suede-like Dinamica microfiber, which is made from 45 percent recycled materials. Meanwhile, the SUV will have plenty of cargo space; 18.4 cubic feet when the rear seats are up, 52.6 cubic feet when they’re down.

We’ll have to wait until next month for a better idea of what to expect from the Q4 e-tron, including what it will look like (the SUV has only been teased in heavy camouflage so far). We do know that it will ride on Volkswagen Group’s MEB electric platform and have similar dimensions to the eagerly anticipated Volkswagen ID.4, though. Expect the company’s latest EV to arrive in dealerships early next year.