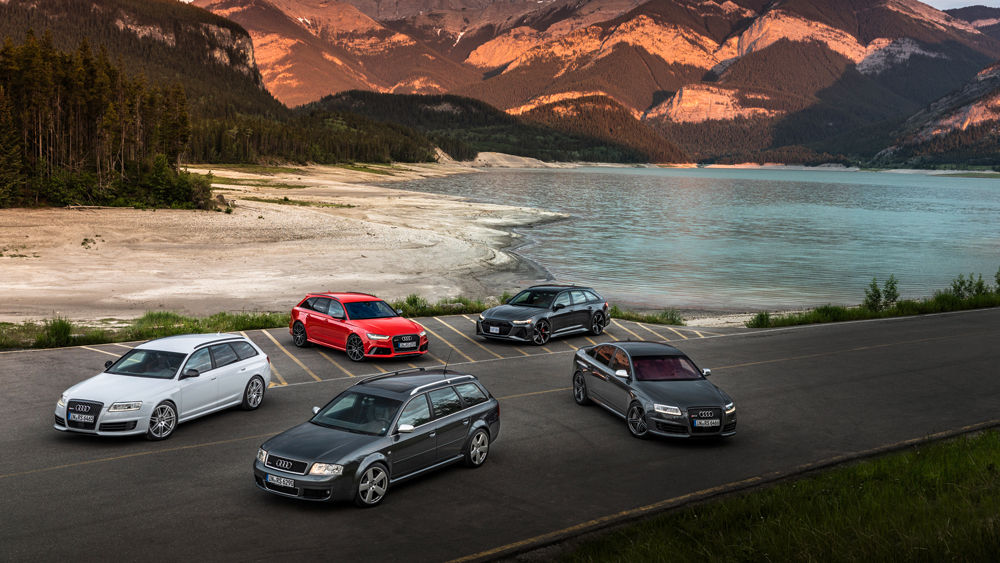 Hot-rodded sub-brands from the Big Four German luxury manufacturers—Audi RS, BMW M, Mercedes-AMG, and Porsche’s GT lineup—speak volumes to how carmakers express the idea of high-performance through individualized approaches. This month’s 20th anniversary of the Audi RS 6 sheds light on how the Ingolstadt brand expanded its repertoire of performance-focused spinoffs.

Audi’s sporting intentions became realized in 1983, when Quattro and Sport Quattro versions punched up the athleticism of otherwise workaday models. Founding Quattro GmbH in Neckarsulm, near company HQs, made the effort official. However, it would take years for the brand’s road-going efforts to become as charismatic as we know them to be today. Here’s how the last two decades of RS 6s helped it get there.

By the time Audi scored a podium finish at the grueling 24 Hours of Le Mans at the brand’s debut in 1999, the carmaker was primed to up the game of their RS-branded road cars. As such, the first-generation (C5) RS 6’s powerplant was outsourced to British engine builder Cosworth, which was an Audi subsidiary until 2004. Because the massive 4.2-liter V-8 would not fit in the first RS 6’s engine bay, the space was expanded some 1.6 inches. The powerplant was bold, producing 450 metric hp—the same as the power produced by the brand’s race car that won the 2002 title, making it the most powerful road-going engine Audi built. However, the RS 6 also aimed for everyday drivability by ditching its manual transmission, opting instead for a smooth-shifting automatic. A newly developed Dynamic Ride Control system allowed adaptive damping to smooth out the ride when necessary, adding further breadth to its capabilities.

A quantum leap came with the second-gen C6 model in 2008, which leveraged Lamborghini’s V-10 powerplant, sacrificing purist-appeasing lightweight construction for the sake of cylinder count bragging rights. Though the hulking twin-turbo, 613-pound engine displaced considerably more volume than the V-8, this RS was only widened by 1.38 inches, making it a relatively subdued visual upgrade. A substantially reinforced six-speed laid power down to all four wheels in the great Audi tradition, and the RS 6 plus model became the fastest four-ring car yet with a claimed top speed of 188 mph. For the first time, Dynamic Ride Control suspension could be equipped with an additional three-stage setting on the shock absorbers, adding more adjustability to the setup. Carbon ceramic brakes also became available for the first time.

The 2013 C7 RS 6 roiled purists everywhere by swapping the supercar-derived V-10 for twin-turbo, 4.0-liter V-8. A significant 30 percent improvement in fuel economy came from the smaller engine, aided by 265 pounds in weight savings thanks to increased use of aluminum. Reconfigured packaging improved the car’s balance and handling, and standard air suspension was incorporated for the first time in an RS model. Coupled with an eight-speed Tiptronic gearbox, the C7 was also able to scoot to 62 mph in only 3.9 seconds. While some V-8 haters missed the old V-10, they were likely subdued by the fact that the smaller engine actually produced more power (597 hp).

The present day brings us to the fourth-generation RS 6. Introduced in 2019, the C8 starts with Audi’s familiar twin-turbo 4.0-liter V-8 format, but adds a 48-volt mild hybrid system for improved efficiency. The added hardware produces inevitable weight gain, which invariably irks the O.G. performance fans who prefer simpler setups and more feathery construction. However, the latest RS 6 also uses electronic wizardry to mask its mass, incorporating four-wheel steering to aid agility at low speeds and stability at higher speeds. The C8 swells 3.15 inches sideways, lending it a more distinctly aggressive look than its predecessors. Optional 22-inch wheels fill the wells with satisfying heft. Compellingly, the latest model is also a bit of a straight-line rocket ship, capable of achieving 62 mph in only 3.6 seconds. In spite of the heightened performance, this latest RS 6 is the first to be built on Audi’s main production line in Neckarsulm, rather than on a separate line.

While the future of Audi’s venerable RS 6 remains to be written, the flagship model continues to represent the upper edges of what the brand can achieve when it comes to sophisticated performance. Lower-end models will continue to explore new technologies packaged into fewer cylinders and smaller footprints, but the RS 6 stands apart as a leader in Audi’s charge for high-performance luxury.