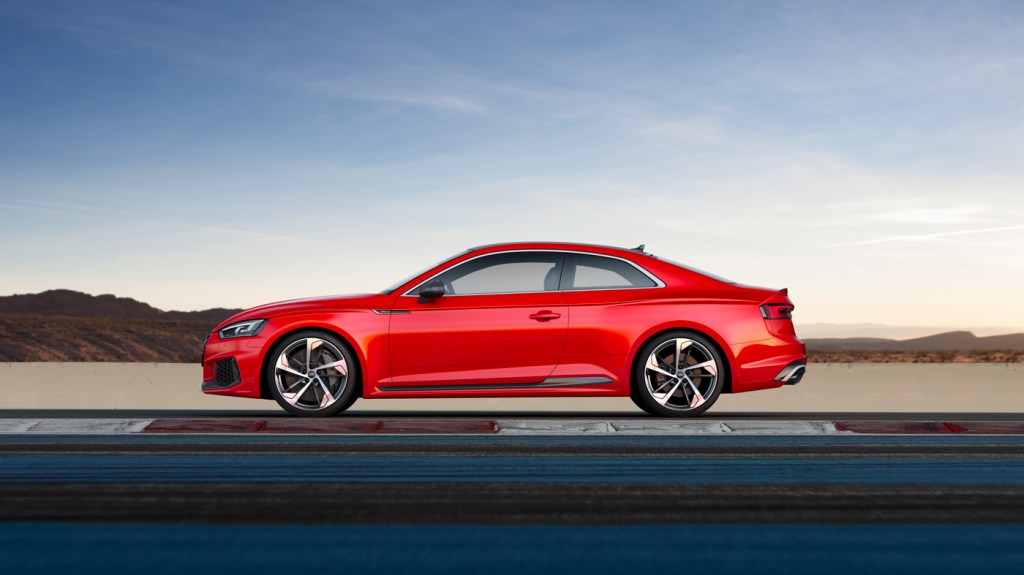 Want to know what car I’m really looking forward to next year? Audi’s rear-wheel-drive version of the R8 supercar. Audi says the limited-edition model will ditch some of the luxuries of the AWD R8 in return for less weight, promising an even more focused driving experience. Read: We’re actually going to get an Audi that likes to wag its tail.

Take the R8 RWS as a sign that the buttoned-down marque is paying special attention to the purists. Audi is finally getting serious about competing with BMW’s M and Mercedes’ AMG high-performance brands. As such, a number of high-performance variants long available in Europe, are now finding their way stateside. Today, you can walk into a dealership and have your pick of the RS3, TT RS, RS 7, R8, and R8 Spyder. And the long-awaited RS 5 coupe will arrive in spring of next year.

All of the aforementioned models fall into the “Audi Sport” line. Formerly, Audi’s in-house performance division was known as Quattro GmbH before it was rebranded last year. Engineered in the small city of Neckarsulm, in southwest Germany, the models themselves are highly differentiated. When a brand new model is being planned, the engineers and designers at Audi Sport work in parallel with their Audi colleagues in Ingolstadt. The concept is to wring as much performance as possible to the variants by integrating engine upgrades or replacements, and revisions to the suspension, cooling, and braking systems.

Not surprisingly, Audi Sport models share DNA with Audi’s racecars, so the line also encompasses customer-focused racers like the RS 3 LMS and R8 LMS. “Audi Sport has always been about testing on the track what we deliver to our customers on the road,” says Scott Keogh, Audi of America president. “That level of engineering and authenticity is what will continue to allow us to compete and, in many cases, outperform our M and AMG rivals.”

The Audi RS 3 LMS, a competition car for the consumer.  Photo: Courtesy Audi.

In the United States, the RS cars have never had the visibility of M or AMG. The first-ever RS, the 375 hp RS4 Avant wagon, was a Europe-only car released in 2000. The North American market had to wait until 2002 for the first RS, the RS6. An RS version of the A4 sedan arrived in 2007.

The RS4 was incredible. I’ll never forget a week I spent with it, driving the byroads around Vermont. At the time, Audi’s designs were modest and featured small grilles and humble exteriors. But a 420 hp nuclear reactor sat inside the front of the A4-based sedan, a V-8 that loved to be revved to 8,000 rpm. The delirious powerplant was married to a 6-speed manual transmission. Like the RS6, it was a sleeper—right until the sound of the engine ripped you out of your slumber.

As of now, there are no plans for a new RS4. But if you’re wondering how Audi differentiates the RS models from its competitors, it’s worth taking a drive in the TT RS or RS 3. These are relatively small cars, so you’d expect 4-cylinder engines with big honking turbochargers. Audi Sport engineers, however, decided that a 4-cylinder engine had neither sufficient personality nor a raucous enough sound. (We agree.) So instead of basing the TT RS off the regular TT’s 2-liter, they created an aluminum-block, turbocharged 5-cylinder, good for 400 hp and 354 ft lbs of torque.

Five-cylinders have a long history at Audi, especially in its rally cars. What is most noticeable in the TT RS is the fabulous noise. The natural imbalance between the cylinders creates a special timbre, an engine note that sounds alive and organic. It gets even better as you rev it toward 7,000 rpm.

The car is incredibly fast off the line, rips around curves and, in general, delivers all of the performance and thrills you could ask for. It has personality in spades. Which bodes well for the upcoming RS 5—which will likely get a high-power V-6—and an all-new RS 7 down the line.

For those of us who love a German car with a little extra zing, we’re more spoiled for choice than ever.