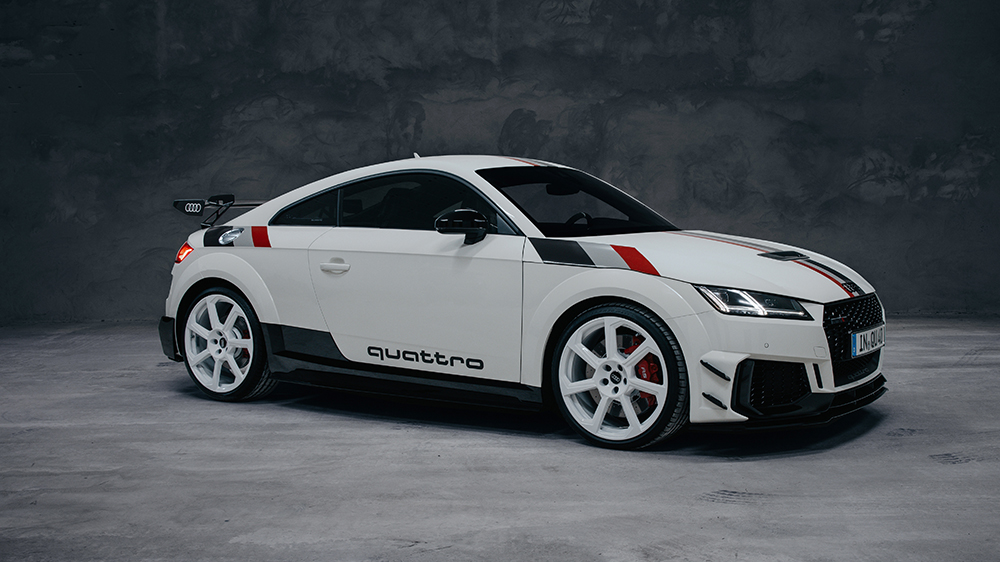 One of Audi’s finest achievements, the Quattro rally car, turns 40 years old this year. And to mark the occasion, the automaker is celebrating the best way it knows how, by releasing a limited-edition tribute to the historic all-wheel-drive vehicle.

The German marque has just announced the TT RS 40 Years of Quattro, an ultra-exclusive homage to the racer. Featuring a sporty livery, the one-of-40 super coupé also features a brand-new aero kit and special wheels that ensure it lives up to the high standards set by its namesake.

The TT RS 40 Years of Quattro’s livery is specifically inspired by the Walter Röhrl-drive S1 Quattro that claimed victory at Pikes Peak back in 1987, according to a press release. In features an Alpine white base, gloss black accents and red, grey and blue racing stripes down the middle. Completing the sharp livery are special Quattro decals on the hood, shoulders, roof and rear.

While a retro-inspired livery would be enough for some, Audi didn’t stop there. The exclusive TT RS features a special aero kit, which includes a new front splitter, side flics on the front apron, a fixed rear wing and diffuser. Not only does the kit lend the coupé a sportier appearance, it will also help shave a few seconds off your lap time. The car also rides on new 20-inch, white alloy wheels, which better highlight the red brake calipers just behind them. Inside the car, you’ll find several livery-inspired accents and black Nappa leather RS sport seats with an Alcantara center section, while the rear bench seats can be replaced with an optional carbon strut cross brace that reduces the vehicle’s weight by 35 pounds and improves its torsional rigidity.

Things have been left untouched underneath the hood, which means the car is still powered by a turbocharged inline-five that can output 394 horses and 354 lb-ft of twist. Mated to a seven-speed S tronic dual-clutch transmission, it can rocket the car from zero to 62 mph in just 3.7 seconds and push it to a top speed of 174 mph. And, like every Quattro over the last 40 years, the car features an all-wheel-drive system.

Inside the Audi TT RS 40 Years of Quattro  Audi

The TT RS 40 Years of Quattro will cost $133,600, which is $60,000 more than the coupe’s usual starting price. But cost isn’t the only impediment to getting your hands on the sporty variant. The automaker has only announced plans to sell the car in Germany so far—so buying one of the 40 examples might require a vacation in Berlin.