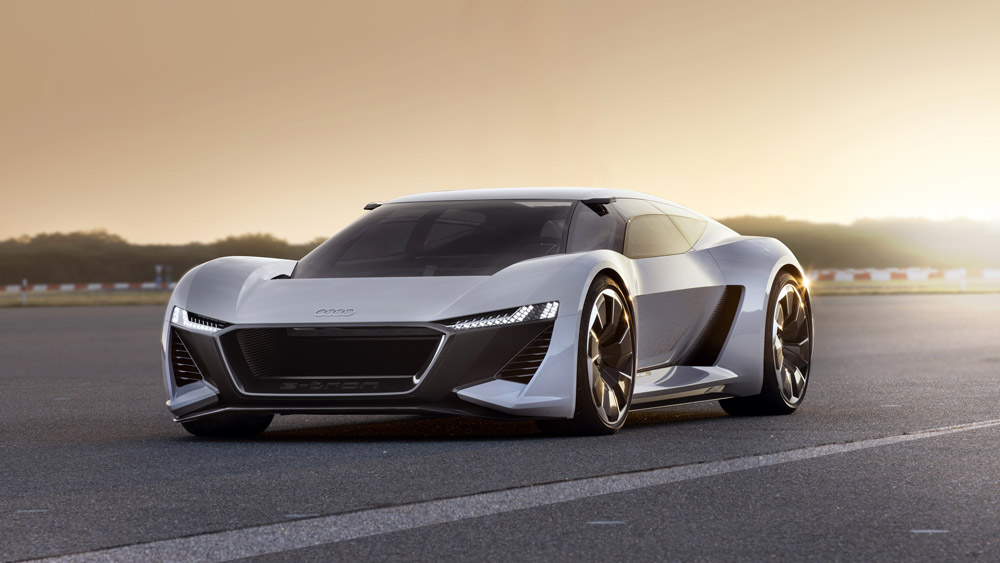 Near the end of last month, at the famed WeatherTech Raceway Laguna Seca in Monterey, Calif., Audi unveiled the PB18 E-Tron, a new, all-electric sports car that promises to break barriers in the realms of both design and technology. Described by Audi executives as “a cross between a supercar like an R8 and a sportback,” the track-worthy racer looks like something out of the future with its shooting-brake-style silhouette, voluptuous lines, and blistering performance.

Inspiration for the PB18 (named for “Pebble Beach” and “2018”) comes from two seemingly disparate sources. The mid-engine, cab-forward proportions, lightweight construction, push-rod front suspension, and pull-rod rear suspension are borrowed from the championship-winning R18 LMP1 Le Mans prototype racecars Audi campaigned from 2011 to 2016. The other comes from the Aicon concept, a fully electric, long-distance luxury car Audi billed as a “business jet for the road,” which shares the PB18’s electric drive system and solid-state battery for energy storage.

Gael Buzyn, head of Audi’s not-yet-finished Malibu design studio, gave us an exclusive walkaround of the car after the wraps came off. “The driver can use this car for more than a day at the racetrack,” he told us. “You can also put your golf bag in the back and go for a weekend in the wine country.” Buzyn pointed out some of his favorite design elements: the wide, horizontally cut interpretation of Audi’s signature singleframe grille; the extraordinarily low windshield, which stretches down practically to the nose of the car, allowing the driver to see all of the road in front (further aided by a transparent instrument display which shows only digitally projected information); and the low roofline and high rear fenders. “There’s barely any height difference between the roof and the fender,” he says, running his hand along the car’s contours. Inside the simple cabin, the single seat and connected instrument panel can move to the center, racecar-style, while bespoke luggage nestles perfectly into the rear hatch.

Three electric motors—one in front and two in the rear—combine for roughly 670 hp and 612 ft lbs of torque.  Photo: Courtesy Audi AG.

Three electric motors—one in front and two in the rear—enable the PB18 E-Tron to crank out a combined 500 kw (or about 670 hp) and 612 ft lbs of torque. Even with its solid-state battery, a carbon fiber, aluminum, and composite construction helps the car to achieve a relatively light curb weight of 3,417 pounds. Combined with all-wheel drive and an electronic torque control management system, Audi executives say the PB18 will shoot from zero to 60 mph in about two seconds, ranking it among one of the world’s fastest sports cars—getting to speed in half the time of the Jaguar I-Pace, for example, and even faster than the 1,000 hp Lucid Air.

Although specific plans for a production car haven’t been announced, Buzyn acknowledges that it’s not out of the question. “The business is going through a revolution with electrification and automation and digitization. That brings new business cases, new types of ownership, and it also brings new product. But the brand needed to do a manifesto about what we’re about, and that is passion for the automobile. This is what we do.”