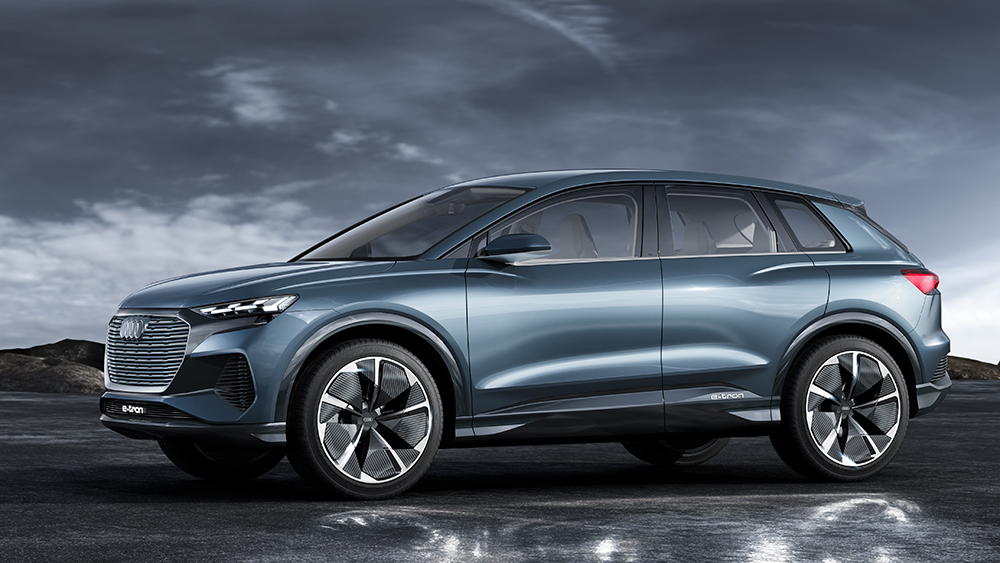 Audi debuted its fourth electric vehicle at the Geneva Motor Show this week, the Q4 E-Tron concept. Don’t let that name fool you; the car you see here is 99 percent production ready and the Germans have committed to manufacturing it.

Under the floor, there’s an 82 kWh battery pack that powers twin motors—one per axle—that have a combined output of 225 kW. That’ll get the Q4 from zero to 60 in about 6.3 seconds, and it’ll have a top speed of 111 miles an hour. But the interesting integer is the range: 280 miles off a single charge. Granted that number is going off the Europe’s WLTP rating, and the EPA typically shaves a few miles off that when giving BEVs range ratings for the U.S., but it should still be an impressive amount of miles.

“It’s an important entry into the smaller electric SUV market,” says Filip Brabec, vice president of product management for Audi of America. “We’ve done the larger E-Tron, we’ve got the E-Tron GT coming, and now we’ve got the Q4. It’s compact, but it’s got an A6-like interior. That’s something the BEV architecture allows us to do; give a spacious and roomy cabin.”

While the interior is still a concept, you can be sure the finished variant will have plenty of screens, nice tech touches, and quality materials. The lack of a traditional drivetrain means more space between the seats for cargo and personal items, too.

If you’re thinking the SUV has a bit of a crossover feel—hey there, high beltline—you’re not wrong, but remember that Audi design specifies that any vehicle consist of two-thirds body and one-third window. Those proportions help give the vehicles a sportier feel. “We also have these strong pronounced lines on the front and rear fender, with a cut line that has a negative surface, which give each wheel a proper haunch,” Brabec says. “These are purposeful to communicate that the vehicle is all-wheel drive.”

Ask Brabec about the slew of electric vehicles to his stand’s right and left at the Motor Show, and whether those offerings influence Audi’s future product road map and he’s confident about the brand’s heading. “We naturally look at the competition, but we’re trying to look at mainstream segments and live there as much as possible. In today’s U.S. marketplace, the premium segments are ready to go electric; there are less objections from those consumers. What we want is to make the switch to electric as effortless as possible for the masses.” The Q4 E-Tron will likely provide a flawless transition to those ready to make the leap.