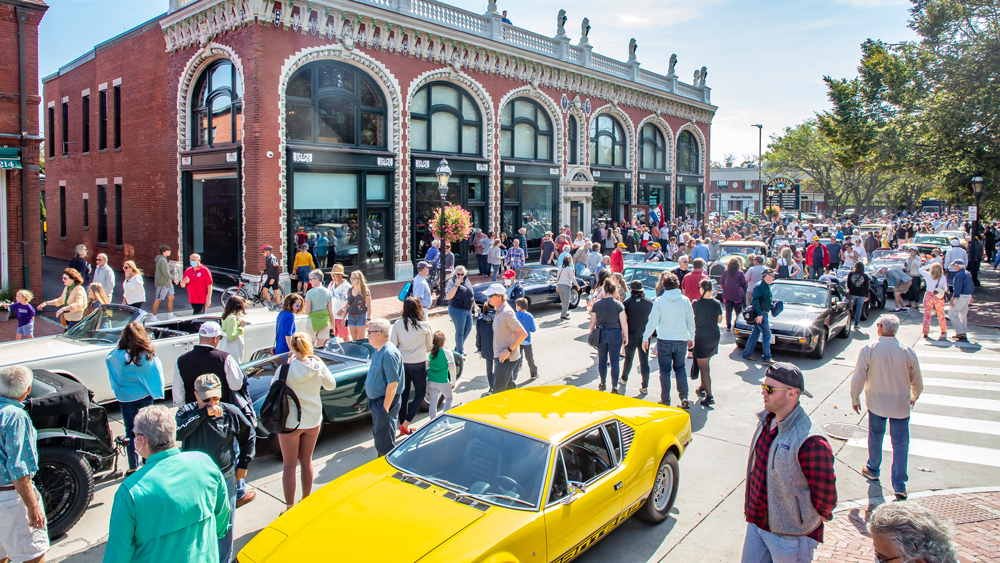 Among the world’s leading automotive concours, those of Pebble Beach and Villa d’Este have built their renown on legacies dating back to the middle of last century and earlier. So, for a newcomer like the Audrain Newport Concours & Motor Week, first held in 2019, to have such a meteoric rise in prominence could mistakenly be viewed as just a flash in the pan—until you consider the man steering its course.

Donald Osborne, frequent guest on the show Jay Leno’s Garage, is not only an esteemed automobile historian, appraiser and consultant, but is the CEO of both the Audrain Auto Museum and its associated concours in Newport, R.I. The third running of the four-day festival (the pandemic shut down 2020’s edition), takes place September 29 through October 2 and will feature seminars, various automobile gatherings, a Tour d’Elegance and the concours itself on Sunday. Osborne shares why he signed on, what makes the Audrain event so popular and why he thinks the future of collector cars could be even brighter with the next generation of enthusiasts behind the wheel.

What inspired your interest in the collector-car world?

It’s funny, the cars in which I had an interest, became collector cars. The cars I was first interested in were basically just used, but were interesting used cars. I think that’s something which goes across all collecting strata; those objects that have the attributes of value, that have always stood the test of time, whether it’s in art, architecture, furniture or whatever it might be. And those attributes can be recognized now in cars that we didn’t see in that way before. I’m talking about the fact that, in 1984, a 1964 Porsche 356C was a 20-year-old used car. Yes, there were people who enjoyed them very much, but nobody said, “I’m going to go out and take a loan and finance this old Porsche because it’s going to be worth a lot of money someday.” Nobody thought that.

How did the Audrain Newport Concours d’Elegance come about, and how did you get involved?

That is a story I love telling because I did not come up with the idea to have the Audrain Newport Concours d’Elegance. In fact, back in 2018, when I was asked to be a consultant for the initial 2019 event, my first reaction was that the world does not need another concours, God save us from it. I’ve been involved in enough events around the country and around the world, and I thought, “nobody needs this.” But then I began to spend more time in Newport, and chatted with the folks here at the Audrain. It was Newport that really convinced me that this is a project I wanted to be involved in, and the Audrain an organization I wanted to be involved with to do this. And it’s because Newport itself is such an amazing place.

Has there been a change recently in the concours model and, if so, how did you address it?

I think that the rise of “cars and coffee” has changed the paradigm for how people engage with cars. They are low-impact events where you run what you brung. You drive your car to a place not terribly far away, park it for a couple of hours, chat with your friends, go for a drive in the afternoon, go home and you’re done. The “cars and coffee” effect has really done in the one-day concours on a golf course. But then you have events that are destinations, like Monterey and Villa d’Este, where you plan a trip for up to a week and do many different things that touch on the car hobby. That’s what the Audrain Concours and Motor Week was envisioned to do and, indeed, has quite successfully executed.

We have events for the diehard car enthusiast, for the more casual enthusiast and for their family members who tolerate their passion or interest. Newport is an extraordinary place and there is so much going on here. Our events take place in so many parts of the city as well—the Newport Art Museum, the International Tennis Hall of Fame, Rough Point, Fort Adams, the Redwood Library. So there are places all over town that really express what Newport is about and also involve the cars, and that makes a difference.

Was it planned to be a such a comprehensive, multiday program from the beginning?

It started as the Motor Week. I have never been involved in something that launched at the level this one did; it was quite daunting. For a lot of people involved in that inaugural event, they had no idea what they were creating, so it didn’t faze them. What’s also extraordinary is that, unlike other cities or locations that basically say, “Oh God, here come the car people, lock up the cows and hide the liquor,” the reaction from this city, region and state is terrific—people welcome this. The traditional Newport summer season has long been over by the time we do our concours, so we have actually extended the Newport season to the beginning of October. We close down the main street, Bellevue Avenue, for the end of our Tour d’Elegance on Saturday, and no one honks a horn but, instead, people stop in their cars and take pictures. It’s very emblematic of what the spirit of this place is and what it’s like.

In your opinion, why has the Audrain Concours & Motor Week gained such rapid success and prominence in such a short time?

We have a terrific team and we are connected in the automotive world. Of course, Jay [Leno] being a great friend of ours certainly did not hurt. People thought, “Well, if Jay is going to devote some time to this, then it’s something that we should pay attention to.” And then we executed at a very high level in 2019, and were therefore able to get a level of attention that a lot of first time exhibitions fail to get. It was quite heartening to see us considered a world-class concours in our first year.

How is the Audrain Newport Concours structured?

The concours itself will have 180 vehicles; that’s cars plus, for the first time, motorcycles as well. We have special classes for Cadillac, Ferrari and the Rolls-Royce Silver Ghost, then chronological classes for sports and luxury cars going from the Brass Era to 1975. We also have three classes of “30 Under 30,” which was an idea introduced by Jay in 2019. We invite owners who are 30 years old or younger, with $30,000 or less invested in their vehicles, to show on the main concours field. Those Best in Class winners are also considered in the Best of Show category. Then there’s a very special display class that tells the story of ATS, or Automobili Turismo e Sport, which includes two very rare ATS GTs.

Explain a bit about the judging criteria.

It’s generally referred to as French Judging, that is to say it’s not a points-based system like that of the CCCA [Classic Car Club of America]. It’s about the car, but we also put a special emphasis on the story of the car—who built the car, who owned the car, why they owned the car—so the judges are charged with understanding and getting into that aspect when they speak to the entrants.

Which category are you most drawn to, and why?

The ATS is one that really has my passion, my heart. Also, the Brass Era cars are a great source of fascination for me. And then I have this absolute love for Italian coachbuilt cars.

A 1953 Abarth was named Best of Show at the 2021 Audrain competition. Do you think this portends a trend of postwar cars finally prevailing at concours in general?

I love prewar cars and we have some spectacular examples coming, many of which will absolutely be contenders for Best of Show. However, collecting moves forward and we have to move forward to look at specific attributes of specific cars. That particular Abarth is one of my favorite cars on the planet, and when deliberations were going on, we came to the consensus that the overarching theme of this event is to celebrate, in automobiles, what Newport itself stands for—history, luxury and sport. That car is the best combination of those three elements that could ever be imagined.

Can you give a teaser about the topics you will be speaking on during the panel discussions?

The Forensics in Motion discussion is based on the fact that everyone is very interested in originality, preservation and authenticity. But we have been collecting cars long enough that there are actually old restorations that, to the untrained eye, can appear to be original. And when people in the marketplace are paying a premium for originality, then we have to really pay attention to the techniques that we use in terms of evaluating that. What are the questions people need to ask and what should they not take for granted?There are some fascinating stories.

Another seminar is “Can We Predict the Future of the Car,” which is something very much at the heart of discussions I am in constantly, obviously, with the looming electrification of the global car fleet. A weatherman can make a 50/50 forecast in four days, so how can we actually predict what’s going to happen in 10 years? I think it’s going to be quite a lively discussion.

Are you optimistic that subsequent generations will keep the collector-car world populated?

Yes, 1,000 percent. The traditional collector-car bell curve is that we lust after a car at age 14, we can finally afford it at 40, and by the time we are 70, we are not involved in it and sell the car for a loss because nobody’s interested in those cars anymore; they weren’t teenagers when those cars were new. Well, the folks who were teenagers when veteran cars [ones built before 1919] were new have long been gone. And yet, there are 20-year-olds who are fascinated by veteran cars. Why? It’s because of what they offer. They’re purely mechanical; they’re blacksmith objects in a completely digital world. Young people have lived in an era where nothing that they touch can be taken apart and repaired.

One of the panels I’m hosting is on young talent and will include Evan Clary, a McPherson graduate currently working at Paul Russell and Company, whose [automotive] interests are so wide-ranging and varied. That’s something I really want the audience to understand; the fact that there are lots of young people who want to keep the collector-car world alive, and have the interest and energy to take it places we’ve never imagined.