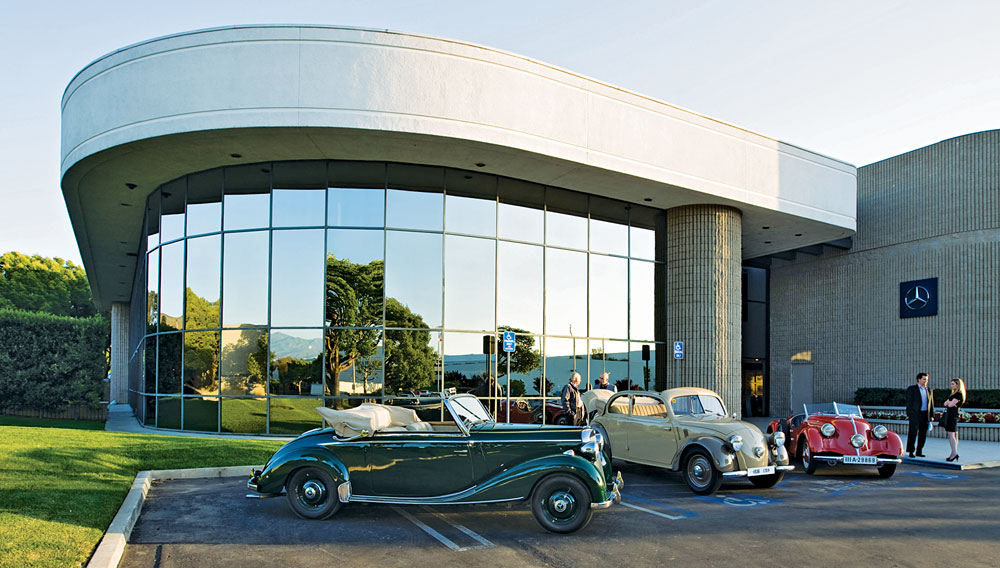 The Mercedes-Benz Classic Center does more than just restore classic cars. It also reveals their stories.

It would not be uncommon for a visitor to the Mercedes-Benz Classic Center (www.mercedes-benz-classic.com) in Irvine, Calif.—while perusing the 40 historic cars on display—to grow particularly fond of a fully restored 1935 150 Sports Roadster, one of only six that the brand ever built and the only one that still exists. Today, the mid-engine sports car, which was the first production car to bear that distinction, exemplifies the innovative approaches that the German automaker was introducing to the industry at that time. But the roadster also exemplifies the type of restoration work that the center can produce today. “You have to have a very careful hand because you don’t want to alter the historical provenance of the car,” says Mike Kunz, the center’s manager, who also oversaw the car’s restoration. “You have to be sensitive to that. You have to be aware of what was original with the car and what someone might have added in the 1940s to keep it running.”

Almost as impressive at the brand’s innovations during the 1930s is the fact that the Mercedes-Benz Classic Center could restore a car that offered so little in the way of documentation. It’s no small task to restore a car when no other example of it exists, but with the help of archival photos from the ’30s and an unsurpassed knowledge of the brand’s production methods and existing technology at that time, the center’s team of eight restoration specialists succeeded in preserving a piece of automotive history.

Of course, the center’s archival database is not limited to photographs. Those who already own a classic Mercedes can find detailed histories of their vehicles by using records that are held both domestically and in the Daimler Archives in Stuttgart, Germany—one of the largest historical industrial archives in Europe. “For me, the interesting part is certainly the car, but the more interesting part is the car’s history and how it relates to the individuals,” Kunz says. “That’s what’s driving our business. It’s the history of the car and the story behind the car that drives people to have them restored. Building that connection is the strongest motivating factor to have a car restored.” The center’s database can also help customers find a variety of literature on a particular model, including out-of-print owner’s manuals, service manuals, and technical data books.

The center does offer a retail department, where a handful of contemporary classic and vintage Mercedes models are available, ranging in price from a modest $25,000 to seven figures. But Kunz says that the majority of the center’s work involves the restoration of a customer’s current car. In those instances, a full restoration can take two to three years and, depending on the car and its existing condition, can cost between $250,000 and $500,000. With such a restoration project, Kunz and his team guarantee a finished product that is historically accurate—something that he acknowledges is sometimes compromised by other restorers. “We’ve often seen restorations where the car is over-restored with engine compartments that have far too much bling to them,” he says. “The factory never built it that way and in our view, we want to put it back exactly as it was when it left the factory. We don’t believe in modifications.”

The center will make small concessions, such as installing stronger headlamp bulbs, though Kunz stresses that such concessions are made only for safety purposes and are always easily reversible. No other concessions are made. “You wouldn’t repaint a painting by an old master because you have better acrylic paints now,” he says. “You just wouldn’t do that. It’s about the reputation of the brand and keeping things as they were, as much as it is about the reputation of the center.”