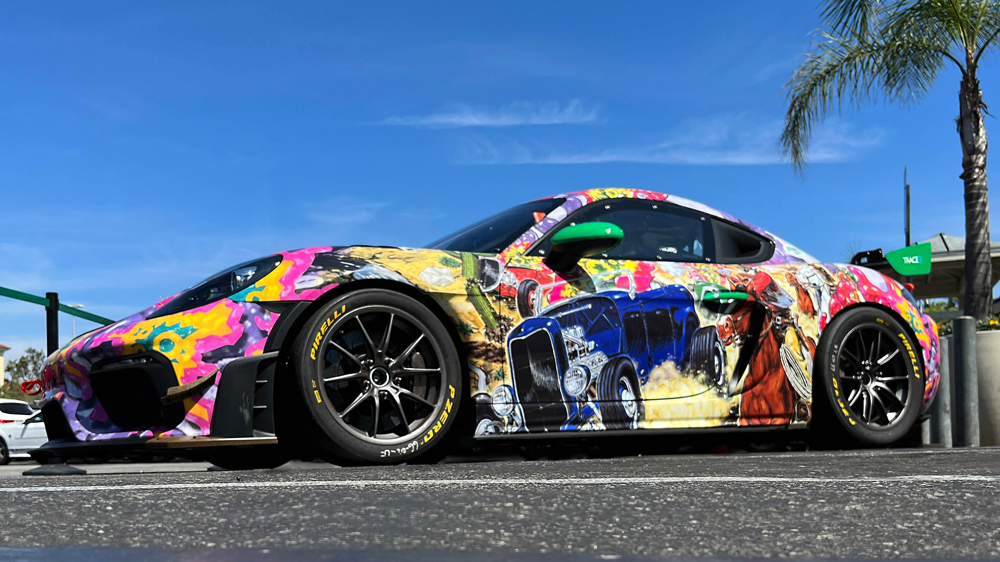 AutoMoto’s online and live event presence connects car and motorcycle enthusiasts with other forms of motoring expression found in film, art and pop culture. Now, in collaboration with artist Robt. Williams, AutoMoto has turned a Porsche race car and limited-edition luxury timepiece into canvases for the acclaimed painter’s surrealistic motor-themed visions. And it has done so with the help of the Racer’s Group (TRG) motorsport team.

TRG team drivers Derek DeBoer and Jason Alexandridis are no strangers to the SRO GT4 America Championship. They last raced together for TRG in 2016, winning the overall Sprint X Team Championship. This year will be DeBoer’s 10th season driving for the team, with 34 podium finishes and several overall wins to his credit. And if the lively livery of his Porsche 718 from last year left an impression, then the latest entry—the all-new-for-2022 GT4 RS Clubsport—will be blowing minds at every turn.

The new Porsche 718 Cayman GT4 RS Clubsport is a single-purpose, track-only variant of the just-released street version that has attracted more recent attention among Porsche enthusiasts than even the GT3, which awaits the forthcoming RS version to up the ante of that model range. Those who’ve ever driven a civilian-issue Cayman acknowledge that, compared to the larger 911, the mid-engined car’s smaller size and lower weight brings definite advantages. With its 4.0-liter, naturally aspirated flat-six power plant and nearly 500 hp in street trim, the latest 718 Cayman GT4 RS is the most powerful and capable Cayman ever.

What any other 718 Cayman GT4 RS won’t feature, though, is a unique livery by Williams, the legendary painter who has been the poster-boy of West Coast Outlaw culture since the mid-1960s. Williams, who was already an established fine artist when he joined the art studio of Ed “Big Daddy” Roth (creator of the character Rat Fink), became the custom car builder’s art director. Fueled by prevailing anti-war sentiment and the counter-culture movements of the time, Williams’ art became world famous, appearing in Zap Comix, on movie posters, trading cards, surfer art and throughout the hot-rod community. In 1994, Williams and a group of other artists founded the magazine Juxtapoz to champion Southern California pop culture, and it’s going strong today.

A detail from the 1993 painting “Cowboys & Amoebas” featured on the car.  Photo: Courtesy of Brooke DeBoer, Aaron Kahan and AutoMoto.

Now his circa-1993 painting, Cowboys & Amoebas, will raise eyebrows at the racetrack as it dresses TRG’s GT4 RS Clubsport, complete with its rainbow-palette of psychedelic characters, hot rods and otherworldly action. While wrapping street and track cars is common today, few projects require such artistry in concept and precision in application as does one of Williams’ complex paintings. Cowboys & Amoebas was adapted to the Porsche bodywork by AutoMoto creative director Aaron Kahan, who worked closely with the 79-year-old Williams. Nick Sigfried and Jay Garcia of Paint Protection Fanatics expertly wrapped the fresh-off-the-boat Porsche with 3M film printed by Thumbprint Digital, just in time for AutoMoto’s unveiling on March 26 at the Market Tavern, a West Los Angeles institution located in the Original Farmer’s Market.

Ask driver Derek DeBoer what time it is and chances are he’ll look at his B.R.M chronograph to tell you. B.R.M has been a champion of US motorsport teams since the French watchmaker teamed up with DeBoer in 2014. For the occasion of TRG’s new look for 2022, and to celebrate the art of Williams, B.R.M partnered with AutoMoto to create four limited-edition wristwatches whose faces feature the artist’s paintings in the round.

Reproduced in precise detail is Cowboys & Amoebas and three other fantastical paintings in miniature. With a titanium case and available in automatic and chronograph movements, the timepieces are CNC-machined and manufactured by B.R.M in France. A custom box and a lithograph hand-signed by the artist accompanies the numbered watches. Available through Automoto, the four versions are limited to 13 examples each and priced from $11,950 to $16,950.