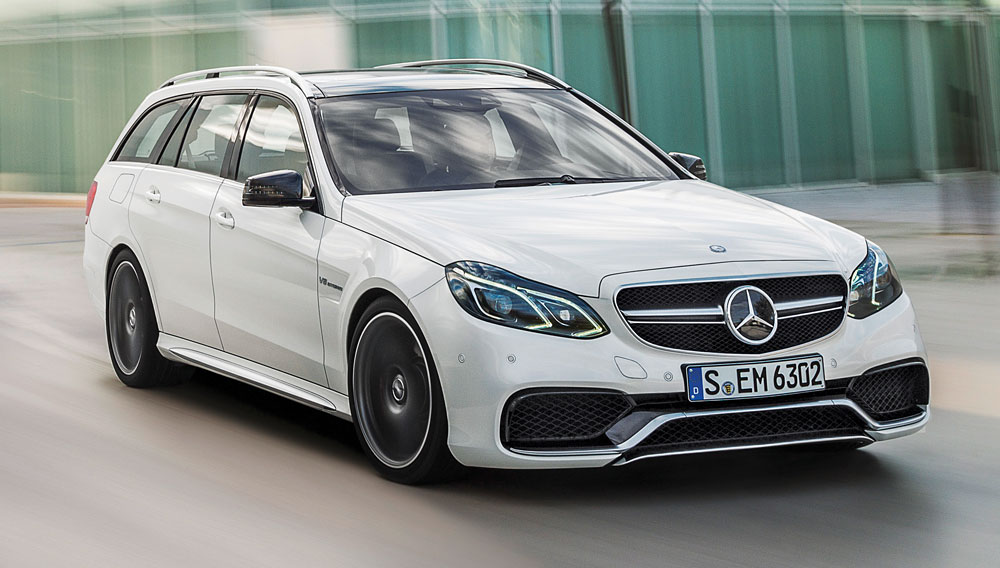 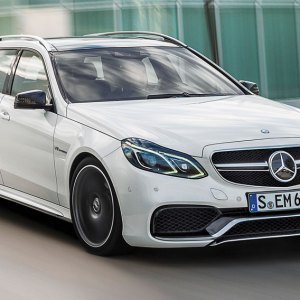 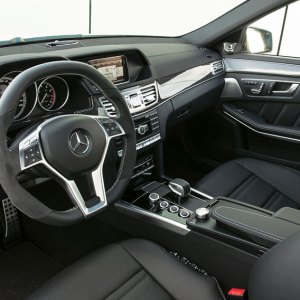 The 2014 Mercedes-Benz E63 AMG S 4Matic wagon is a novelty, but not just because it is a 577 hp station wagon. (By comparison, the standard E-Class wagon, the E350 4Matic, has a 302 hp V-6.) AMG vehicles traditionally have offered sledgehammer performance—as the E63 AMG S 4Matic wagon does—but often have lacked an equal amount of finesse. This is not the case with the new wagon and its sedan counterpart, in part because they are the first models in the AMG range (excluding the SUVs) to be equipped with Mercedes-Benz’s 4Matic all-wheel drive. The system sends power to the front and rear tires at a fixed 33/67 split (front/rear). AMG engineers also widened each model’s front track by 1.9 inches to improve stability at high cornering speeds, and they sharpened the turning ratio of the speed-sensitive, electromechanical steering.

The wagon’s 5.5-liter biturbo V-8 provides enough power for the vehicle to reach an electronically limited top speed of 186 mph and to accelerate from zero to 60 mph in 3.5 seconds. The most comparable vehicle, Cadillac’s CTS-V Wagon, is powered by a 556 hp supercharged V-8 that enables a zero-to-60-mph time of 4 seconds. The Mercedes-Benz is more potent and quicker than the Cadillac, but it also is pricier. The E63 AMG S 4Matic wagon has a starting price of $102,370; the CTS-V Wagon starts at $64,900. Deliveries of the Mercedes-Benz began in September.

Mercedes-Benz has been selling wagons in the United States since 1980, when the diesel-powered 300TD arrived. It quickly became a favorite family conveyance in affluent communities from Atherton, Calif., to Greenwich, Conn. As the gas crunch eased in the ensuing decade, the stout but clattering and foul-smelling diesels fell out of favor. And the entire station wagon species nearly became extinct following the advent of truck-based minivans and SUVs. But even as Mercedes-Benz entered the SUV market with its M-Class and GL-Class vehicles, it continued to produce full-size wagons for U.S. drivers, unlike fellow German manufacturers BMW and Audi, which withdrew their wagons from the market.

The E-Class wagon debuted in 1986 (though Mercedes-Benz did not use the E-Class moniker until 1994) and first received the AMG treatment for the 2007 model year. The E63 AMG wagon was overhauled for the 2010 model year and then updated again for 2014.

The latest generation of the AMG wagon is big but nimble and has a propensity for speed and fun. Thanks to the 4Matic system, traction is superb, and the direct and quick steering encourages drivers to send the car diving into corners. The suspension strikes an ideal balance: It communicates important news to the driver but not every detail of the road surface. The engine is a marvel, burbling at idle with a patient menace. When provoked with an open throttle, the engine thrums with intensity while the biturbos whistle. At full tilt, the wagon’s power is relentless; the vehicle sounds and feels like a cigarette boat charging through an ocean of pancake batter.