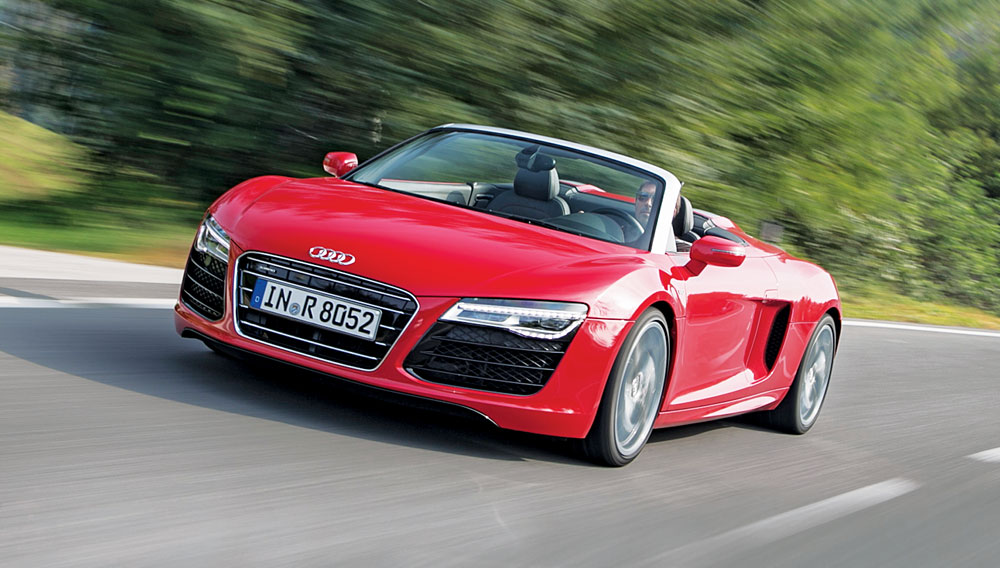 Sometimes the fanfare created by one’s arrival in an Italian or British exotic is inappropriate for the occasion. Even when parked and silent, the angular missiles from Ferrari, Lamborghini, Aston Martin, and McLaren can be as loud as a plaid suit at a wake. Audis are made for understated entrances, for when a more sober countenance is preferred. Even the company’s supercar, the R8, walks softly, but it delivers a colossal kick. And with a base price of about $171,000, the latest and most powerful convertible version, the 2014 R8 V10 Spyder, runs up a modest bill compared to some competitors—especially those with performance-to-price ratios that are half as good as the Audi’s.

Since its introduction in 2008, the R8—in various iterations—has been a standout in Robb Report’s Car of the Year and Best of the Best competitions. Through the years, Audi has continually refined the model, and the current versions are the best yet. These include the coupe and Spyder, both of which are available with a V-8 or V-10 engine. All of the models are equipped with the standard 6-speed manual or the optional new 7-speed, dual-clutch S tronic transmission. The latter delivers smoother shifts, quicker performance, and greater efficiency than the single-clutch R tronic gearbox that it has replaced. Audi also offers the V10 Plus model, which was a Best of the Best honoree this year. It has more power and less weight than the base V10 and is available only as a coupe.

When equipped with the S tronic transmission, the V10 Spyder scoots from zero to 60 mph in 3.6 seconds and reaches a top speed of 193 mph. Those performance figures place the Audi midpack among supercars, but the Spyder’s performance is better measured by the effortless, seamless shifts that contribute to the nearly telepathic communication between car and driver.

The 5.2-liter V-10 develops 525 hp and 391 ft lbs of torque. It has an impressive rev limit of 8,700 rpm and, when combined with the S tronic transmission, a wide and flexible power band. The trademark Quattro driveline delivers power to all four wheels, proportionally as required; think of the Spyder as a nearly 3,800-pound slot car.

The Spyder’s chassis, subframes, body, and drivetrain all include aluminum, which provides structural and power-to-weight benefits and enables the precision construction for which Audi is known. Perfectionists will notice panel gaps and a paint finish that set the industry standard. The Spyder used for the test-drive was painted Estoril blue with a crystal effect that caused the car to shimmer in the sun like a giant jewel beetle.

The exterior updates that Audi added across the R8 line are minor, but they are apparent when a 2014 model is parked next to its older siblings. The changes include—most noticeably—redesigned LED lights front and rear, a slightly revised grille that recalls that of an Auto Union Grand Prix racer, new R8 badging and wheel designs, and reshaped rearview mirrors and tailpipes. The R8’s interior includes a thicker steering wheel and various new leather options—such as diamond-pattern stitching on the seats—that embellish the cabin’s relatively stark design. The test-drive Spyder’s lunar-silver napa leather is a $3,500 upgrade that was combined with optional $1,700 piano-black decorative inlays. The pairing was a pleasant alternative to the serious, black business attire found in most sports-car interiors.

Thanks to Audi’s state-of-the-art engineering, the Spyder can deliver blistering performance. Yet it is also a supremely comfortable car that is easy to drive, easy to live with, and priced to represent value. If two seats are sufficient, this could be your daily driver.