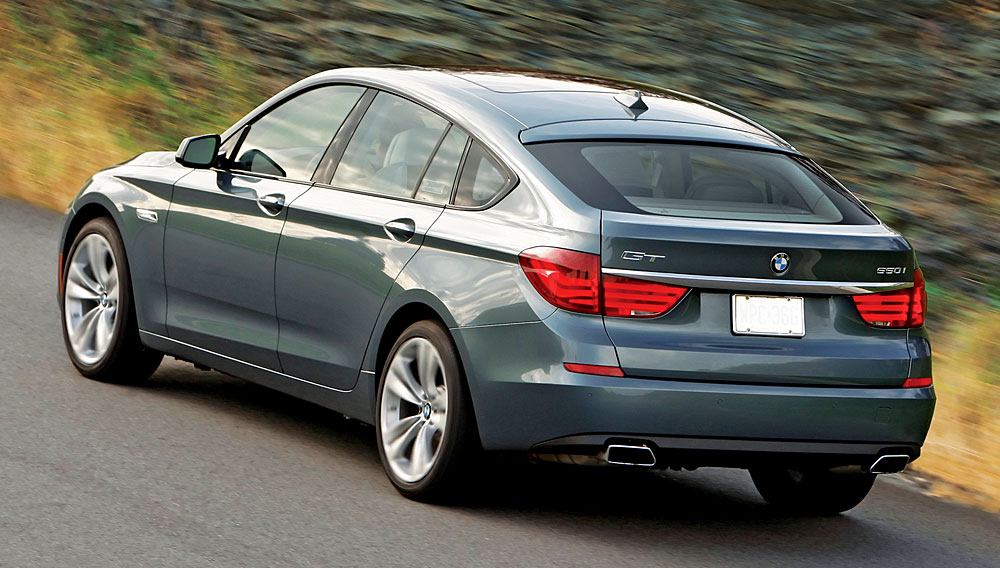 BMW’s new 5 series GT is a rare thing indeed. It is a concept that not only deftly avoids conventional pigeonholing but one that also constitutes its own category. The strategy behind the GT is simple: to deliver a vehicle that combines the load-lugging versatility of an estate wagon with the people-carrying capability of a minivan—all without the social, visual, or performance shortcomings inherent in both.

At almost 16.5 feet long, the GT is big, but deceptively so. In the isolation of a showroom or garage, it appears low, lithe, and sleek; but on the road, it dwarfs regular sedans—hardly surprising, given that it shares much of its underpinnings with the new 7 Series, including that car’s vast 120.9-inch wheelbase. The sharklike, forward-leaning nose; piercing headlamps; raking windscreen angle; and creased flanks may earn kudos for design, but the GT’s bloated rear will try the loyalties of even the most fervent BMW fans.

This heavy-handed styling accommodates the GT’s double-hinged tailgate, which allows the driver to access the vehicle’s loading bay using one of two releases. One opens a yawning high-rise tailgate that is perfect for stowing bulky items; the other reveals a smaller sedan-style trunk. The smaller opening keeps the passenger compartment sealed against the elements in inclement weather. Owners get the advantages of both a hatchback and a traditional trunk in one rather large package.

If the exterior styling falls short of an aesthetic epiphany, the interior compensates. Expansive and expensive-looking, the sumptuous cabin is pleasantly airy, thanks to its standard-fit full-length sunroof. Passengers enjoy decadent expanses of leg and head room, while every touchpoint is covered in the softest of leathers or the glossiest of woods.

The rear-wheel-drive GT also handles with BMW’s typical on-road élan. Designed with four-wheel steering, the GT may be big and heavy—it weighs in at 4,440 pounds—but it feels agile from behind the wheel. Its responsive steering and tight body control enable the vehicle to sew bends together with satisfying accuracy. It is brisk, too. We tested the 535i version, powered by a 306 hp twin-turbo 3-liter gasoline engine. The silken, straight-six power plant delivers effortlessly muscular performance, rocketing to 62 mph through its 8-speed automatic transmission in just 6.3 seconds. A more potent 550i model outfitted with a 407 hp 4.4-liter V-8 is also available for those in a rush.

Rather surprisingly, the GT rides just like a sumptuous cruiser. The vehicle tackles the lumps and bumps with none of BMW’s trademark stiffness, and its three-way adjustable air suspension does an excellent job of sponging away all but the severest road intrusions.

The GT impresses in all respects except appearance. Still, its principal shortcoming is not what it is, but rather what it is not. It is not a wagon, a minivan, a crossover, or even an SUV. Mention any of these categories, and BMW’s marketing denizens visibly wince at the very notion of a family lugger with a blue-and-white propeller on its bonnet. But forget the manufacturer’s party-of-one marketing spiel and the car’s rear end, and the 5 Series GT might jump to the top of the ultimate family car list.