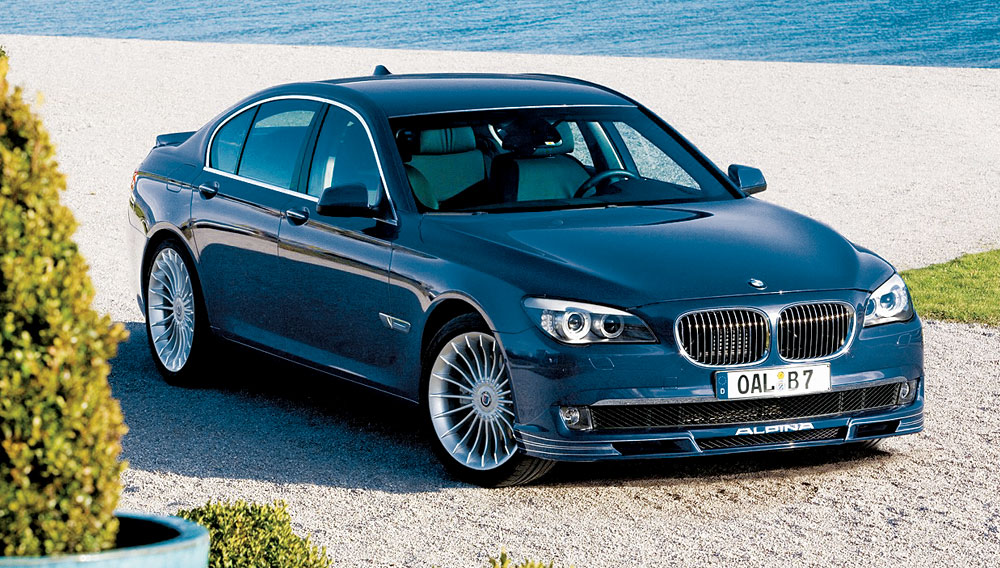 Older fans of the roundel know that BMW’s rise from the rubble of World War II to its current status as a world-class luxury-performance brand is the most remarkable success story among all the European marques. The company that hung its postwar hat on odd microcars such as the Isetta quickly leveraged its engineering prowess and market opportunity in the 1960s to launch a transformational sport sedan that became a game-changer for the industry. No one who grew up with these capable cars wonders at the fact that the 1600 and its successor, the 2002, spawned an extended family of “ultimate driving machines.” Alpina—?a tiny company that has been instrumental in BMW’s competition success since the early 1960s—played an active part in this evolution and continues to produce ultimate BMWs today in its factory in Buchloe, Germany, about 50 minutes by car from the BMW headquarters in Munich.

Alpina’s current offering in North America is the B7, a limited-production 7 Series tuned and tightened to become the most exclusive, athletic, yet still comfortable iteration of BMW’s flagship sedan. After the bulk of the B7’s manufacturing is completed to Alpina specifications on the BMW factory lines, the car is shipped to the Alpina plant for skill-intensive production sequences. What emerges is an Autobahn cruiser that feels equally at home on high-speed, straight-line runs as on challenging S-curves or the racetrack.

The 4.4-liter, twin-turbocharged V-8 engine delivers 500 hp at 5,500 rpm, with 510 ft lbs of torque between 3,000 and 4,750 rpm. Engineering improvements include enlarged turbochargers, remapped engine and transmission software, cooling modifications, a heavy-duty 6-speed automatic transmission and drive shaft, and an Alpina exhaust that boosts performance—not undignified noise. Stiffer springs and a lower ride height do not compromise comfort, while taller brake pads and bigger calipers reside behind some of the industry’s lightest and most exquisite 21-inch wheels.

Inside, the steering wheel and special woods, leathers, trim, and instruments distinguish the B7 from standard BMW 7 Series cars. Short- and long-wheelbase versions, with rear- or all-wheel drive, are available. Aerodynamic front and rear spoilers and valances unique to the B7 reduce lift and improve cooling all the way to the car’s electronically limited 174 mph top speed. Indeed, this remarkable performance car made its qualifications apparent at Infineon Raceway in Sonoma, Calif., where Robb Report had an opportunity to throttle the B7 at speed—and later ride along while the vehicle was in the capable hands of Alpina owner Andreas Bovensiepen, whose racing skills are commensurate with the liberties he took on the track.

With a sticker price upwards of $125,000, the B7 invites obvious comparisons to BMW’s V-12-equipped 760. However, while the 760 remains relatively common, only a limited number of B7s will be made available in North America. What is more, the B7 offers infinitely greater appeal to the driver who loves to drive—and who wants a big car made in minuscule numbers that magnifies the mystique of a now-ubiquitous automotive benchmark.