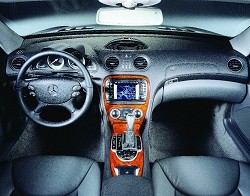 I remember sliding Lee Morgan’s The Sidewinder into the 2003 Mercedes-Benz SL500’s CD player and hearing the first blasts of his trumpet playing through the eight-speaker Bose system. The SL500 merges onto the highway, and the 302-hp engine, hushed at first, swells into full song, rocketing the car into the flow of traffic. As the SL500 approaches a cruising speed of 80 mph, the engine becomes quiet again.

Distracted by the V-8 engine’s growl and impressed by the smoothness of the car’s acceleration, I didn’t hear a single note from the rest of the CD’s first track. Morgan is now playing “Totem Pole,” a mellower tune than the upbeat, staccato first piece.

It’s clear that, though built to be driven, the SL500 is also a machine meant to be heard. Turn off the sound system and instead enjoy the symphony of sound from the engine—sometimes visceral, at other times barely perceptible—which makes this elegant coupe such a pleasure to drive.

At low speed, the 5.0-liter engine hums softly, its tone complementing the muted shlicka-shlick of the windshield wipers, whose rhythm shifts to match the rain’s changing rate. With a gentle push on the accelerator, the V-8 grows louder, more of a growl than a purr. Still, at 90 mph on the highway, the SL500 sounds and feels as though it’s going 30. The needle hovers between 2,500 and 3,000 rpm, but all you hear are the turn signal’s clicks and the barely audible thumps when the Mercedes glides over cracks and potholes.

Exiting the highway, the SL500 carves through the turn. The rain has stopped, and I pull back the switch on the center console to bring the hard top down. Eleven hydraulic cylinders begin to whir, and 16 seconds later the coupe has become a convertible. I pick up a friend, and as the SL hits 50 mph, we continue to chat as if we were in a café. The wind tosses our hair, but our conversation goes undisturbed. As powerful as it is, the SL is also polite.