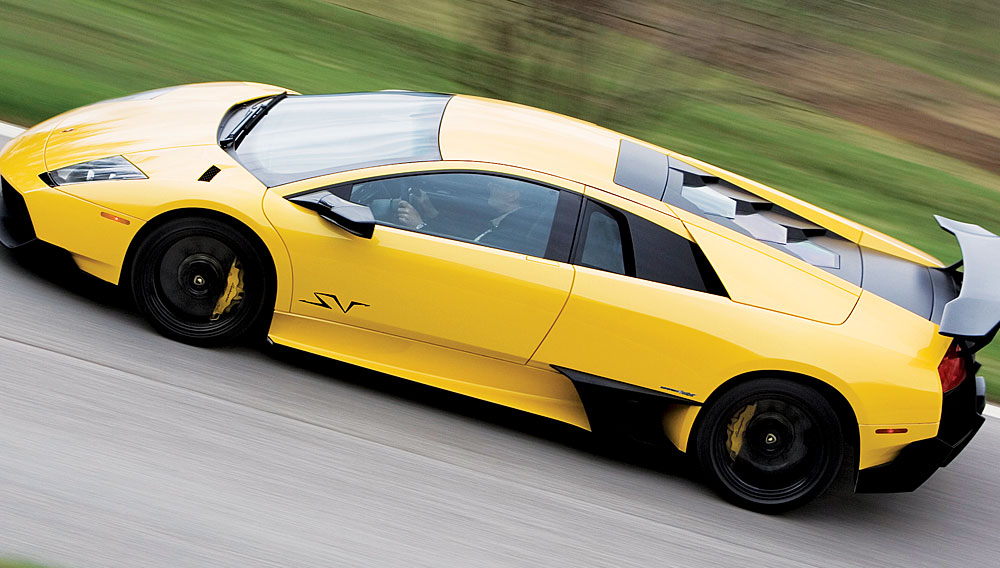 Under normal circumstances, driving a Lamborghini Murciélago at top speed provides enough excitement for one day. Twelve cylinders wailing away behind your head as you floor the accelerator is enough to get anyone’s adrenaline pumping. However, the circumstances under which I drove this latest, lightest Murciélago were not exactly normal. The sun had just set on southern Italy’s bucolic landscape as I eased the Murciélago LP 670-4 SV onto the five-lane-wide, 7.8-mile-long track at the Nardò Technical Center. Even in the gloaming, certain design elements stood out brightly. The SV is leaner, for example. This model, which will list for around $450,000, has shed 220 pounds thanks to carbon-fiber alterations to its chassis, interior, and engine and drivetrain. Also, a conspicuously elevated rear wing offers proof that the LP 670-4 SV is not a garden-variety Lamborghini.

That alphanumeric mouthful indicates the car’s longitudinally aligned, posterior-mounted 670-brake-horsepower engine (661 hp by American measurements) and four-wheel-drive system. But it is the SV suffix—for SuperVeloce, or super fast—that truly sets this car apart. The 6.5-liter V-12 powering the SV has revised valve-timing, intake, and exhaust systems that deliver 30 hp more than the LP 640-4. Gear changes are also a bit quicker, and Lamborghini claims that the SV will accelerate to 60 mph in 3.2 seconds on the way to a top speed of 212 mph with the optional small spoiler, or 209 mph when equipped with the gigantic Aeropack wing.

Though they will have to sacrifice 3 mph of peak pace, serious drivers will opt for the Aeropack. The big fixed wing provided enough downforce to keep the rear end planted while cornering on Nardò’s 16-turn handling track. (The base Murciélago occasionally shakes a bit around hairpin turns.) Carbon-ceramic disc brakes cased inside 18-inch wheels stand at the ready, but braking is not always required. In addition to adding stability, the rear wing acts as an air brake; to coast to a crawl, you can lay off the throttle and let drag take over.

Running clockwise around Nardò, the left lane gets bumpy between the three- and four-kilometer markers; the SV bobbed gently on its dampers like a speedboat clipping the waves. Piloting the arc was point-and-shoot simple. “We tuned the steering for high-speed sensitivity,” says Maurizio Reggiani, head of Lamborghini R&D. True to Reggiani’s word, the SV’s on-center feel was precise and responsive at what would be above takeoff velocity for a Boeing 737. By the time I passed the five-kilometer marker, there was nothing to do but sit back and watch the track’s broken white lines blur together.

When I pinned the accelerator to the floor and quickly nudged the speedometer near its 210 mph maximum, my passenger—a Lamborghini Driving Academy instructor—raised and dropped his left hand, gently reminding me to return to the posted 150 mph limit. Not that I blame him: Supercars always seem to move a little faster from the passenger’s seat.