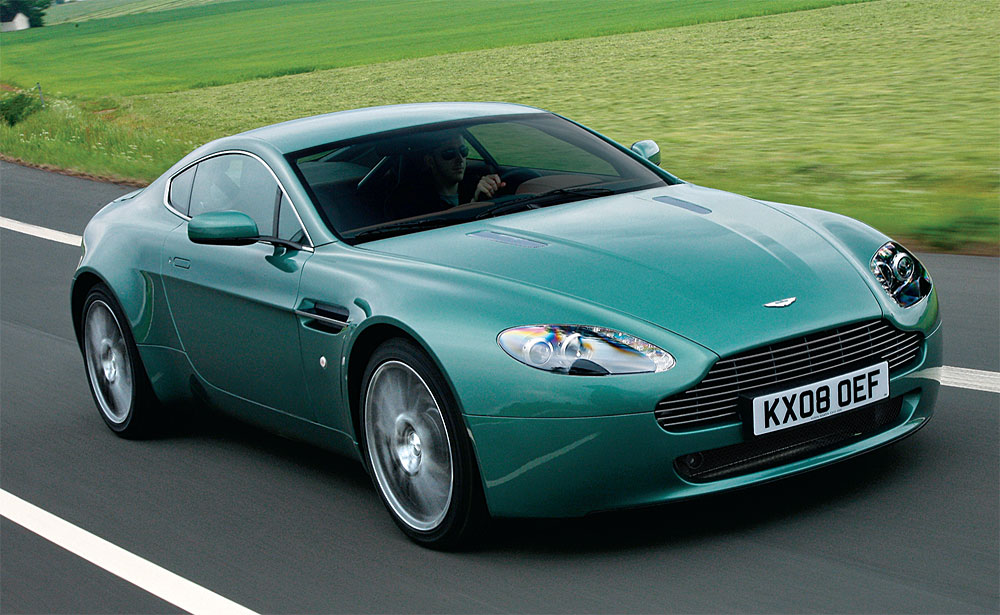 As I short-shift out of the Porsche Curves toward the start-finish straight at Le Mans, I uncork a lifelong fantasy: to drive under the Dunlop Tire bridge—the most famous photo prop in motorsports—with spectators in the stands. I realize this dream while piloting the 2009 Aston Martin V8 Vantage on the 8.5-mile Circuit de la Sarthe, a day prior to this year’s 24 Hours of Le Mans endurance race.

While hammering out of Tertre Rouge and aiming down the throat of the Mulsanne Straight at 140 mph, I am plagued by only one concern: Will the safety car ever get out of the way? Alas, it maintains its lead, but it also sets a pace competitive enough to squeeze maximum exhilaration from this second-generation Vantage—a higher-powered, better-balanced, more driver-friendly descendant of the DB series.

The V8 Vantage has that rare distinction of being a luxurious, cushy, two-seat sports car that maneuvers as securely and smoothly at 180 mph as it does while heading politely to Paris for a pastis. It is unquestionably the gymnast of Aston Martin’s grand touring cars, one that has always felt remarkably small and lithe—neither overpowered nor undermanageable. Perhaps that is why Aston Martin has sold 10,000 V8 Vantages—or just fewer than a quarter of the 45,000 cars built by the British company in its 95-year history—since the model’s introduction three years ago.

Aston Martin’s success with the V8 Vantage explains the lack of exterior changes for the 2009 model. The original design, after all, is a potential automotive Hall-of-Famer. Apart from 18-inch, 20-spoke artillery wheels (a performance package option offers 19-inch wheels with five split spokes), the old and new versions are indistinguishable from one another.

Inside, the 2009 model features a new zinc-alloy center console panel and brushed-aluminum switchgear. One update, which comes from the DBS supercar, replaces last year’s starter key. The plug—made of glass, stainless steel, and polycarbonate—slots perfectly into the dashboard, but it must be pressed precisely to engage the starter. If not clicked properly, it will pop out and fall into your lap—or worse, into that Bermuda Triangle between the seat and transmission tunnel.

Steering, although adequate before, has been modified to feel superbly sensitive. To improve handling, Aston Martin revised the Vantage’s damper mounts, stiffened the spring rates, and updated the clutch and flywheel.

The Vantage’s improvements combine to deliver a comfortable ride, whether on the country roads of the Loire Valley or around the Porsche Curves at Le Mans. The 6-speed automatic is not quite F1-slick, but when I pull the paddle in Sport mode—where the system holds gears all the way to redline—I swear I can hear the crowd cheer.