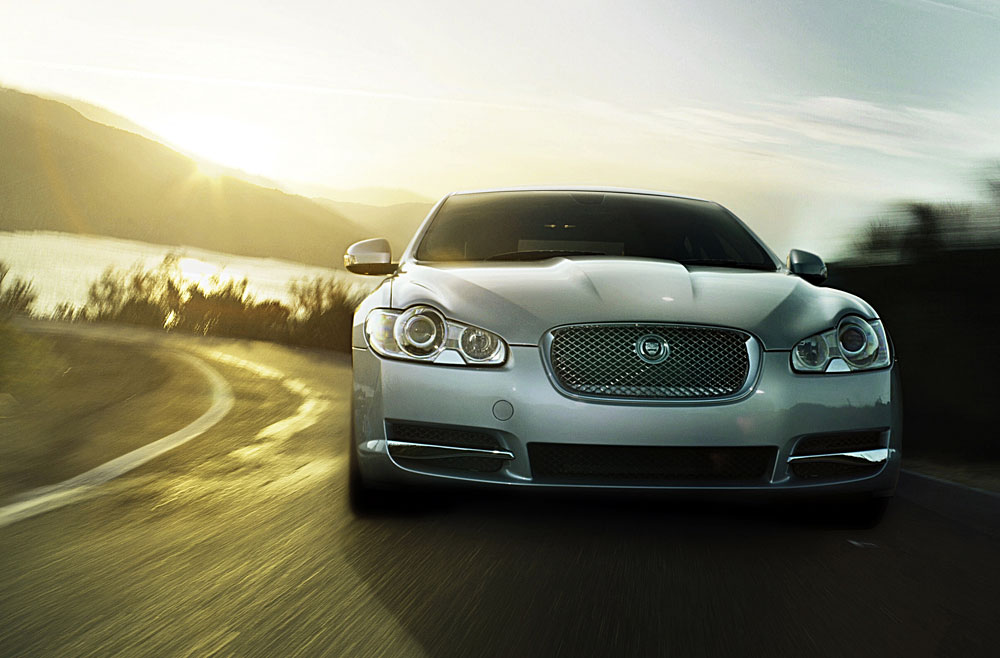 Gently prod the start button and it glows red, then pulses, like a beating heart. Touch it again and the overture becomes a performance as the cushioned explosion of a big V-8 smoothes into a grumble.

Now the Jaguar XF sedan is poised to romp, and to deliver more élan—with higher levels of luxury, exclusivity, and pure driving satisfaction—than has come from Castle Bromwich in a decade.

“Is this necessary?” asks Ian Callum, who designed this car, as well as the Jaguar XK and the Aston Martin DB7. “Probably not. But is it fun? Yes.”

For where is it written that automobiles must be practical? Callum believes that form follows function, that the two relate not as separate elements, but as concurrent considerations “that work together” to produce “a very subtle car with a lot of things going on.”

Mike O’Driscoll, managing director of Jaguar, shares Callum’s faith in the amusement factor. “We’re not entirely in the transportation business,” he notes. “We’re also in the entertainment business—driving entertainment.”

Dumping the cheap, cheerless X-Type (based on the Ford Mondeo) and the Jaguar S-Type (a rebadged Lincoln LS) makes room for the entertaining and pricier XF to move uptown. Better yet, the car is again all-Jaguar: pure of heritage with a chassis and power train crafted in Blighty by Brits.

Although the XF shows several similarities to ’50s through ’70s Jaguars, retrospective design has not been slopped on with the trowel, but rather suggests a new, refreshing look that actually began with the shape of the 2006 XK.

All of this is encouraging, for since being acquired by Ford in 1989, Jaguar has seen more new starts and regressions than do rock stars in rehab. Despite such hesitations, the XF strides in a promising direction as a roomy midsize luxury sedan with the pace and taut handling of a sports car.

Its styling is far from conservative. The roofline is low and looks like that of a coupe, with the windshield’s rake matching the slope of the rear window. The backside is carried over from Callum’s XK: blunt, broad, and sensually rounded. Should anyone doubt the car’s provenance, its trunk carries a leaping kitty logo larger than a Maine coon. Standard Jaguar fare—premium woods, perfect leathers, and lifelong fabrics—also has been transferred to the XF cabin.

Power is by the venerable 4.2-liter, 300 hp V-8—the same engine used in the XK. A heftier, supercharged version delivers 420 hp, but the lighter, less powerful model may be more fun to drive. Steering is just a whisker more precise on turn-ins, and braking, despite larger rotors on the supercharged car, feels stronger. What a difference 177 pounds makes.

Still, the car makes a case for itself with added equipment and a one-second advantage getting to 60 mph (5.1 seconds versus 6.2). Optional are 14-speaker surround sound by Bowers & Wilkins; blind-spot monitoring radar; and a rear-mounted video camera for deft parking—for a base price of about $50,000, or $63,000 for the supercharged version.

Appropriately, the global launch of the XF took place in Arizona, where the real feline is indigenous. Legend has it that jaguar comes from yaguara, the Native American word meaning “the killer which overcomes its prey in a single bound.” Despite its fearful reputation, jaguar the beast, rather like Jaguar the car, remains an endangered species.