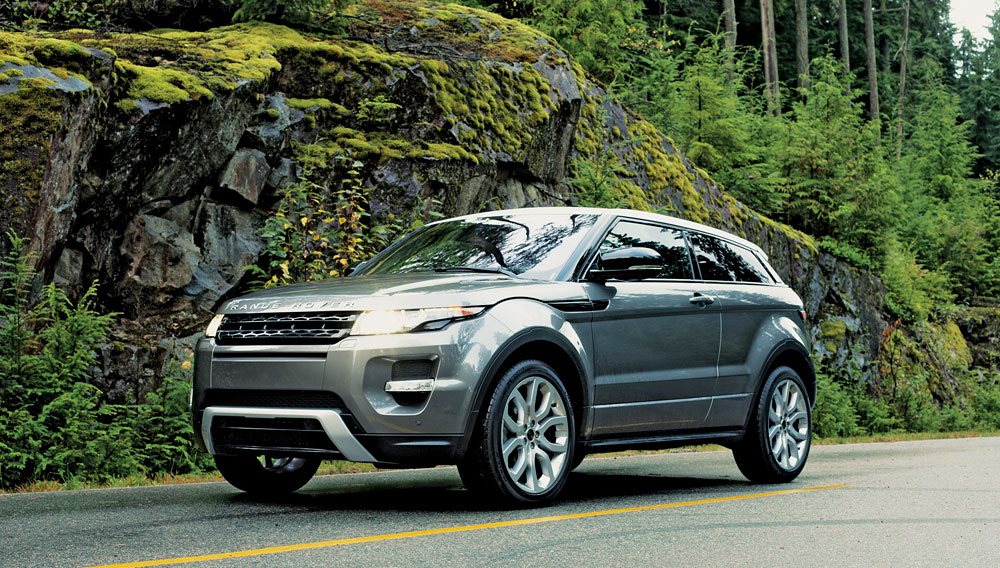 If Ferrari can be moved to design a station wagon and Porsche pressured into offering a sedan and a hybrid supercar, then it should startle no one to learn that Range Rover has built an SUV that is not shaped like a tea caddy. The buffed, rounded, long-tailed, and thoroughly contemporary Evoque marks the brand’s unconditional surrender to drivers’ increasing concern with practicality and petrol consumption. Thus this stunner comes to market lower, shorter, lighter, and more fuel-efficient (28 highway mpg) than any previous Range Rover.

While the vast majority of SUVs sold in the United States are powered by thumping V-8s, the Evoque, which is available with two doors or four, uses a more environmentally correct four-banger that is turbo-puffed and develops a respectable 240 hp. The back of a Range Rover once could accommodate the carcass of a 16-point stag, but the Evoque offers room for just a pair of larger Louis Vuittons. Gone with the extra cargo space are the imperial seating positions that were lofty enough for the arrogant to look down upon the lower classes and Honda CR-Vs. Also missing are the grit, grip, and rhino-climbing ease with which traditional, heavyweight Range Rovers perform cross-country and up cliffs.

Despite the absence of these features that one expects from a Range Rover, the Evoque is no corner-cutting compromise. From its clamshell hood to its panorama roof, from its full-time all-wheel drive with Haldex center differential to its pitch-perfect hill-descent and terrain-clearance systems, the pretty little rascal remains a Range Rover proper. Even the pricing—starting coyly at $44,000 for the ground-floor four-door version and rising to nearly $53,000 for a heavily optioned two-door—helps to preserve the panache-cum-snob appeal that Range Rover owners demand.

Land Rover, the British company (owned by India’s Tata Motors) that makes Range Rovers, chose Vancouver, British Columbia, for the Evoque’s media launch, allowing drivers to motor on- and off-road and through September snows on a 7,000-foot climb to the ski mountains of Whistler and Blackcomb, sites of the 2010 Winter Olympics. On the blacktop, the Evoque behaved more like a sedan than an SUV, thanks to a lowered center of gravity. It floated less and handled tighter than any other Range Rover. Bucking muddy grades, slushy hollows, and shallow snowdrifts proved the Evoque is capable in adverse conditions but that it lacks the all-conquering skills of older Range Rovers. It does not have enough weight for that, or enough grunt.

Nevertheless, the development team at Land Rover is to be applauded for realizing that the boxy Range Rover line needed an overhaul to remain relevant, even if that meant reducing the vehicles’ incredible off-road capability—which, in reality, few if any drivers ever use.