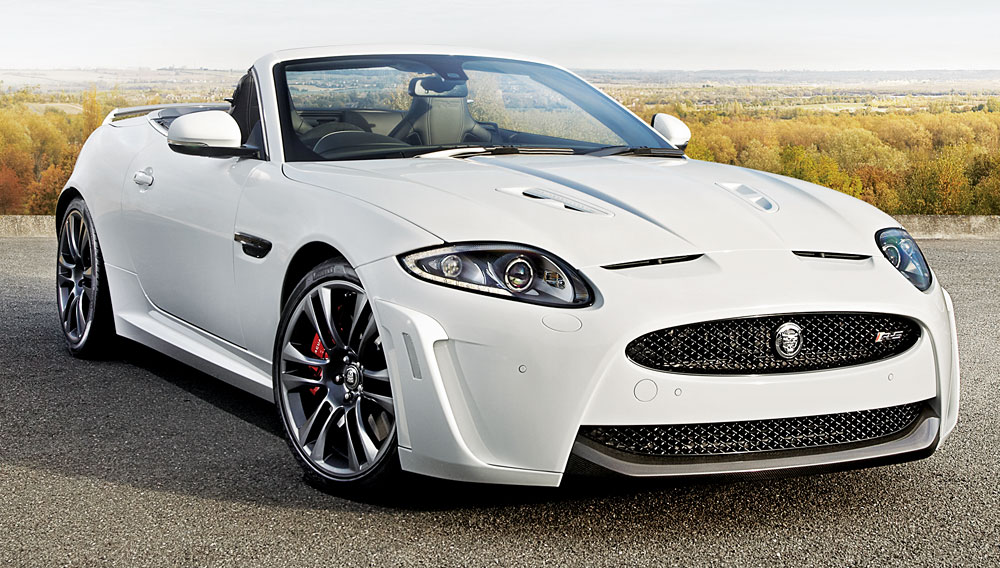 In a race for pinks between Jaguar’s supercharged 550 hp XKR-S convertible and a U.S. Navy F/A-18 Hornet, an aircraft that produces 36,000 pounds of thrust, which would win?

For an hour one day in February, Navy air-traffic controllers closed the main runway at Southern California’s Naval Air Facility El Centro, the winter home of the Navy’s Blue Angels precision-flight squadron, so that members of the media could pound through top-speed runs in Jaguar’s new XKR-S coupe and convertible. Jaguar reps invited the writers to see for themselves that these twins are indeed the company’s most powerful and fastest production cars ever. But they did not let anyone actually run door-to-door with an F/A-18 down El Centro’s 9,500-foot tarmac. Writers raced the jet in theory: The F/A-18’s performance statistics are sufficiently documented to allow accurate comparisons without risking fender benders between a $138,000 automobile ($132,000 for the coupe) and a $30 million jet fighter.

The XKR-S is Jaguar’s halo car—more GT and luxury convertible than sports car. It follows the basic XK—a 385 hp, mostly aluminum lovely introduced in 2007—and the supercharged 510 hp XKR. The XKR-S is the jewel in the line, closing out an XK generation before a redesigned model arrives sometime in 2015.

Until then, drivers can enjoy the delightful duality of the XKR-S coupe and the total exhilaration of the convertible. With cheek flares managing side airflow, a carbon-fiber front splitter and rear spoiler, and blacked-out wheels, both models appear suited to club racing or rented laps at the Nürburgring. The interior’s brushed-aluminum and carbon-fiber trim maintains the race-ready look, while the leathers and quality brightwork retain Jaguar’s traditional Park Lane–gentlemen’s club feel and smell.

The convertible’s performance—a zero-to-60-mph time of 4.2 seconds and a top speed limited to 186 mph—is worthy of Goodwood and the British Grand Prix. Though it is a soft-top, the car is rigid and weather- and sound-resistant and suffers none of the chassis shakes that plague lesser convertibles. Lowering the top amps up the acceleration sounds to an impressive swoosh and high-speed rush.

At El Centro, the rules for racing against the imaginary F/A-18 were simple: Go flat out from the flag to the runway’s 4,000-foot markers. Then, with 5,500 feet of runway ahead, let the car roll out before braking and possibly cooking the pads. With the weedy edge of the runway as a starting point (the greater the distance, the higher the terminal speed), the car’s 6-speed transmission set in automatic, the drive controls in Dynamic mode to extend shift points closer to red line, and a tailwind of 10 mph, our XKR-S reached 176 mph—fast enough to reach the 4,000-foot markers ahead of the jet fighter.

Seconds later, of course, the jet would have smoked us and climbed into the air. Still, the Jaguar’s performance left one wondering where the Navy keeps the pink slips for its F/A-18s.