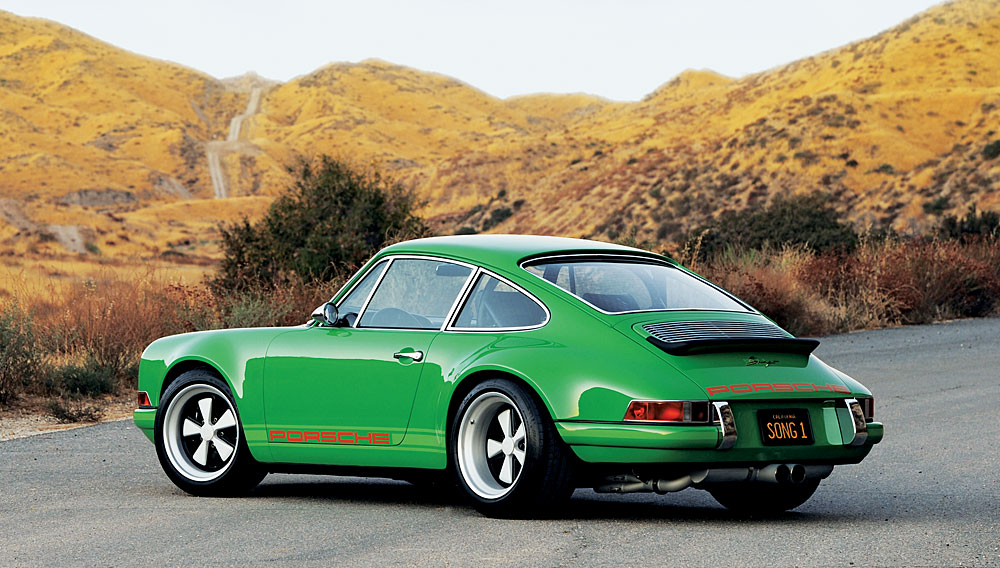 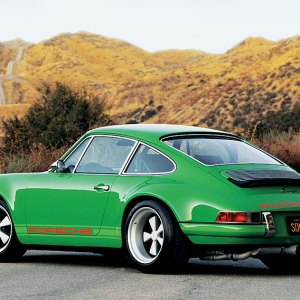 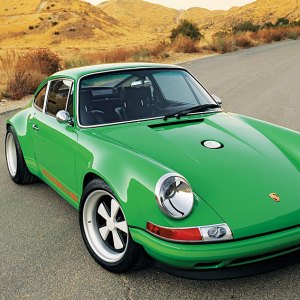 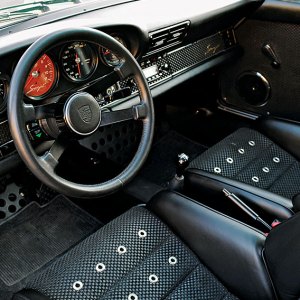 Devotees of Porsche’s 911 might appreciate the automaker’s efforts to maintain the rear-engine sports car’s performance at a state-of-the-art level as it nears its 50th anniversary. But most never have fully forgiven Porsche for replacing the car’s air-cooled engine with a liquid-cooled model in 1998, an alteration necessitated by tightened international emission- and noise-control regulations.

Fans of the marque still pine for the distinctive mechanical clatter and whirring fan of the air-cooled flat six. Many also prefer the simpler silhouette and lighter, nimbler feel of the early 911s, the versions from the 1960s and ’70s.

Count Rob Dickinson among these enthusiasts. His obsession with the 911 began when the Englishman was 5 years old and a green 1970 911S Targa whizzed past the family car. That fascination inspired him to pursue a career as an automotive designer with Lotus—until he became a rock star. In the 1990s, Dickinson was the vocalist and guitarist for the alternative rock band Catherine Wheel, which enjoyed considerable airplay in the early ’90s with “Black Metallic,” its biggest hit. Dickinson went solo during the last decade, touring and recording albums under his own name and collaborating in studio and in concert with other performers.

“In my years as a rock musician, I got to sample some great 911s,” says the 45-year-old Dickinson. Driving those cars eventually led to his establishing Singer Vehicle Design in the Sunland section of Los Angeles and developing the Singer 911 Concept, a prototype that he unveiled last year. “Turning 30 years of passionate obsession into a business is as fascinating as I hoped it would be,” he says.

Although the 911 Concept resembles a 1970s-era 911 racer, Dickinson emphasizes that it is not an imitation, clone, or retro hot rod. He defines it as a fusion of the purity of the original, air-cooled 911 and modern materials, design improvements, updated technologies, and aftermarket experience. It is, Dickinson says, a sports car that captures the essence of what many consider the golden years of the 911.

Since introducing the 911 Concept, Singer has built two customer cars based on the prototype and was working on a third in October. Those first two production cars are virtual clones of the 911 Concept and sold for about $300,000 each. The base model Singer 911 has a starting price of $175,000, which rises with the addition of options from the carmaker’s à la carte menu.

The foundations for all of the cars are road-legal, late-1980s 911 Carreras, which are stripped bare, rustproofed, and extensively strengthened and stiffened. The Singer crew removes the exterior panels, including the bumpers, and replaces them with lightweight carbon fiber. However, the steel beams remain in the doors so that they retain their side-impact resistance.

A fixed front spoiler and a hidden rear spoiler that deploys at 60 mph and looks like the RS ducktail ensure the car’s high-speed stability. A Bilstein adjustable coil-over suspension and forged Fuchs alloy wheels wrapped in 225/45 (front) and 275/40 (rear) performance rubber make the Singer 911 adhere to the road. Brembo brakes enable the Singer to stop like a modern-day Porsche.

Additional modern touches include Hella headlights, a high-tech multiplex electrical system, and a lightweight air-conditioning system. Among the retro elements are Recaro seating and a MOMO three-spoke steering wheel.

However, the car’s most notable retro feature, its raison d’être, is its air-cooled engine, which is based on the 3.6-liter that powered the 993 series, the last of the air-cooled 911s. Singer bumped up the 911 Concept’s engine to 3.82 liters, which is enough to generate 410 hp. A 6-speed, close-ratio transaxle with limited slip transmits this force to the rear wheels and rockets the 2,400-pound Singer from zero to 60 mph in 3.9 seconds and on to a top speed of 175 mph.

The racing green paint job shown above is one of 24 color options for Dickinson’s 911. Another is, of course, black metallic.