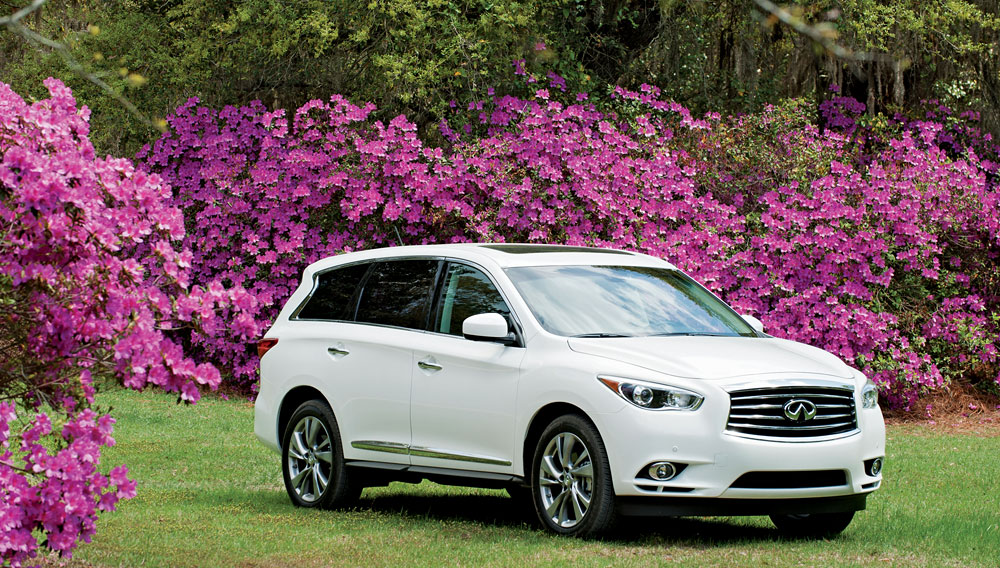 Infiniti recognized early on that tastes in domestic transport were evolving beyond the Chevy Suburbans and Dodge Caravans that once filled soccer-field parking lots on Saturday mornings. A decade ago, well before BMW began developing the X6, Infiniti brought a radical shift in style and performance to the family-vehicle market when it introduced the FX, a crossover built on the same platform as the Nissan 350Z sports car. Infiniti called the FX45 (the more powerful of the two FX models) a “bionic cheetah.”

In terms of performance, the all-new JX35 does not compare well with the latest, most potent FX model, the FX50, a five-seater with a 390 hp V-8. Equipped with a 265 hp, 3.5-liter V-6 engine and Infiniti’s first continuously variable transmission, the 4,550-pound JX35 takes nearly eight seconds to reach 60 mph from a standstill. But its streamlined silhouette lends the vehicle a sporty look—certainly sportier than that of the boxy, full-size, eight-person Infiniti QX. And though it is classified as a crossover, the JX35 is nearly as voluminous as the QX, capable of accommodating seven adults in its three rows of seating. The cargo area behind the third row includes plenty of space for groceries and soccer balls.

The JX35 has a starting price of less than $41,000. The cost jumps to just over $42,000 when the vehicle is equipped with Infiniti’s Intelligent All-Wheel Drive, which monitors wheelspin and automatically transfers as much as 50 percent of the engine’s power from the front wheels to the rear wheels when the roads are slippery. In normal driving conditions, all the power goes to the front wheels.

The second row of seating is innovatively designed to slide and tilt forward (even when holding a baby seat, Infiniti notes), allowing easy access to the third row. The seats are wrapped in leather that is as soft as your favorite Barcalounger’s. A three-zone (driver seat, front passenger seat, and rear seats) climate-control system is standard. Maple interior accents and a 15-speaker Bose sound system are among the options.

Infiniti is the first high-volume automaker to provide a free 24-hour concierge service. Owners have use of the Infiniti Personal Assistant feature for the duration of the JX35’s four-year warranty. It provides access to professionals who can help with nearly anything at anytime, from securing concert tickets to making restaurant recommendations and reservations.

The JX35 has an array of safety features, including a lane-departure warning system and intelligent cruise control. The most impressive safety feature is Infiniti’s new Backup Collision Intervention system. It automatically applies the brakes and stops the vehicle if it senses an oncoming object while the JX35 is backing out of a driveway or a parking space.

For the family, the JX35 is a good investment—safe, comfortable, and practical. It might be more of a house cat than a cheetah, but it does fine when roaming outdoors.