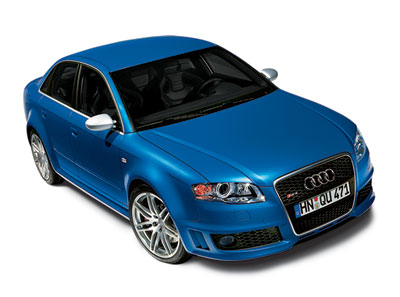 Another monster has come to life in the quiet German town of Ingolstadt, but unlike Mary Shelley’s creature, this one, Audi’s 2007 RS4, is ferocious by design. However, the RS4, which will have a base price of about $75,000 when it arrives next summer in North America, also was built from multiple sources: The body is a dead ringer for the Audi A4 sedan’s, the massive brake rotors were borrowed from the Lamborghini Gallardo, and beneath the aluminum hood is the 8-cylinder heart of a racecar.

Three-hundred-plus ft lbs of torque (311, to be exact) pump through a Torsen center differential that distributes 60 percent of the force to the rear wheels. All four wheels share active duty—it is, of course, a Quattro—so the instant you hit the pedal, you are off on a rampage.

Mayhem ensues at the push of the S button, which transforms the exhaust note from a low growl to thunder. A useful device for frightening bystanders, the S mode also quickens throttle response; you need only consider tipping the far-right aluminum pedal, and lightning will strike. With the car’s burbling exhaust and hair-trigger release, things easily could get out of hand if the RS4’s chassis were not so well composed. Compared to the A4’s, both the front and rear tracks are wider by more than an inch, and the ride height is 1.2 inches closer to the ground. The Dynamic Ride Control further enhances the traction and stability controls by using diagonally linked hydraulic dampers to exorcise the demons of body roll, dive, and squat. Test the limits of adhesion, and the car will hold out longer than your nerve will.

In the RS4, limits are more like guidelines. Turbo lag is conspicuously absent, until you remember that the engine is not turbocharged. The 4.2-liter, direct-injection, V-8 engine spins unfettered to a redline of 8,250 rpm, a velocity reached with startling ease through half of the six manually operated gears. Watch the needle from behind the flat-bottomed steering wheel—taken from Audi’s Le Mans prototype—and you gain a new appreciation for high-revving motors. In the RS4, 90 percent of maximum torque is on tap from 2,250 through 7,600 rpm.

The front fenders, hood, and suspension components are all composed of aluminum. Extra air inlets on the front end, flared front and rear fenders, and an integrated rear spoiler are subtleties that further distinguish the RS4 from its A4 donor.

Not so subtle is the RS4’s power: The car charges from zero to 62 mph in 4.8 seconds and then more than doubles that pace less than 12 ticks later. When the autobahn forms a straight line to the horizon, you hit the S button, and the engine’s 414 hp propels the RS4 to its governed top speed of 155—and then beyond, demonstrating again how difficult it can be to restrain a being born in Ingolstadt.