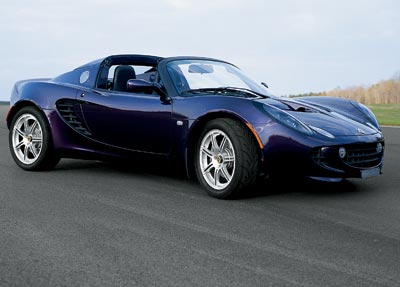 If judged solely on the modest block under its hood, the Lotus Elise that the British carmaker introduced to the European market in 1995 would never have gained its acclaim. The Rover engine delivered less than 120 hp, but the small and stylish Elise was built on a lightweight bonded aluminum chassis, which transformed the two-seater into one of the best-handling sports cars ever. Now, finally, an updated version of the Elise—more powerful and safer than the original—is available for $40,000 in the United States.

From the start, the pleas for this little car have been so numerous—in the United Kingdom, demand exceeded the company’s original projections by 300 percent—that Lotus initially could not even consider the American market. Once it did turn its attention to the West, Lotus recognized that the car would require significant alterations to meet American safety standards and American drivers’ expectations of reliability. Cynical enthusiasts harbored fears that an American Elise would be weighted down by federally mandated safety equipment, that its engine would be hobbled by emissions standards, and that its svelte shape would be enlarged to meet the perceived demands of U.S. drivers.

Such concerns can be set aside. The Elise has arrived in the United States completely intact—right down to the bare aluminum floors and exposed frame element—and improved in every respect. Indeed, the Elise is the best Lotus ever.

Lotus’ challenge was to certify the car and improve its performance without sacrificing its character. To do so, the company retained the aluminum structure and plastic bodywork, strengthened the chassis, and replaced the Rover engine with a more powerful 190 hp Toyota engine, which is mated to a close-ratio Toyota 6-speed transmission. The engine already met the emissions standards of all 50 states and had the backing of Toyota’s American parts and service organization. The variable cam timing and increased horsepower give the American Elise, despite its heavier build, a substantial advantage in power and performance over the European version. Air bags, improved bumper structures, and air-conditioning were also included.

With these additions, the Elise tips the scales at only 1,980 pounds—500 pounds lighter than a Mazda Miata and approximately 1,000 pounds lighter than a Porsche 911 Carrera. Its power-to-weight ratio places the roadster in the same performance category as the 911, the Maserati Coupe, and the BMW M3, and contributes to its zero-to-60 acceleration time of 4.8 seconds. The Elise’s surgically precise steering, combined with its low mass, small size, and sticky bespoke Yokohama tires, affords handling unmatched by any other regular production car.

Lotus enthusiasts might have endured a seemingly interminable interval waiting for the company to certify the Elise for America, but in this case, the improvements have made the car worth the wait.