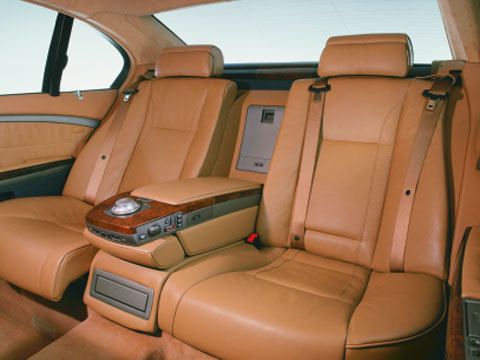 Of the 700 functions that BMW’s iDrive mechanism can control, only one is regularly employed by the average 7 Series owner; the remaining 99.6 percent of the system’s capabilities tend to be ignored. “The majority of customers utilize iDrive like you’d expect: for changing radio stations,” says Tom Purves, president of BMW North America. “They don’t use iDrive for much other than that.”

The statement is hardly surprising. Complaints abound that iDrive, which is designed to distill driving to its bare-bones essence by reducing dashboard clutter, instead muddies the experience with its baffling array of functions. Yet despite the negative feedback and Purves’ acknowledgment, BMW has responded with what could be interpreted as hubris, introducing a second iDrive in the new 760Li, the latest entry to the 7 Series lineup.

In addition to the center console-mounted knob-and-screen mechanism, the follow-up to last year’s 745i features a rear-facing iDrive. With it, backseat passengers, along with the driver, can control everything from cabin temperature to navigation. More significantly, because they do not have to concern themselves with such matters as steering and stopping, passengers may actually find the time to learn how to operate the iDrive.

What the backseat iDrive really does, however, is position the $115,000 760Li as a relatively low-cost limousine alternative to the Mercedes-Benz Maybach and new Rolls-Royce sedan. In fact, Purves refers to the 760Li as a luxury limousine. It bears a striking resemblance to the 745i; however, its wheelbase is 5.5 inches longer than the 745i’s. That translates to additional legroom for the chauffeured passenger, who can ride in a heated 14-way adjustable power seat, hidden from onlookers by electronic window sunshades as he conducts business on the car phone or watches a DVD on the iDrive’s screen. “He wants to control his own environment,” Purves says of the typical 7 Series owner, noting that the backseat iDrive enables him to do just that. “He can adjust the seat, cushion, A/C—he’s in charge.”

Still, he may prefer to exercise his authority from the driver’s seat, where he can switch to the Sport setting and transform the smooth-riding sedan into a twitchy performance vehicle suitable for the racetrack. The 760Li’s 438-hp, direct-injected V-12 engine delivers 444 ft lbs of torque, giving the 4,872-pound behemoth a zero-to-60 time of 5.4 seconds (the 745i’s 325-hp V-8 powers the previous-generation car from zero to 60 in 5.9 seconds). Such muscle, however, is governed by 18-inch brakes and the car’s Dynamic Drive system, which prevents side roll, giving the 760Li the perfect blend of smoothness and race-geared tightness.

And, of course, the 760Li driver has the signature iDrive system at his disposal, which at the very least will come in handy when he wants to change radio stations.