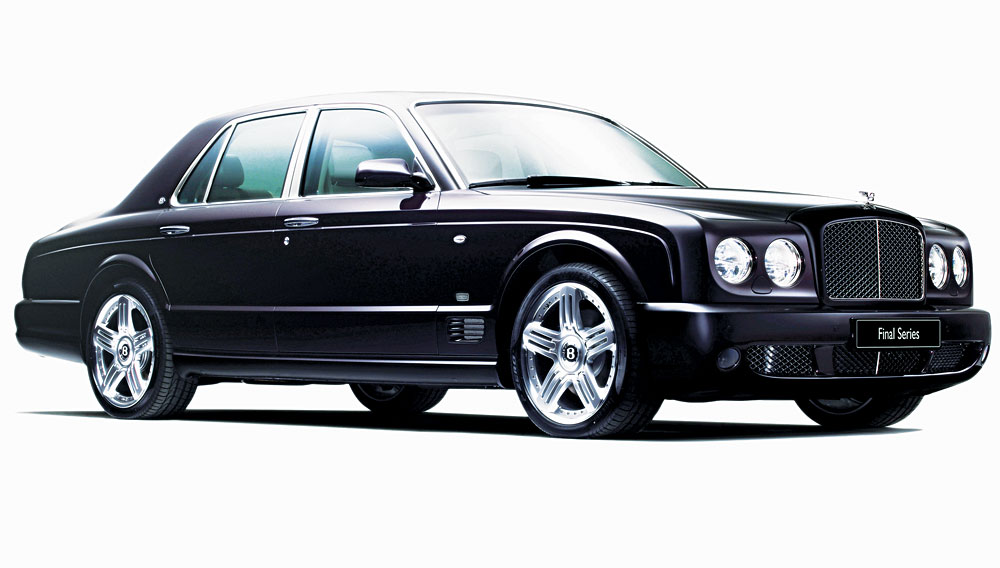 The last of anything—a picture show, a Mohican, or an out at Yankee Stadium—is inevitably a cue for remembrance. Now so is the 2010 Bentley Arnage Final Series, a three-ton luxury sedan with mirror-matched woods and leathers chosen by caressing hands. It is the last such luxury sedan from the company that created the luxury sedan.

Only 150 Final Series cars will be sold, each for about $300,000 depending on customer wants. The available indulgences include silk umbrellas mounted in the boot, a cocktail cabinet, seat-back picnic tables, and a Final Series brandy flask. And those are just the standard options; the bespoke choices are almost limitless.

Not a seam or a stitch is out of line. Fifteen hours of labor go into covering each steering wheel with leather. Seventeen cows give their hides to upholster an interior. With split-spoke wheels and Final Series badges festooning forward flanks and door sills, the car truly is going out with shield held high.

“This is the last compromise car, the last schizophrenic car, the last Bentley built by Rolls,” says Richard Charlesworth, Bentley’s director of royal and VIP relations. He is referring to the birth of the Arnage in the days when Rolls-Royce owned Bentley—prior to Volkswagen’s 1998 acquisition of the marque. “So it is a car that has seen us through good times and bad times and has outsold every other four-door that Bentley has produced.”

Charlesworth recalls driving the car around Arnage corner at the Le Mans circuit. He was the leader of a coup that broke Rolls-Royce’s stranglehold on the royal motor pool in 2002, when Bentley presented Queen Elizabeth with an Arnage-based state limousine as a Golden Jubilee gift.

The Final Series melds past and present to satisfy both the performance seeker and the heritage hunter that live within anyone who has ever driven a Bentley. The engine, a 6.75-liter twin-turbocharged V-8 that produces 500 hp, is thoroughly modern. It is also a direct variant of a motor that first appeared in the 1959 Bentley S2. The car’s electronics include an eight-speaker audio system and a six-disc CD changer (an iPod dock and a 10-speaker sound system by Naim are optional). An electric antenna from decades past rises from the rear deck like a skinny periscope.

Yet the importance of such details fades before the adventure of piloting this auto along narrow British country roads. Mechanically and dimensionally, the Final Series is almost identical to other Arnage models, which means it appears heavier and wider than some motor homes.

It tends to flop during turns, but nudging the steering and feeding in a touch of exit power brings everything back into balance for the straight ahead. Then the Arnage storms, showing thunderous acceleration and power that will surely live on in future Bentley models.

Employing huge horsepower that overcomes the weight of large luxury has always been the Bentley way. But the new-generation Bentleys—the lighter, smaller Continental GTs and Flying Spurs—do not have such square shoulders. Has the Arnage culture departed? The name will not reappear within any foreseeable generation, Charlesworth says, but the original recipe of oversize, overpowered, yet dignified tonnage will remain. “Those of us who know what is coming,” he says, “are not at all worried.”