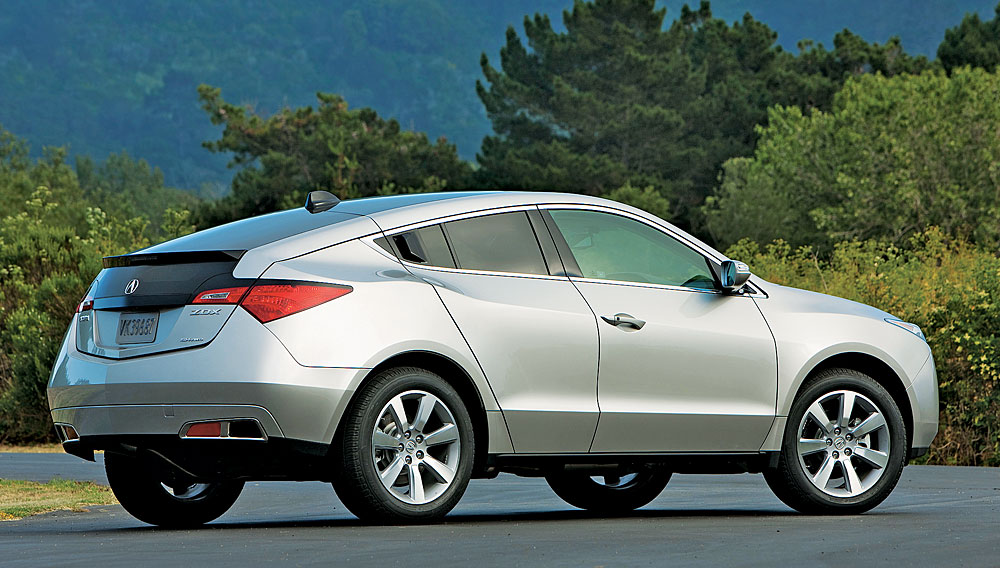 The Acura design studio in Southern California remains shrouded in mystery. Its doors were open for only a few short hours during an unveiling ceremony in May 2007, and the facility has been on lockdown ever since. “My family is not even allowed in to visit me at work,” says Damon Schell, Acura’s senior exterior designer. “But it certainly makes a strong statement that Acura really wants to do something different and amazing.”

The 2010 Acura ZDX is the first vehicle sculpted entirely behind the walls of Acura’s dedicated design facility, and the four-door, five-passenger hatchback with coupelike styling is indeed a head turner. According to Schell, the Acura design team was given “blue sky, carte blanche, a blank sheet of paper” when the styling process began a few years ago, and dozens of possible configurations were drawn up and thrown out before the ZDX emerged. “We always wanted it to be more of a coupe than anything else,” says Schell. “Sure it has four doors, but it features the styling, stance, and driving dynamics of a coupe, and it can handle anything that the road throws its way.”

Because Acura does not offer a coupe in its current line, much of the ZDX’s engineering derives from an unlikely source: the somewhat boxy Acura MDX SUV. The two vehicles are built on the same platform and use the same power train, which features a 300 hp 3.7-liter V-6 engine, Acura’s impressive Super-Handling All-Wheel Drive system, and a paddle-shifting 6-speed automatic transmission. In fact, the ZDX (starting at $45,495) is built not just in the same factory as the MDX but on the same assembly line. Yet despite these similarities, the Japanese automaker claims that the two vehicles are vastly different.

The ZDX’s styling is bold, blade-cut, and borderline beautiful, while the MDX’s shape suggests a more milquetoast, mainstream motor vehicle. Except for the fact that the two models share similar gussied-up grilles and chrome-coated brand badges, they bear little resemblance to one another. “They simply do not appeal to the same type of buyer,” says Schell. “With room for seven, the MDX is very family-oriented, and the ZDX is all about the people in the front seats.”

Where the MDX emphasizes utility, its sibling favors versatility. The ZDX’s lower ride height provides better handling than an SUV, while at the same time allowing passengers better visibility than most coupes and sedans. Additionally, the ZDX’s rear seats are large enough for three full-size adults and fold down with the flip of a handle to increase cargo space. “Absolutely nothing was compromised,” says Schell. “People either love it or hate it, but up until now, no one really paid much attention to Acura. Regardless of what people think, this is something pure and real, and represents the beginning of a new lineage.”