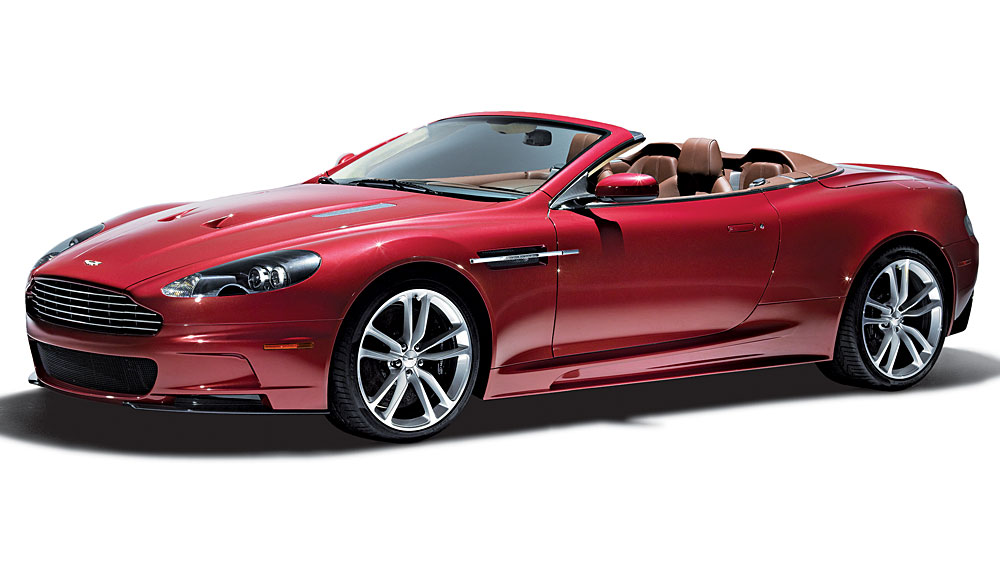 Pedigree automobiles are blessed with personalities that define their motoring character better than any badge, grille, or beautifully tailored silhouette can. Jaguars and Bentleys are haughty. Lamborghinis are lusty. Mercedes-Benz builds plodders. Ferraris combine ferocity with a finely developed feminine side. Aston Martins are about noisy power with elegant coarseness and mildly irritable handling that brings out the best and the beast in drivers who take a little adrenaline in their martinis.

The latter marque’s 2010 DBS Volante delivers the full persona. “The DBS is not a passive car, but one that makes a statement of being out there, of [living] life a little on the edge with a slight level of aggression,” says chief platform engineer David Doody. “The Volante has all of that—plus the fantastic experience of an open top.”

In fact, the retractable fabric top is the only difference between the DBS coupe and the DBS Volante convertible: Each has a 510 hp V-12, a six-speed transmission with both manual shifting and Touchtronic automatic paddle-shifting, and a swift passage from zero to 60 mph in 4.3 seconds with a top end of 191 mph. Plus, they share the styling symmetry, luxurious cabin materials, and handcraftsmanship that have been Aston Martin’s distinguishing traits since its open tourers of the 1930s.

Robb Report’s recent invitation from Aston Martin to play hard with the $283,500 DBS Volante was quite irresistible: The itinerary called for us to pick up the car in England and travel, via the Chunnel, to Rheims for a Champagne dinner at the caves of Louis Roederer and then head to the track at Le Mans. During our drive, the DBS Volante’s lid, which takes only 14 seconds to retract beneath a cool speedster tonneau, remained down. With the easy-up wind baffle in place, light conversations, heavy jazz emanating from the Bang & Olufsen sound system, and sterile instructions from “Janette” inside the GPS navigation system were clearly heard.

The DBS Volante’s 6-liter V-12 engine is an incredible, even lifesaving, hunk. It enabled us to glide past many vehicles on a rural two-lane road, tucking back in line nanoseconds before a head-on collision with an approaching police car. Mon dieu.

The car’s carbon-ceramic brakes could stop a tank. Its exhaust note snores deeper and is more raucous than those of many previous supercars. Cabin ergonomics are mostly intuitive, except for a manual-shift lever that rises too high and requires elbow-up gear changes. The seats offer appropriate amounts of coddle and grip, although legroom in the passenger-side footwell is minimal.

Sadly, as with many convertibles, the DBS Volante does not welcome luggage. The car’s trunk offered just enough space for a pair of duffel bags, which forced us to deposit our larger bags in a chase van.

Not that it matters. DBS Volante owners will find a way to fit their traveling essentials into a trunk barely big enough for a half-dozen baguettes. Because when one owns an Aston Martin convertible, staying home on sunny weekends simply is not an option.