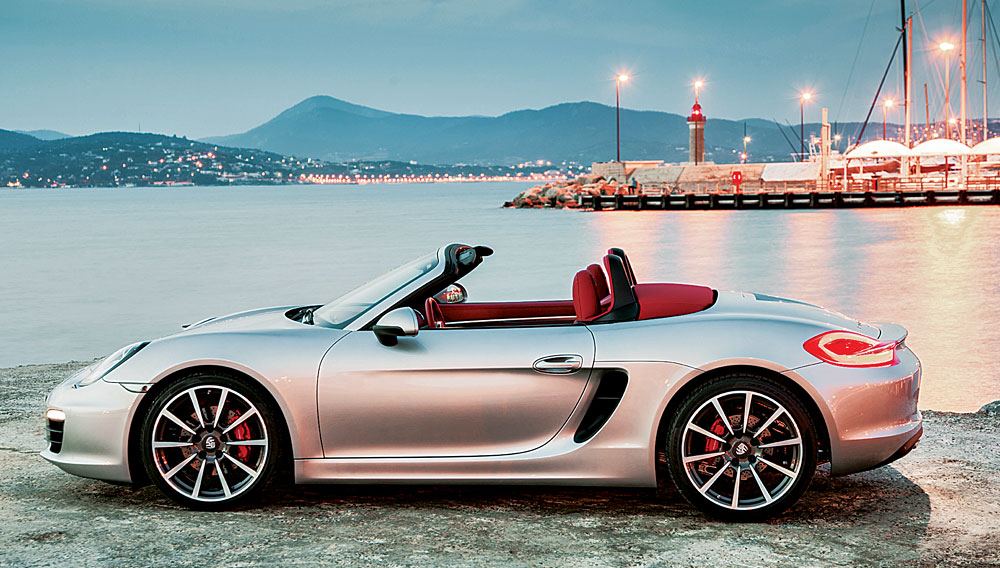 When the Boxster concept car hit the show circuit in 1993, the fresh design foreshadowed Porsche’s return to a no-frills sports car reminiscent of the marque’s 1950s-era 550 Spyder. The Boxster was the first true mid-engine Porsche since the unloved 914, and when production began in 1996, Porsche purists hailed it as the brand’s best-handling and most fun-loving ride.

The Boxster evolved with incremental upgrades in power and gradual refinement during its first 17 years, but the 2013 model, the third iteration (called the Type 981 internally at Porsche), includes sweeping improvements. Sensu­ous and sophisticated, with elegant creases and deep side scoops, it looks like a smaller version of the Carrera GT. The Boxster’s handling is otherworldly, thanks to the car’s ideal weight distribution, low center of gravity, and telepathic and tight steering and suspension.

While the car is no powerhouse, it is relatively light, at 2,888 pounds. Thus with a 2.7-liter flat-6 engine that generates 265 hp and 206 ft lbs of torque, the Boxster can reach 60 mph from zero in a respectable 5.5 seconds. The lightweight platform also rewards owners with fuel efficiency: Equipped with the 6-speed manual transmission (instead of the optional 7-speed automatic), the Boxster can achieve 30 mpg on the highway. The Boxster S—powered by a 3.4-liter flat-6 with 315 hp and 266 ft lbs of torque—should satisfy those with a need for more oomph.

Inside the cabin, driver and passenger will discover a spacious and refined environment. The new model incorporates lessons learned from the Panamera and new Carrera; its interior is positively opulent compared with that of any previous Boxster and is as luxurious as nearly any exclusive sports car’s. It includes the famously comfortable Recaro seats and superb overall ergonomics. After all, this is a driver’s car.

With a $49,000 base price, the standard Boxster is a colossal bargain, though it is doubtful that anyone has ever ordered a Porsche without at least one factory option. And it is easy to continue checking one box after another on the options list, the way one orders from a sushi menu. Our test car featured $26,000 worth of extras, including a gorgeous red-leather interior ($3,895) and 20-inch Carrera S wheels ($3,120) painted black ($1,425). It is not inconceivable to create a bespoke Boxster S, which has a base price of about $62,000, that lurches into six figures. The design, build quality, and performance attributes of such a car justify the price of what some might call Porsche’s take on perfection.