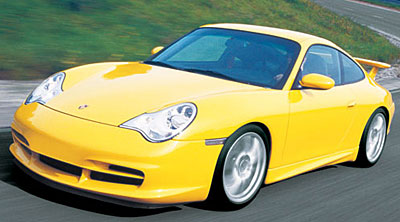 Push can quickly come to shove in the Porsche 911 GT3. With its minimalist bent—no traction control, no Porsche Stability Management system—an aggressive stomp on the accelerator, especially during a turn in first gear, could encourage the rear-wheel-drive GT3 to swing sideways and sweep the street with its 18-inch rear tires. Indeed, the 911 Turbo, which boasts a 35 hp advantage, feels downright docile next to the 380 hp, naturally aspirated GT3.

The raucousness of the $100,000 GT3, 750 of which are slated for North America, mandates that its driver possess a strong left leg, a pair of ready-to-tangle hands, and ears that can tolerate deafening growls. At its core, the GT3, an amalgam of Porsche competition machines from a variety of motorsport classes, is a racecar. Devoid of electronic driver’s aids and frivolous items such as a backseat and a navigation system, the GT3 has a playing weight of just 3,043 pounds, which ensures a driver the dominance he seeks. “It’s the kind of car that wants and needs to be driven,” says Hurley Haywood, chief instructor at the Porsche Driving Experience.

Haywood contends that the GT3, which scoots from zero to 60 in 4.3 seconds, may be at its best when pushed to triple-digit speeds on the racetrack, but that it can also be enjoyed on the street. A week piloting a Speed Yellow GT3, however, suggests that it would not be a logical first choice as a daily driver, especially compared to the refined Turbo. The GT3’s stiff chassis makes for a jostling ride, and the clutch qualifies as heavy metal. The car’s raw power discourages any notion of drive-with-one-hand, sip-coffee-with-the-other multitasking. Besides, no caffeine jolt can compare with the head-clearing din of the 3.6-liter engine, which bellows when the needle approaches the 8,200 rpm redline.

At high speeds, however, this car excels. In sixth gear on the highway, the GT3, which peaks at 190 mph, still pulls like a tugboat, bending necks with a press of the gas. But to wring the optimal performance and pleasure out of the GT3, its driver must wield skills equal to the vehicle’s performance level. Given the car’s capabilities, it seems a pity that most of its drivers will lack the knowledge and experience needed to push the GT3 to its limits. Professional track and classroom instruction should be a prerequisite for a GT3 purchase because, as Haywood notes, only the driver could stand for improvement. “There’s nothing you can do to the GT3 to make it better,” he says. “There may be one little thing to make it faster or one chip you can put in. But the overall benefit would be negative, because you would improve only one small dimension of the car. It’s really a perfect car, and there are not too many cars you can call perfect.”