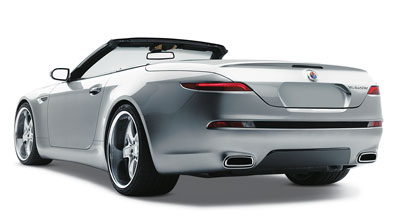 At one time, a luxury automobile was distinguished more by the rarity of its appearance than its price. In the early part of the last century, owners of such cars often would purchase a chassis and engine from Cadillac, Rolls-Royce, or another trusted automotive engineering firm, then hire an independent coachbuilder—what in Italy is known as a carrozzeria—to customize the body. Coachbuilders had carte blanche to create fantastic designs, and as a result, one-of-a-kind vehicles now populate the 18th fairway at Pebble Beach every August. Today, however, scarcity is not necessarily a characteristic common to luxury cars. “My local Bentley dealer sold 240 Continental GTs, and that’s just in Newport Beach,” says Henrik Fisker, president of Fisker Coachbuild, an upstart design firm–cum–manufacturer. “We will limit our output to 300 cars worldwide.”

Fisker Coachbuild will construct the Latigo CS on the chassis of the 650Ci coupe from BMW, the carmaker for which Henrik Fisker designed the Z8. Fisker’s business partner, Bernhard Koehler, served as the director of operations at BMW’s DesignworksUSA.

Fisker Coachbuild is evoking the golden age of the carrozzeria with its plans to embellish two modern cars in limited annual runs of 150 each. A two-door coupe, the Latigo CS, and a two-seat convertible, the Tramonto—based on the BMW 6 Series and the Mercedes-Benz SL, respectively—constitute the inaugural product line. “We chose the SL and the 6 Series because they are two of the best-engineered cars in the world,” explains Fisker.

The Mercedes-Benz SL, the canvas on which Fisker creates the Tramonto, is the hardtop convertible that earned Robb Report’s Car of the Year honors in 2002. (The supercharged AMG version garnered that designation in 2003.) After you order the car from your local Mercedes-Benz dealership, Fisker takes delivery, removes the standard body panels and interior, and starts from scratch.

In addition to most of the exterior parts, Fisker’s crew will remove the three-pointed star and blue-and-white propeller badges from the Mercedes-Benzes and BMWs and replace them with his company’s logo, an orange-and-blue emblem that represents the California sunset over the Pacific Ocean. (Tramonto means “sunset” in Italian.) Bisecting the colors are two parallel lines that, says Fisker, represent a designer’s pen and a modeler’s tool. The pen is a reference to Fisker and his role in the business, and the other line, the modeler’s tool, alludes to his business partner and chief operating officer, Bernhard Koehler. The two worked together first at BMW, where Fisker designed the Z8 and Koehler served as director of operations at BMW’s DesignworksUSA, and then at Ford, where they created the Aston Martin DB9 and the V8 Vantage.

Their current collaboration, the Mercedes-based Tramonto, can include an optional Performance Plus package ($43,000) that, with a power boost from Danish tuner Kleeman, increases output from 493 hp to 610 hp and torque to 650 ft lbs. The Tramonto’s top speed is 202 mph, and it blasts from zero to 60 mph in 3.6 seconds with an exhaust noise, says Fisker, “like a NASCAR.” Fisker Coachbuild’s extensive carbon-fiber exterior remodeling and its leather interior raise the Tramonto overall price to $297,000.

The Fisker Latigo CS offers Bimmer enthusiasts a glimpse of what their cars might look like if Henrik Fisker, instead of Chris Bangle, were in charge of BMW’s design department. Scheduled to go into production in mid-2006, the Latigo, a heavily modified BMW 650Ci, will produce as much as 550 hp and cost $197,000.

Fisker explains the premium price by noting that he uses only the best materials when building his cars, for although the eyes may not always be capable of detecting the difference between real aluminum and aluminum-painted plastic, the fingers can. The doors are aluminum, as are the Fisker-designed three-piece 20-inch wheels. All of the car’s chrome bits are made from milled aluminum, instead of the chrome-coated plastic from which most of the corresponding original equipment is made.

Its price therefore will distinguish a Fisker Coachbuild car, but not as much as will its rarity.