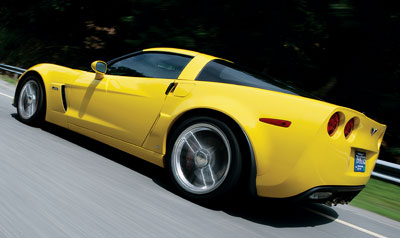 It is easy to overlook the subtle design elements that distinguish the Corvette Z06 from other new ’Vettes. But as minor as they may appear to be—functional air inlets, wider fenders, discreetly enlarged rear spoiler, and larger brakes, wheels, and tires—these appurtenances and alterations serve serious purposes for the new Corvette, the first that merits full membership in the supercar club.

Within the first few miles of a drive, the Z06 demonstrates its swathed-in-civility athleticism. However, to appreciate fully the car’s shattering acceleration and exceptional handling and braking—and to hear the big Chevrolet engine’s primal exhaust note, as distinctive as a Harley-Davidson’s, sounding almost vicious as it reaches its 7,000 rpm redline—requires much more than a short run through the city, entertaining though that ride may be. For even more amusement, invite the owner of a Ferrari F430 to take the thick-rimmed steering wheel of the Z06 on a jaunt beyond the city limits. An acolyte of the Shrine of Maranello may scoff momentarily, but only until he finds a road where he can let the Corvette loose. Assuming he has not forgotten how to operate a manual gearbox, the F430 pilot can take the Z06 from rest to 60 mph in 3.7 seconds, pass the quarter-mile mark eight seconds later at 125 mph, and watch the speedometer needle rise steadily to a maximum speed of 198 mph. At each of these benchmarks—though certainly not in the overall driving experience—the Z06 proves superior to the F430.

This may sound like an old story; over the past five decades, plenty of Corvettes have outpaced European sports cars in a straight line. However, the Z06 carries the battle on the back roads—and on the racetrack. Pull on a helmet, slip into the deeply bolstered seat, and meet the other, more aggressive side of the Z06’s personality. The acceleration would impress even Colonel Stapp, he of rocket-sled fame, and when you enter a corner at what feels like maximum speed, the Z06’s superb chassis enables you to sail through. Press harder on the accelerator, and you begin dancing with a partner that is as willing and as nimble as the best of its rivals. Although the tires may be fighting for traction, you can maintain the desired trajectory at a pace that heretofore seemed impossible. The Z06 rewards either finesse or brute force inputs with the appropriate reactions, and it gives the impression, at least to a driver lacking an FIA license, that it possesses limitless poise. Develop more skill, and the Z06 always will be a step ahead of you. Therein lies the Z06’s true appeal: An expert can maneuver it in apparent defiance of the laws of gravity, while less skilled drivers can feel as though they are performing valiant deeds in comfort and safety.

The fastest Corvette yet has a chassis made of aluminum instead of steel and achieves 505 hp from its 7-liter (427-cubic-inch, to Corvette devotees), all-alloy, handbuilt engine. If the price gives you pause, consider that the Z06 does trump several European exotics in performance and rivals them for sophistication, which should help soothe any pangs associated with paying only $70,000 for a supercar.