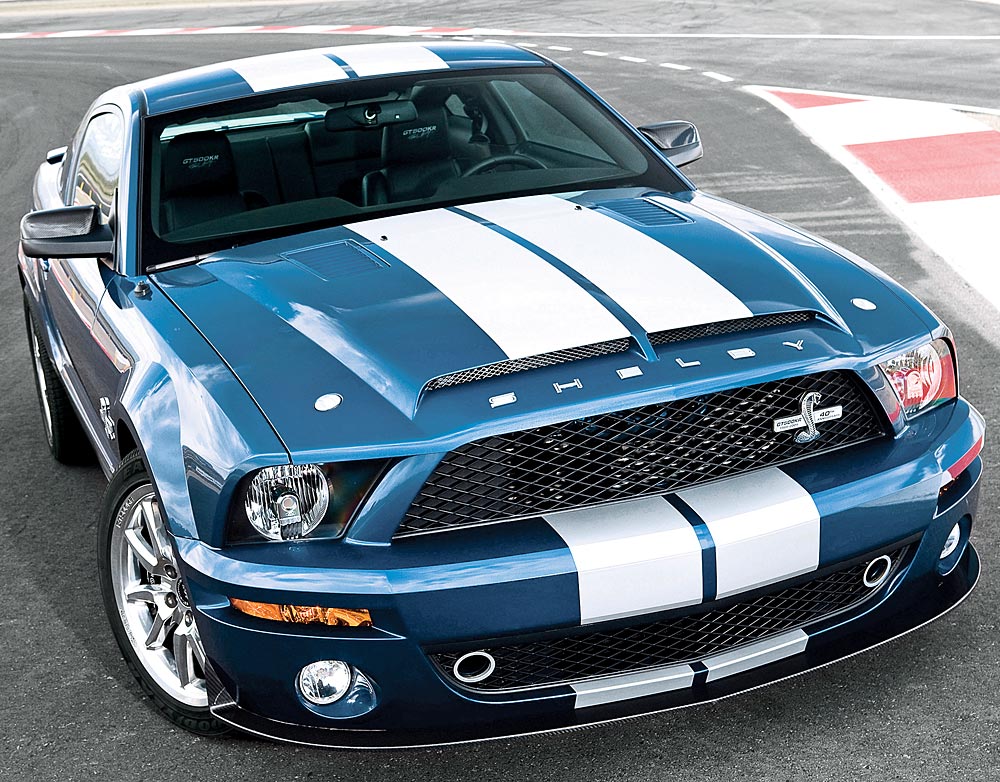 Forty years ago, former racecar driver Carroll Shelby caught wind that General Motors was just weeks away from unveiling a King of the Road edition of the Chevrolet Corvette. “The brochures were already printed,” recalls Shelby, whose Cobra competed with the Corvette both on the track and in dealer showrooms. “I immediately called my attorney in Washington and asked him if GM had copyrighted the name. He told me they hadn’t, so I did—and I ordered a couple hundred KR decals the very next day.”

What began as a lark soon became a legend. Shelby took a 1968 Shelby Cobra GT500 Mustang and added a few upgrades—including a custom fiberglass hood over a 335 hp Cobra Jet V-8 engine—and dubbed the car the “King of the Road.” Thus equipped, the original KR edition, of which Shelby built only 1,571, reached 60 mph in just six seconds.

These days, even the base-model V-8 Mustang speeds to 60 mph in 5.8 seconds. Shelby, therefore, had to reach again into his bag of tricks to make his 40th-anniversary-edition King of the Road—the first KR model produced since 1968—live up to its royal designation.

Shelby resorted to a supercharger to prod his nearly two-ton (3,879 lbs) GT500KR to 60 mph in 4.3 seconds. Twin scoops in the familiarly shaped carbon-fiber hood optimize airflow to the 5.4-liter V-8’s intercooler, while freer-flowing stainless-steel exhaust pipes let that air out in style—delivering a raucous noise just one decibel shy of federally mandated limits. The 540 hp car’s oscillating idle “sounds like an offshore powerboat,” says Jamal Hameedi, the Ford Special Vehicle Team’s chief program engineer. “Then you hit the throttle, and it’s more like a monster.”

Noise is not the only vestige of the muscle-car era. The KR rides on an old-fashioned solid rear axle, something most modern autos have forsaken for fully independent suspensions. “American roads are pretty smooth,” explains Shelby, who argues that independent rear suspensions aid handling only on tight road courses.

A tight road course—the 2.2-mile west circuit at Miller Motorsports Park in Tooele, Utah—is precisely where I drove the KR. The track’s fresh pavement may have contributed to the car’s handling, which was superior to that of the base GT500. The advantages of the KR include firmer springs and high-performance tires that help hold the corners, as well as a carbon-fiber air splitter and a less prominent rear spoiler that add downforce for high-speed stability. In addition, the KR’s 6-speed manual transmission executes short, precise shifts, unlike the heavy clutch and clunky gearbox of the standard GT500.

Ultimately, how well the KR handles will have little to do with how well it sells, as I was reminded by the numbered aluminum plaque, set just above the shifter, that bears Shelby’s engraved autograph. Ford planned to send just 1,000 Mustangs to Shelby’s Las Vegas facility for KR upgrades, but demand forced the company to loosen the reins to 1,800 units. Of those, 1,571—in deference to the original number—are being sold in the United States in 2008 and 2009 (only the 1,000 released in 2008 are considered 40th-anniversary models). “There are about 4,000 Ford dealers, and they all squeal like a pig under a gate if they don’t get a car,” says Shelby. A lottery system determines which dealerships will receive a KR. Regardless, buyers should expect to pay more than the $80,000 base price. “A new KR might sell for $150,000 on eBay, which seems like a lot of money for a Mustang,” Shelby laments. “My ambition was always to make performance affordable.”