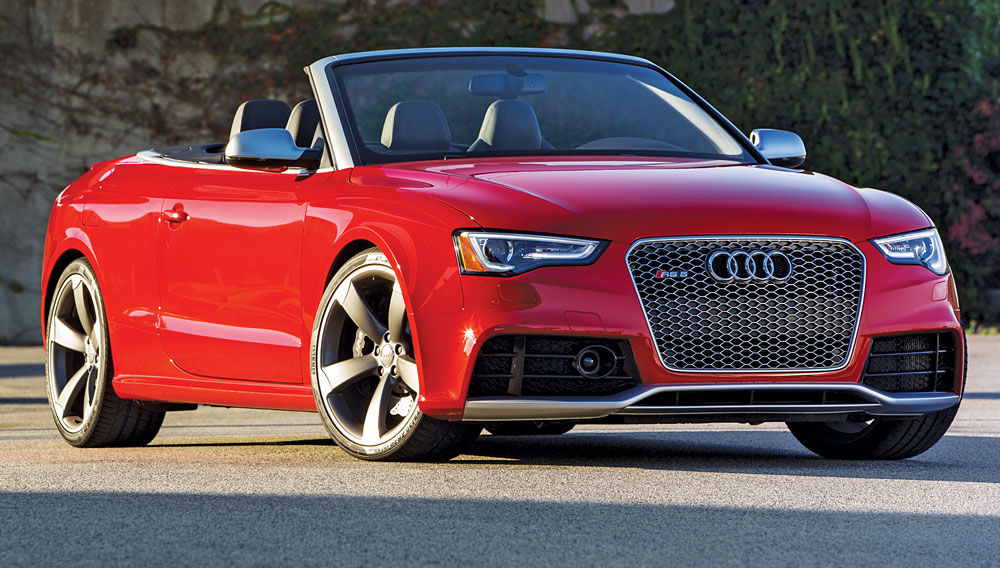 Since its arrival in the United States six years ago, the Audi 5 series—the standard (A5) and sport (S5) coupes and convertibles—has presented some of the most subtle and elegant shapes on the road. It is a popular choice among technically inclined, design-conscious drivers who value understatement almost as much as they value performance—people who like to walk softly while carrying a big stick. Not too big and not too small, the A5 and S5 were conceived with the driver top of mind. The cars fit like gloves and feel as much at home on twisting canyon roads as they do on the interstate.

The RS 5’s mesh grille, flared fenders, and oval exhaust tips are the design elements that subtly distinguish it from the A5 and S5. The Misano-red-pearl Cabriolet that Audi provided for a test-drive had optional 20-inch, five-spoke aluminum wheels, plus other trim and navigation upgrades that raised its price to just under $90,000.

The interior offers few thrills—a notable exception being the available 505-watt Bang & Olufsen sound system—but no design faux pas. The test car’s black-leather-lined interior included some aluminum and carbon-fiber inlays. It was not sumptuous but still well appointed. The 12-way power sport seats, which are also available on the S models, can be a welcome feature on long road trips. They certainly were on the test-drive, which took place in August and covered the route from Los Angeles to central California’s Monterey Peninsula and back after a visit to the annual classic-car fest at and around Pebble Beach. With the black-fabric roof down (it lowers in 15 seconds and closes in 17) during the drive home along Highway 1, wind buffeting was minimal. With the top up and the car at speed, the cabin was dead quiet.

The engine—which is mated to Audi’s superb S tronic 7-speed dual-clutch transmission and delivers power through Audi’s Quattro all-wheel drive—provides the RS 5 with plenty of speed. The car accelerates from zero to 60 mph in 4.9 seconds on its way to 174 mph. The V-8 revs like a banshee, and in sport mode the RS 5 sheds its diplomatic personality and demonstrates an alpha aggression that is more befitting of a single-purpose automobile. The prototypical Audi drivers will appreciate the RS 5’s performance capabilities, even if they only occasionally indulge in them.