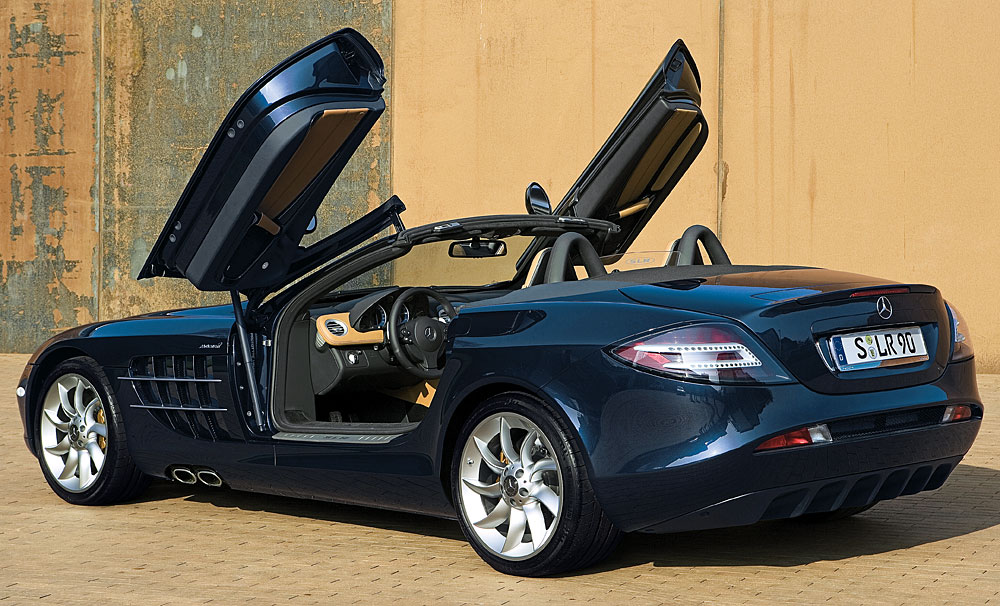 It has been more than 10 years since the first time I jumped out of an airplane, but I still recall every detail of the 60-second free fall that preceded my pulling the rip cord. So with some degree of authority, I can compare skydiving with driving the new topless version of Mercedes-Benz’s SLR McLaren near its maximum speed of 206 mph: The latter is nearly as exhilarating as the former, because the supercar hurtles down the highway at roughly twice the speed with which gravity sucks you toward the earth during that first minute after you leap from the airplane.

The $500,000 SLR McLaren Roadster, the latest fruit from the collaboration between Mercedes-Benz and its Formula One racing partner, McLaren, is comfortable enough to use as a daily driver yet also capable of astonishing speeds.

Mercedes formed the Roadster’s body shell and chassis from the same carbon fiber–reinforced plastic used in the coupe. However, the company made a few of the convertible’s key components stronger than those of its sibling to ensure a structure as solid as the hardtop’s. Mercedes also gave the Roadster a new windshield frame, swing-wing doors that are attached to steel-reinforced A-pillars, and a revised trunk lid and rear fenders. Although it is nearly 125 pounds heavier than the coupe, the 4,023-pound Roadster still will sprint from zero to 60 mph just as swiftly—in 3.8 seconds.

Part of Formula One racing’s charm is that the world’s most technologically advanced racecars compete even in the rain. Pit crews replace the racing slicks with treaded tires, the fans don ponchos, and the sport becomes more of a spectacle as Mother Nature involves herself in the drama. However, driving an F/1-inspired convertible through spitting drizzle is far less dramatic than you might expect. When the SLR is moving at moderate road speeds with its top down—the canvas cover can be raised or lowered in less than 10 seconds—the car’s aerodynamic design actually prevents raindrops from penetrating the cabin space; on highway or autobahn, the slipstream creates an invisible shield from the elements. Such was the case one soggy day last fall in Germany.

The opportunity to test the SLR’s top speed arrived like a sudden planetary alignment. The clouds parted, the drizzle stopped, the road dried, the autobahn straightened, and the middle lane emptied. When I pressed my right foot toward the floor, the supercharged, AMG-built V-8 engine responded with a burst of 617 hp and 575 ft lbs of torque, launching the car beyond its former 100 mph cruising speed with the force of an afterburner. My passenger, a television journalist from MotorWeek, later reported that every muscle in his body tensed and then relaxed before he sank into his seat, peering over the side windowsill at the blurry streaks of color that were the cars in the far-right lane. The last time he peeked over at the speedometer, it read 320 kph, or about 198 mph.

I did not glance down at the instrument panel, because 206 mph equals more than the length of a football field per second, which is a lot of ground to cover blindly. Instead, I busily scanned the horizon, attempting to estimate the braking force necessary to maintain a safe distance from the BMW M5 that was blocking the left lane like a brick wall, though it was traveling at about 150 mph. I am happy to report that the Roadster’s carbon-ceramic brakes—in concert with a trick air brake that rises to create extra downforce over the rear axle—work as well as a parachute.