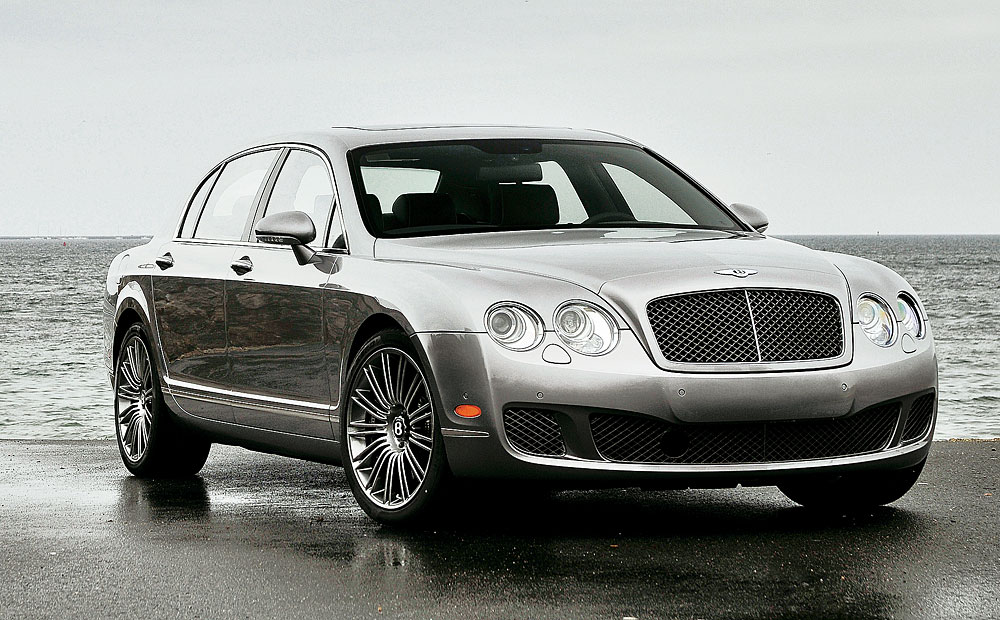 Etched into the doorsill plates in the latest version of Bentley’s Continental Flying Spur are the letters S-P-E-E-D.This polished aluminum inscription recalls the Speed Six, Bentley’s winning Le Mans entry in 1929. In that memorable race, Bentley drivers finished in first, second, third, and fourth places. The company is now reusing the historic nameplate on its highest-performance iterations of the Continental Flying Spur sedan and Continental GT coupe, evoking a heritage as rich as the cars’ hand-stitched, diamond-patterned, quilted-leather seats and door panels.

Aside from its historical significance, the word speed also promises high performance, which I experienced recently while piloting the Flying Spur Speed on the back roads of rural Massachusetts. Throwing caution to the breeze, I paddle-shifted the 6-speed transmission into low gear, stepped on the accelerator, and let the 602 hp engine propel me down Route 91. The 6-liter, twin-turbo W-12 engine growled as I sped through the New England countryside. The 5,379-pound vehicle achieved 100 mph in a matter of seconds, but its optional carbon-ceramic brakes provided an effective way to rein in this momentum.

“We all love the sound of the W-12 range,” says Ulrich Eichhorn, Bentley’s director of engineering. “[On the Flying Spur Speed] we’ve retained that character, but reduced it by about 40 decibels.” An inner layer of acoustic laminate on the side and rear windows and new tri-laminate acoustic underbody trays and wheel-arch liners absorb more road noise than the sound-proofing materials on the standard Flying Spur—but the driver still retains some sense of connection to the pavement and to the 12 cylinders under the hood.

In the Flying Spur sedan and GT coupe Speed versions, Bentley increased power (up 50 hp) and torque (up 15 percent, to 553 ft lbs) by refining the engine-management system with a new crankcase and lower-friction, lighter-weight components. “The main ingredient is obviously the upgraded engine,” Eichhorn says, “but we’ve also improved fuel economy.”

With all due respect to Eichhorn, fuel economy is obviously not this car’s top priority. The Flying Spur Speed sprints from zero to 60 mph in 4.5 seconds. It can achieve a 200 mph maximum velocity, given a long enough stretch of freeway (which—take my word for it—cannot be found in rural New England). And it has the same engine performance and 20-inch Pirelli tires as its sibling, the Continental GT coupe. However, the Flying Spur Speed’s throttle response—compared to that of the coupe—comes up short. In fact, the car’s one weakness is turbo lag—the slight delay between stepping on the gas pedal and actually accelerating. When the twin turbochargers do kick in, though, they deliver on the Speed’s central promise.

Otherwise, it is difficult to find fault when sitting in such a spacious and opulent cabin, adorned as it is with drilled metal pedals, sumptuous leather, and those etched aluminum letters referencing winners, past and present.