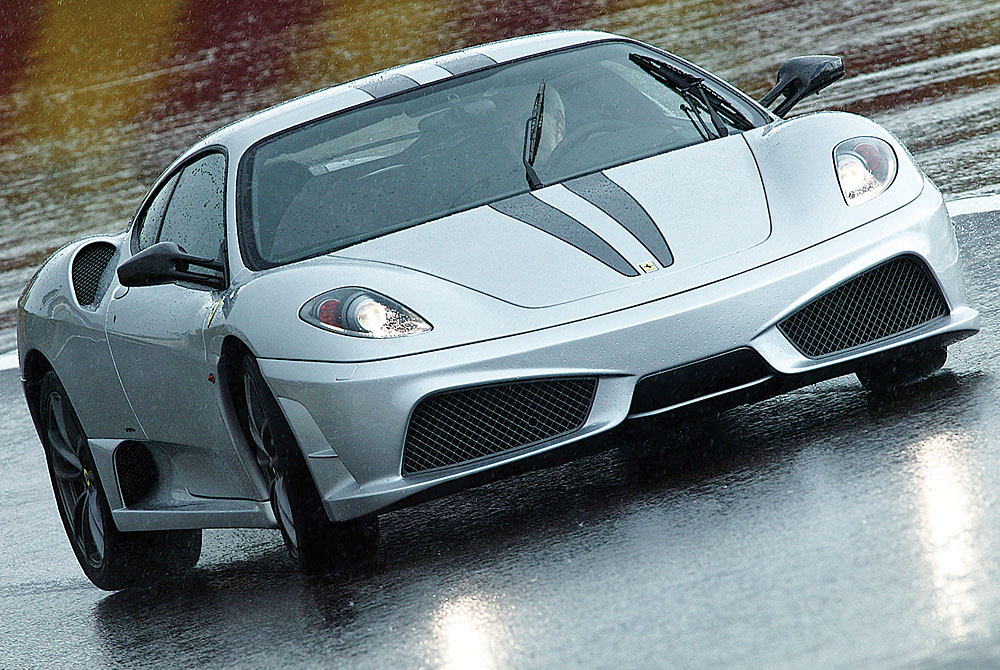 Ferrari’s racetrack-ready F430 Scuderia is all raw welds and unpainted aluminum. Naked carbon fiber stretches from the center tunnel to the doorsills; the floors are bare metal; and frills are fewer than a farm truck’s. This is a vehicle for those who work seriously at motoring more quickly and smoothly.

To serve such wants, Ferrari took the already fantastically fast stock F430, reduced its weight, increased its horsepower and torque, smoothed the aerodynamics, and added enough technology to render most driving skills redundant. Such flawless electronic sorcery previously was available only to F/1 teams. The Scuderia—a two-seat, rear-engine, V-8 Berlinetta—is F/1 good. It is so advanced, in fact, that during its introduction late last fall in Maranello, Italy, Ferrari executives felt obliged to note that the Scuderia (Italian for “stable”) is an addition to the F430 line and not a replacement for any existing model.

The F430 coupe and Spider, both suitable for daily driving during the week and racing on weekends at Willow Springs, remain Ferrari’s acclaimed road cars. The F430 Challenge continues as the street-illegal sports car of choice for those who compete in Ferrari’s own amateur racing series. Between the former two 430s and the latter one falls the Scuderia. It is mostly a racecar and definitely a thrill-giver, but it is not so edgy that it is bereft of usefulness and civility on public roads.

The Scuderia is more than 200 pounds lighter than the standard F430. Horsepower has increased to 510 from 483, top speed is improved to an honest 200 mph from a piddling 196 mph, and the zero-to-60-mph time is now 3.6 seconds, compared to 4 seconds for the earlier car.

The Scuderia also is equipped with technology nearly sophisticated enough to have NASA pointing to Ferrari for comparisons. Together, those components—all of which world driving champion Michael Schumacher tested and approved—constitute a high-performance package. It includes an electronic differential for near-instantaneous power management, a self-adapting traction and stability system first seen in the 599 GTB Fiorano, and an improved transmission process that has chiseled gearshifting down to 60 milliseconds from an almost sleepy 150.

Ferrari is expected to send 300 Scuderias to the United States, and deliveries could begin this spring. The car’s price is $262,000.

Following the Scuderia’s unveiling, rain, ranging from a mist to buckets of the stuff, cramped most of our driving at the Fiorano circuit and through the mountains and villages north of Maranello, in the province of Modena. Here, policemen do not see, and villagers do not mind, the speeding, because this is Ferrari country, and bellowing, streaking sports cars come with the territory.

Between rain showers, the Scuderia went about its business of stirring excitement without fear during a few hot laps at Fiorano and on damp stretches of rural roads. What a difference those milliseconds made as we paddle-shifted—with a flick-whap, flick-whap progression—through the 6-speed box. Any drop in engine revs was imperceptible.

Traction control thresholds were almost as high as human limits. Corrections were immediate, positive, and complete. With the wheel-mounted manettino switch (controlling all suspension, differential, and shift settings) on “race” mode, the Scuderia brought a new and satisfying F/1 dimension to our driving—plus a sense of precision and security that seemed to preclude the possibility of our spinning sideways.

At the end of the Tuscan day, the Scuderia emerges not only as the best-handling, finest-balanced Ferrari in the company’s 60-year history, but perhaps also as the world’s superlative sports car.