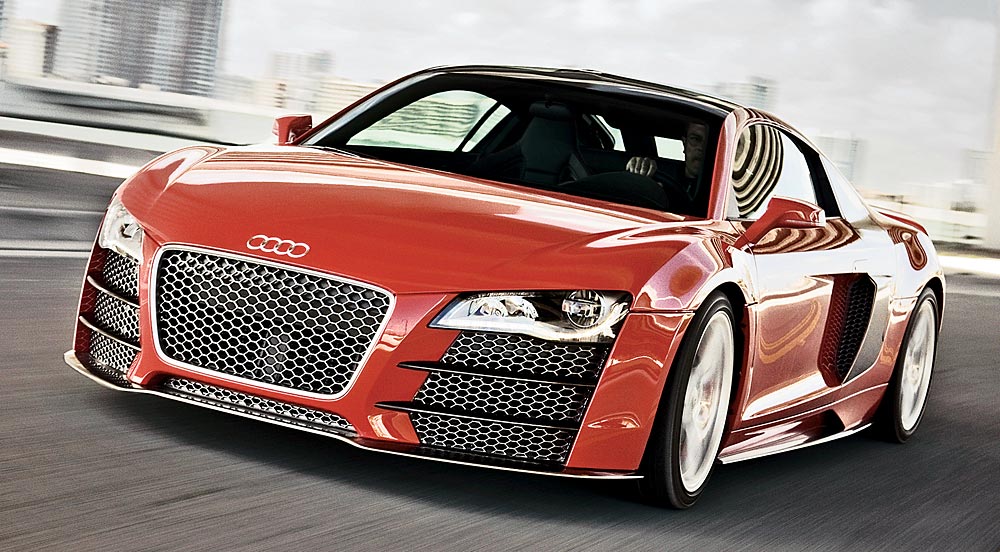 In recent years, no marque has won more Le Mans–series endurance races than Audi. The company also has successfully translated those weekend wins into sales with a production version of its Le Mans racecar. The R8 made the press swoon—it is Robb Report’s current Car of the Year and has received numerous other accolades—and demand quickly outpaced supply.

Hoping to re-create this success, the Audi Sport Team last year introduced the diesel-powered R10 TDI prototype car, which used a 12-cylinder, turbocharged, direct-?injection engine to dominate Le Mans. At the Detroit Auto Show in January, the R8 V12 TDI Le Mans concept car made its debut, hinting that Le Mans is Audi’s official showcase for consumer technology, if not its proving ground.

German engineers rarely rest on their laurels, however, so if my recent test drive is any indicator of future product plans, the R8 will soon bequeath its halo to a faster, more environmentally friendly diesel-powered scion.

The red paint job belies the green car’s arsenal of exhaust-gas filters and catalysts, which help the engine meet stringent European emissions standards set to take effect in 2014. Better yet, Audi estimates the car will get up to 25 mpg. And unlike most concepts, the Le Mans can handle more than a turntable, as I discovered on the roads surrounding Sebring, Fla.

“It’s the only one of its kind in the world,” an Audi official pointed out, as if to justify the prototype’s relatively short leash. I was honor-bound not to exceed a 50-mph top speed during the car’s maiden test-drive down an airfield runway. The ride was enjoyable, but I experienced only a fraction of the diesel-powered R8’s performance potential.

Audi claims that the car will reach 60 mph in 4.2 seconds and press onward past 186 mph. A twin-turbo, 6-liter, diesel V-12 puts 500 hp and 738 ft lbs of torque to all four wheels. Flanked by carbon-fiber-composite ducts that guide fresh air through a roof-mounted inlet, the engine looms large under glass behind the cockpit, supplanting the standard car’s gas-powered V-8. To shoehorn the extra four cylinders into the engine bay, Audi co-opted space from the passenger compartment; where the standard R8 has cargo room behind its seats, the concept has none.

What the interior lacks in accommodation it makes up for in adornments, such as billet aluminum trim and switch gear, shimmering carbon fiber, and laser-perforated leather. The overall effect is one of meticulous craftsmanship. Sound deadening, however, is minimal. Windows are polycarbonate instead of glass, so a mechanical din makes it impossible to forget what is going on behind your head: 48 valves clacking, variable-geometry turbochargers spinning, and intercoolers hissing. There is some mild clatter as engine revs build, but the exhaust note is sonorous—eerily reminiscent of the 5.5-liter V-12 that powers the R10 racer. All that’s missing is a window sticker.