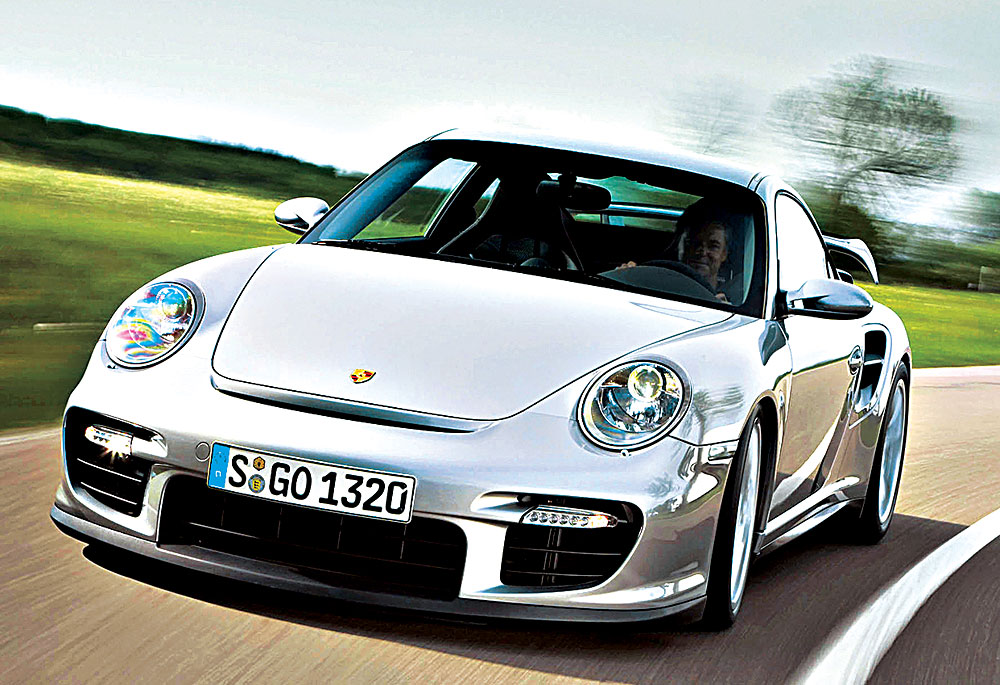 Blasting through puddles at 187 mph on the main runway at Alhorn flugplatz in northern Germany, Porsche’s 2008 911 GT2 spits out a rooster tail taller than Miss Budweiser’s. It is a spectacular display—and a relatively safe one. Changing direction at this speed in these wet conditions is not as risky as it might appear, in part because the GT2 is equipped with an active suspension system and Pirelli P-Zero tires. Squeeze more air from the car’s two turbochargers, and the GT2 responds with more speed, not wheel spin. Press the vehicle’s huge carbon ceramic brakes, and the car neither swerves nor hydroplanes.

“Now let’s try that with no controls on,” says Walter Röhrl, senior test driver for Porsche, world rally champion, master of the Nordschleife, and onetime chauffeur to the bishop of Regensburg. In this mode, the car slides some, but if you are alert and have good reflexes, you can control it. “Different, yes,” concludes Röhrl. “Dangerous, no.”

This GT2, the third generation of the car, is lighter than the 911 Turbo from which it derives, mostly because its exhaust pipes are made of titanium. It has rear-wheel drive instead of all-wheel drive, which gives it a zero-to-60-mph time that is slightly slower than the Turbo’s—3.6 seconds versus 3.4. However, its acceleration still will knock your sunglasses sideways.

The GT2 has a top speed of 204 mph, which makes it the first factory-built Porsche since the Carrera GT to exceed the double-century barrier, and with a horizontally opposed boxer six that produces 530 hp, it is among the company’s most powerful road cars ever.

The GT2’s 6-speed manual transmission could appear quaint if the shifting were not so short, swift, and sweet. Despite its biplane rear spoiler, launch assist, 505 ft lbs of torque—which the car achieves from 2,200 rpm to 4,500 rpm—and big-gulp air ducts, the Porsche rolls smoothly and gracefully.

Porsche, which has priced the GT2 at about $192,000 and will begin deliveries in February, has shorn the car of many luxuries while prepping it for the track; downforce is abundant, but a Bang & Olufsen sound system is absent. Indeed, you could race this car at Le Mans after perhaps adding just the optional, factory-installed Club Sport Package (not available in North America), which includes a roll cage, fire bottle, and six-point seat belts.

“We’re living in a period where more people can afford this type of car,” says Alan Lewin, project manager for the GT2. “Yet with the increased presence of speed traps, there are few places to use them.” Such venues are limited to racetracks—on days when they are available to amateur drivers—and motor sports country clubs, which are growing in number. “There,” says Lewin, “you need a car that can do the job.”

The GT2 might be overqualified for making runs to the local supermarket, but at the track or race club, it should be a model employee.