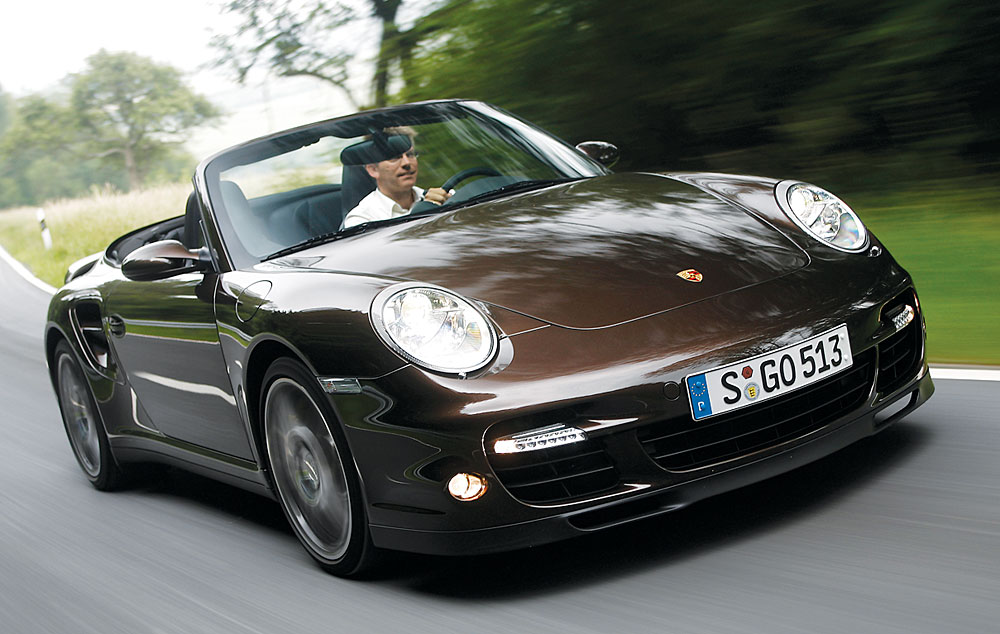 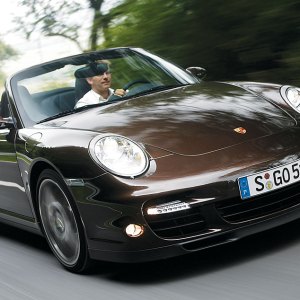 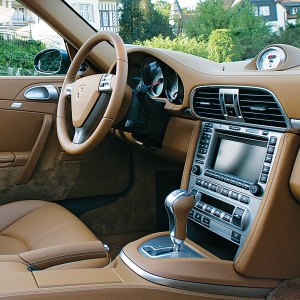 As the Porsche 911 Turbo Cabriolet shimmies and shakes on the German autobahn, I conclude that an oval racetrack might be a better venue for verifying the car’s 193 mph top speed. However, at saner, double-digit velocities, the ride is undeniably tame, and tall side windows and a wind deflector marginalize the normally deafening sound of the wind, allowing me to converse with my passenger. The Turbo Cabriolet, in its third iteration, has made great strides since the original version rolled off the production line 20 years ago.

The initial model run ended in 1989, two years after it had begun, because the Turbo Cabriolet—or the 930, as Porsche insiders called it—proved too impractical for everyday use. A raucous cabin, a bone-jarring ride quality, and extreme turbo lag were among its vices. But in 2004, Porsche resurrected the convertible Turbo, as the 996. That version became regarded as one of the world’s best convertible sports cars, earning favorable comparisons to the Aston Martin DB7 Vantage Volante, Ferrari 360 Spider, and Mercedes-Benz SL55 AMG.

The 2008 version of the 911 Turbo Cab, the 997, is the most powerful (480 hp) and most expensive ($136,500) drop-top Porsche in production—now that the company has stopped building the Carrera GT. The 997 is equipped with the same turbocharged 3.6-liter, 6-cylinder engine that moves the coupe, and the cabriolet’s split-wing spoiler creates aerodynamic downforce on the rear axle—a unique feature, claims Porsche, among production convertibles. When the top is up, the 997 cabriolet, unlike its predecessors, offers the same low-lift forces that its coupe sibling affords.

The cabriolet’s additional support in the side sills and thicker body panels (and automated retractable top) make it 154 pounds heavier than the coupe, but even with the extra support, it still is far less rigid than its sibling. It is also a couple tenths of a second slower, though it does reach 60 mph from a standstill in four seconds with the 6-speed manual and 3.8 seconds with the optional Tiptronic S automatic.

Of course, the primary difference between the two cars is the cabriolet’s soft top. Its three layers of fabric are intended to insulate the cabin from outside sound, heat, and cold. The top can be raised or dropped in just 20 seconds—even when the car is moving as fast as 31 mph—should showers begin to fall during a roofless outing. (Porsche offers an aluminum hard top that further insulates the cabin from outside sounds and provides a secure surface for mounting a rooftop transport system.)

The midday sun, not rain, prompts me to put the top up as I drive through the countryside near the town of Königstein. The car seems louder when the cabin is covered because the lid traps the sounds of the engine, tires, and wind. That comes as a surprise, but it would be no revelation to discover that the Porsche is more fun to drive with the top down, at any speed, in almost any setting.