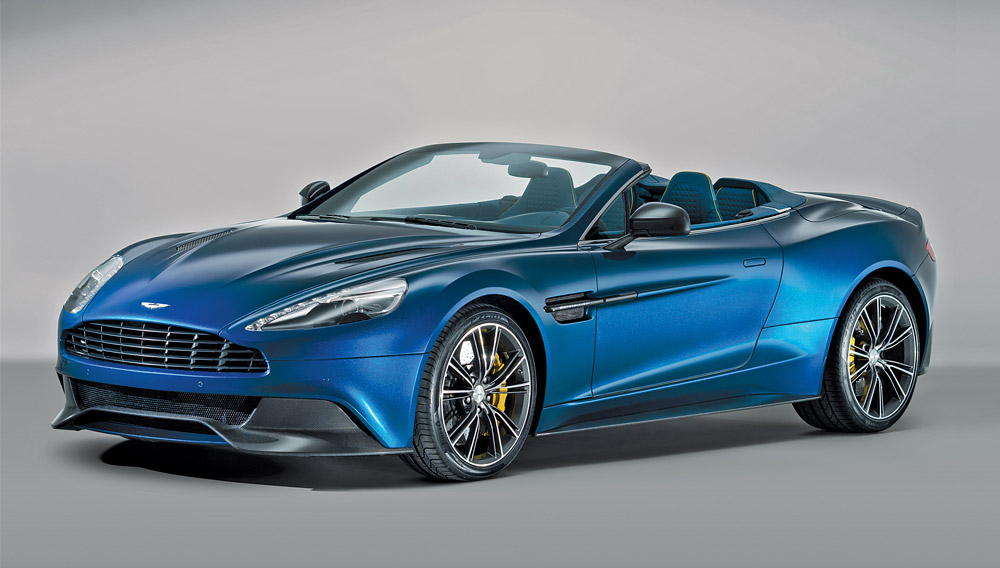 The rakish shape of the Vanquish Volante resembles the design of Aston Martin’s One-77. Like that $1.85 million supercar, it features a beautiful character line that conveys immense power and thus accurately indicates the capabilities of the car’s 565 hp, 5.9-liter V-12. The engine rockets the Vanquish Volante from zero to 60 mph in just over 4 seconds and enables it to reach a top speed of 183 mph—making it the fastest convertible that Aston Martin has ever produced. A carbon-fiber front splitter begins under the chin of the car, wraps around the front end, and flanks the underside of the front fenders. The splitter contributes to the aggressive look of the Volante and helps it remain under control when traveling at speed. The rear of the car features a ducktail-style spoiler that is split through the center, which enables it to function more like an open wing for better aerodynamics.

Owners will be eager to drop the top of the Volante to display the car’s handsome leather-lined interior. Aston Martin notes that more than 1 million stitches are required to sew together the car’s upholstery. Though the backseats are more suited to stowing luggage or packages than accommodating passengers, the front seats are remarkably comfortable.

The Vanquish Volante, like most exotics (with a base price of just under $300,000, it will be rare enough to be considered exotic), includes some intriguing, perhaps confounding, touches that contribute to its charm and aura of exclusivity. Knowing how to start the car and where to find the controls for certain features is comparable to knowing a secret handshake. Only the indoctrinated are aware that the switch for the retractable roof is located on the driver’s-side door, that the sport and suspension settings are on the steering wheel, and that the crystal Emotional Control Unit is a key fob that starts the car.

Other grand tourers may be more exotic or more powerful than the Vanquish Volante, but few cars offer such a splendid mix of stylishness, craft, and wind-in-the-hair excitement.