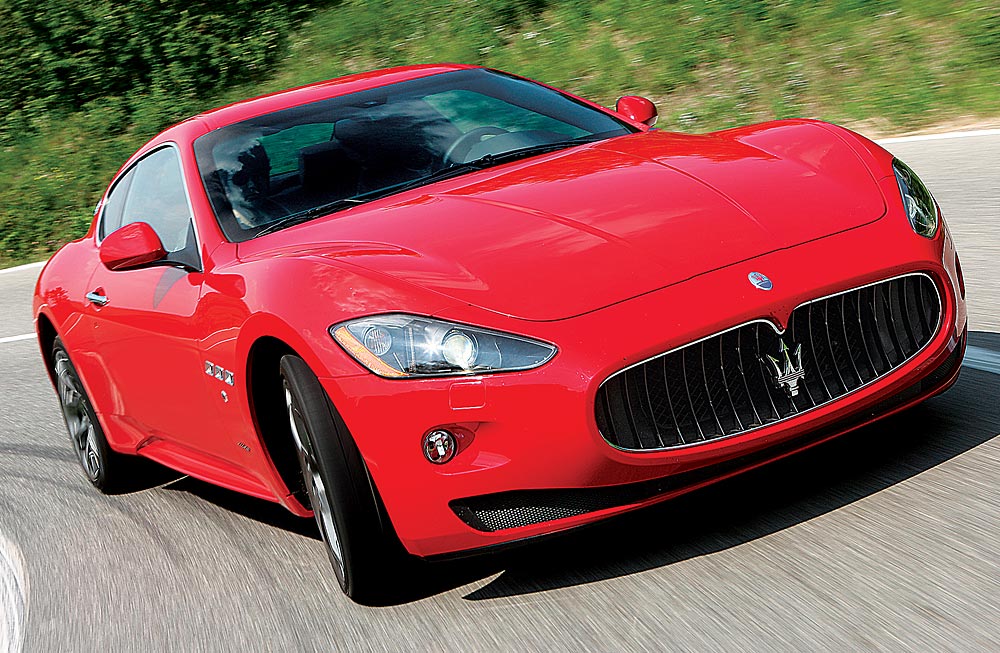 Pininfarina is sometimes too good at making cars appear sporty. Take, for example, the rakish GranTurismo, which the Italian design firm shaped for Maserati. The car’s silhouette promises a level of performance that its power train simply does not deliver. However, with the GranTurismo S—an angrier, edgier, and more powerful model being introduced at year’s end—Maserati is finally delivering on the promise inherent in Pininfarina’s design.

Beneath the long hood of the GranTurismo S, a Ferrari-built, 4.7-liter V-8 engine (last seen in the Alfa Romeo 8C Competizione) supplants the standard GranTurismo’s 4.2-liter motor. The bigger engine, which is topped with caldo red instead of freddo blue cam covers, develops 433 hp and 361 ft lbs of torque (an increase of 28 hp and 22 ft lbs)—more than sufficient power to propel this hefty grand tourer.

Turn the key, and the V-8 barks to life and then settles into an impatient idle. The car’s dual-mode exhaust system conducts hot gases along a circuitous route to a pair of oval-shaped tips, soaking up a fair amount of engine noise along the way. When you press the button labeled “Sport,” however, pneumatic bypass valves activate on either side, opening a straight shot to the rear and broadcasting the V-8’s full voice. (According to Maserati, the freer-flowing exhaust adds 8 of the 28 new hp.) Hold down the accelerator for any length of time, and the cabin fills with an Italian aria, a virtuosic composition of mechanical treble and burbling, resonant bass.

While the standard car’s transmission is a smooth automatic with a degree of manual control, the GranTurismo S’s rear-mounted 6-speed transaxle is a bona fide (and lightning-quick) sequential manual unit. Shift paddles on either side of the steering column engage the gearbox with no slush and no waiting. Beyond the quick “Normal” mode and the even quicker “Sport” mode is the transmission’s preternaturally fast “MC-Shift” mode, which—above 5,500 rpm and 80 percent throttle—initiates a shift sequence that completes a gear change in a tenth of a second.

The upgraded engine and transmission help the GranTurismo S attain 60 mph in 4.8 seconds (an improvement of a third of a second) and reach a top speed of 183 mph. The automobile’s handling is also markedly sharper than the base model’s, thanks to a 10 percent increase in roll stiffness. Augmented stopping power derives from dual-cast Brembo brakes that feature durable cast-iron discs around lightweight hubs made of aluminum.

Visual differentiation between the standard GranTurismo and the S model is more discreet. Subtle styling additions include side skirts, a lip spoiler, and blacked-out headlamps, and 20-inch wheels with spokes emblazoned with Maserati’s trident pattern. Inside, larger shift paddles behind the steering wheel reflect the S model’s emphasis on driver involvement.

Indeed, unlike the standard GranTurismo, the S is meant for spirited driving in manual mode, with both hands on the wheel, fingers relaxed and ready to pull the shift paddles. The car demands—and rewards—the full attention and constant participation of its drivers, of which there will be only a handful. Maserati expects to sell roughly 300 of the $135,000 S models in North America and is limiting production of the vehicle to just one model year.