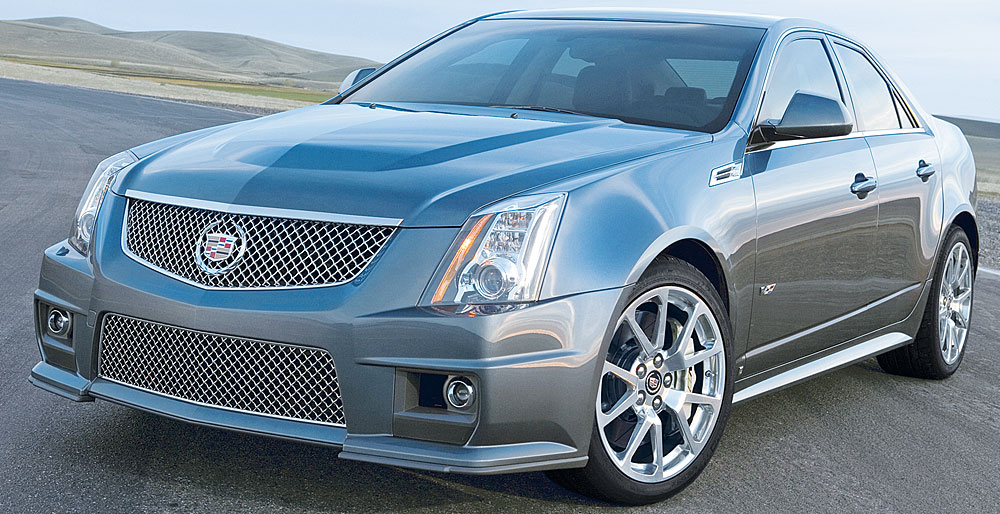 Know your enemy. The age-old warfare strategy defined the development of Cadillac’s all-new CTS-V sport sedan. “The team that worked on this particular V-series model stayed focused on the BMW M5,” says Chris Berube, lead development engineer for the CTS-V. “We really wanted to make a car that put up better numbers than the M5.”

Looking at the CTS-V’s specs, it appears that the engineers achieved their goal. They started with a 6.2-liter supercharged V-8 engine that delivers 556 hp to the rear wheels—56 more than BMW’s 500 hp V-10 motor. The CTS-V reaches 60 mph a half-second faster than its rival and has a top speed of 191 mph, which bests the M5’s mark of 155 mph. But, according to Berube, reaching the right numbers was the easy part. “This is not just a big engine; there are a lot of ways to get to 500 hp nowadays,” he says. “We changed everything: the suspension, the driveline, the steering wheel, the brakes, the shifter, the pedals. We made it a point to sweat the small stuff.”

To understand the performance details that make BMWs so appealing, Cadillac traveled thousands of miles and spent untold man-hours in German territory. The country’s most famous stretch of concrete and asphalt—the Nürburgring Nordschleife—is also BMW’s new-model proving ground. There, in May 2008, Cadillac demonstrated the CTS-V’s full performance capabilities by adding one more impressive figure to its list of numbers: a Nürburgring track record. With an official time of 7 minutes and 59 seconds on the 12.9-mile circuit, the 2009 Cadillac CTS-V currently holds the record as the fastest production sedan on street tires in the world. “We got people’s attention,” Berube says. “But we didn’t want to continue with the rough-and-tumble image, because that is not what Cadillac stands for.”

Unlike many German cars that are aggressive with high-revving engines, the CTS-V is surprisingly smooth and deceptively quick. “I’ve been asked so many times if the speedometer is calibrated correctly,” Berube jokes, “and I can say with 100 percent assurance that it is. This car was built to handle this type of engine. It never feels like it is overstressing itself, and it does not punish drivers for using power when they want it.”

Berube is being polite, but his comment about punishment and power is an indirect reference to the M5’s Sequential Manual Gearbox. The paddle-actuated transmission is infamously resistant to driver commands, lurching and lunging with every shift. By comparison, the CTS-V’s automatic gearbox offers two smooth transmission settings: drive and sport. An optional manual gear-select is also available—a first for this model—and is triggered by tapping the buttons on the back of the elegantly wrapped steering wheel.

This elegance extends throughout the car’s cockpit, which is fitted and finished as comfortably as the finest German automobile, employing a mix of microfiber and leather. The dash offers clean simplicity with a straightforward console cluster. LED lights that run beneath the trim further accentuate the interior lines.

If numbers sell cars—and Berube is confident that in this case they will—then maybe the most important one to know is the CTS-V’s $60,355 price, which is roughly $25,000 less than a brand-new BMW M5. “We encourage everyone to compare this car to the BMW M5 or the M3 and even the Mercedes-Benz C-Class or E-Class AMG models,” Berube says. “You will see for yourself that we have ’em covered.”