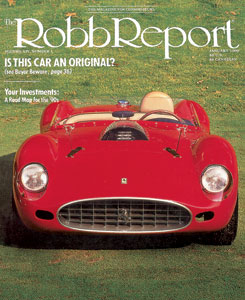 When our January 1990 cover asked readers, “Is this car an original?” without a doubt, few who correctly responded in the negative could elaborate on their answers. Only the most fanatical Ferraristi would recognize that this replica, unlike the Testa Rossas that rolled out of the Modena factory in 1959, had only three carburetors rather than six two-barrel Weber carburetors, or that the hood scoop was centered, rather than offset slightly to allow room for the real Testa Rossa’s new 5-speed gearbox.

Such esoteric yet handy information was available in that issue’s cover story, “Buyer, Beware,” an examination of the dangers of purchasing Ferraris first and asking questions later. The story was timely, for this was the peak of Ferrari speculation, a frenzied time when people were purchasing the cars as short-term investments destined for quick flips. “The joke was, you couldn’t pay too much, you could only buy too soon,” says Gerald Roush, owner and publisher of the Ferrari Market Letter, a biweekly magazine for collectors of the marque.

When demand is high and supply is limited, sellers can be tempted to shade the truth about their wares, and buyers can abandon their skepticism when they need it most. So it was then with Ferraris. Moreover, as Roush noted when interviewed for the 1990 article, the swindlers often could count the buyers’ egos as their partners in crime. “There is something about men and cars. . . . [Men] are not going to admit they are not car experts,” Roush said. “Every guy who ever had a driver’s license and owned a Ferrari is an expert on Ferraris. The biggest problem is that a lot of these people have been successful at something; that’s why they have all this money. Now they . . . jump into a market they know nothing about . . . but because they were successful, they think, ‘I can go in and do this.’ ”

Today’s Ferrari collectors may not possess any more humility than those who entered the market in 1990, but they do have more leverage, and not merely because the speculative market has cooled off. “People are not necessarily smarter, but there are more resources,” says Roush. “There’s more readily available knowledge out there, and it’s easier to get because of the Internet.” Of course, the Internet is also the domain of the unscrupulous, including a person who in February ran an online ad for a 1995 Ferrari F50.

The car was supposedly in Singapore and carried the suspiciously low price of $150,000. “It sounded too good to be true,” says John Cannizzo, chairman of the board of the Ferrari Owners Club, explaining that F50s usually sell for about $600,000. “It turned out that the car he said he had was in France and was owned by another individual.”

The perpetrator was squelched before he had a chance to bilk anyone. He was not charged with a crime, but that is not to say he escaped reprimand. “In most countries, attempted fraud is not prosecutable,” says Cannizzo. “But the authorities in Singapore had a chat with him.”

Ultimately, say both Roush and Cannizzo, the best way to avoid being snookered is to suppress your emotions, maintain your wits, and carefully vet the vehicle before purchasing it. “It comes down to buyers doing their homework,” says Roush.

In other words, educate yourself enough to know whether the F50 pictured on this page is an original. (It is.)