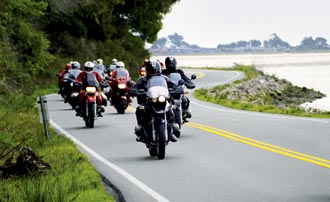 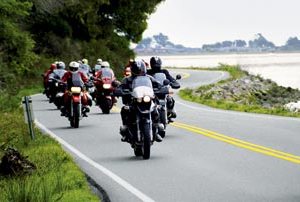 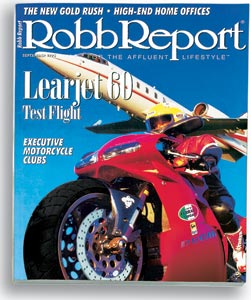 Forming a club is not nearly as challenging as sustaining it. In addition to maintaining the original spark of enthusiasm that led to the club’s creation, its leaders must continually add new members who will someday carry the flame. For the executive rider clubs that we profiled in a September 1995 feature, “A Different Breed of Biker,” succeeding at either requirement would have become even more difficult if Courtney Caldwell’s assessment of the rubbies (rich urban bikers) phenomenon had proved prescient. “Like any sport, you see it reach a peak,” Caldwell, then the editor-in-chief of American Woman Motorsports magazine, told us. “It’s a cool thing to be doing now. In five years, it could be sailing boats.”

As it turns out, riding has remained cool enough for at least two of the clubs featured in the article—the Montgomery Street Motorcycle Club (MSMC) and the Sons of Danger (SOD)—to stay afloat. However, the two could not diverge more from each other on matters of organization and admission, suggesting that longevity can be reached by a number of routes.

MSMC, founded in 1969 and based in San Francisco, is robust and highly structured, with a monthly newsletter that is thick with photos and reports from rides and other social events.

To become a member, a rider endures a kind of courtship ritual. After applying for membership, a candidate must be sponsored by two members, and then he or she has to attend a series of club gatherings: two day rides, one overnight ride, and at least one monthly lunch or dinner event. “We want interesting, intelligent people who ride well and will make a contribution,” says 71-year-old Tom Hall, the last active founding member of the club, adding that every candidate is viewed as a potential president.

Hall makes no apologies for the rigorous admissions process, contending that it is the source of MSMC’s longevity. “We are probably considered by the average rider as a hard-to-get-into, snobby group of people. Maybe we are that way, but we want more from people who join than the average club.”

The Sons of Danger admissions policy skewers and trumps the notion of exclusivity in the same stroke: Anyone who asks to be in the club is refused membership. “The whole idea is it’s not a club. It’s a send-up, a spoof. We don’t try to build membership. We don’t care,” says 69-year-old Eric Davison, who has been with the group since its inception, which occurred sometime in the mid-1970s. No one bothered to record the exact date.

Davison has no official title, but it is fair to say that he has been the club’s de facto leader since its founder, Charles Alexander, died of cancer in 2002. This avoidance of honorifics is consistent with the club’s philosophy. “There are no rules, no bylaws, no meetings, no dues, nothing,” Davison says. “Friendships linger, and that’s how we stay together.”

This laissez-faire approach has sustained the club for three decades, and as one would expect, Davison is not overly concerned with the club’s future. “If it dies, or goes away,” he says, “that’s OK.” Spoken like a true SOD, whose founder, when referring to another executive rider club in 1995, said, “They’re a nice group of people, but they’re too organized. That’s the problem.”

The lesson offered by the staying powers of MSMC and SOD is clear: To ensure its longevity, a venture requires complete commitment—or none at all.