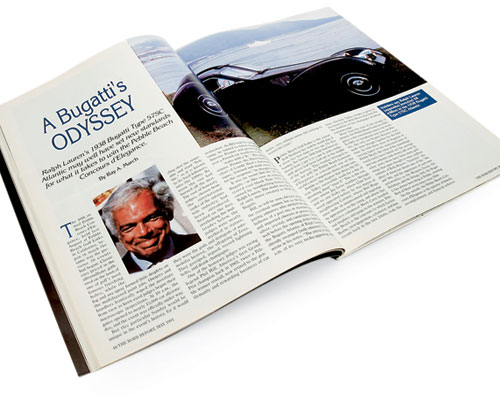 Ettore bugatti is long dead, but the brand name that he created will not rest in peace. The launch of Parmigiani’s Bugatti Type 370 watch (“Engine Timing,” page 139) arrives ahead of the market debut of Volkswagen’s oft-delayed Bugatti Veyron, now scheduled for release this fall. The VW endeavor is the second major attempt to revive the marque; the first was led by Italian entrepreneur Romano Artioli, who produced the EB 110, the 550 hp, 215 mph sports car featured in the cover story of Robb Report’s January 1992 issue (“Bugatti’s Blue Heaven”). The article compares Artioli’s endeavor with Ettore’s production of the Type 41 Royale, noting that both defied sense and practicality.

Artioli did not disagree with this assessment. “In this life there are some things more important than breaking even,” he said in the article. “Maybe the moment had come to add a pinch of liberating foolishness to my life—to start to dream again.” Priced at $350,000, the EB 110 debuted on September 15, 1991, on the 110th anniversary of Ettore Bugatti’s birth and, more significantly, during an economic recession. Four years later, and two years after Artioli had purchased Lotus from General Motors, his Bugatti operation went bankrupt, after building slightly more than 100 cars.

Unlike the original Bugattis, the EB 110 is not regarded highly by collectors. Indeed, one can be acquired today for about half of its 1992 selling price. Ettore’s Royale, of which only six were built, in part because its introduction—on the eve of the Great Depression—was as poorly timed as the EB 110’s, is now among the world’s most coveted cars. The last one to sell at auction, in 1987, fetched the equivalent today of more than $16 million.

The decline of Ettore’s company began in August 1939, when his son and heir apparent, Jean, was killed at the age of 30 while test-driving a Type 57C. World War II began weeks later, further crippling the company. Ettore’s death in 1947 essentially marked the end of Bugatti, although the factory survived until the mid-1950s.

Viewers of the Speed, Style, and Beauty: Cars from the Ralph Lauren Collection exhibit at the Museum of Fine Arts in Boston (“Art of the Automobile,” page 31) will gain an appreciation for the difficulty of building a car worthy of the Bugatti name. The star attraction is Lauren’s 1938 Bugatti Type 57SC Atlantic Coupe. As described in a May 1991 Robb Report feature (“A Bugatti’s Odyssey”), the car won the Pebble Beach Concours d’Elegance Best in Show award in 1990 following a restoration at Paul Russell’s Massachusetts workshop. Lauren’s Bugatti has been called the most beautiful car in the world, and it has an estimated worth of $20 million.

The Atlantic Coupe was the first Bugatti Russell worked on (he has since restored six others), and the 20-monthlong project gave him an appreciation for what its makers accomplished. “The entire car, as assembled, had great style and presence, but when you boiled it down to individual pieces, they were beautiful in and of themselves,” says Russell. He is skeptical, therefore, of modern attempts to resuscitate Bugatti, agreeing with the assertion that it is like trying to reproduce the Mona Lisa. “Bugatti is gone, and the family isn’t involved anymore,” he says. “If you want to make a statement in the philosophy and manner that Bugatti did, fine, but do it in your own name and your own interpretation.”