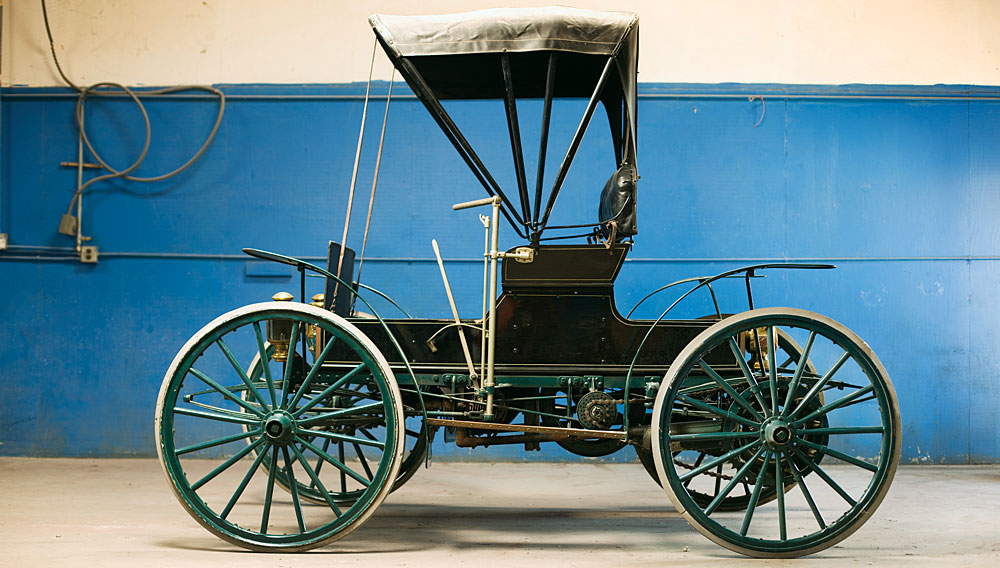 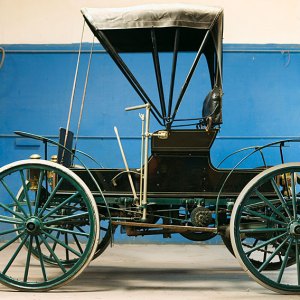 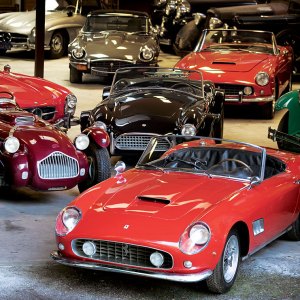 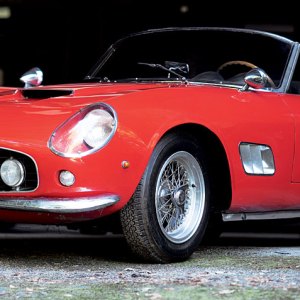 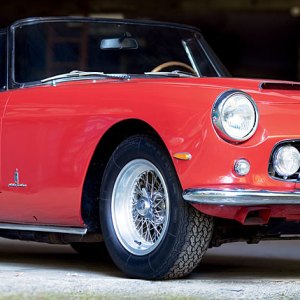 Valentine Reyes unlocked the massive rolling doors, shoved them open, and smiled. “There are a lot of memories in here,” he said. Once my eyes adjusted to the light, I blinked. Spread out before us was what could be called the world’s greatest barn find—or, to be more precise, warehouse find—comprising nearly two dozen vintage and classic machines from such revered marques as Mercedes-Benz, Jaguar, and Ferrari. Until shortly before my visit last November, no one except the owner’s surviving family members and maybe a few friends knew that the collection existed.

The shelving surrounding the cars held P-51 Mustang aircraft engines and other esoterica, and on the walls were posters touting vintage cars and races. Hanging among the posters was a photo of Ron VanKregten, the former owner of this warehouse and all of its contents. In the picture, VanKregten—a barrel-chested man’s man in the mold of John Wayne—is grinning with a few buddies as they stand before Howard Hughes’ Sikorsky S-43 Flying Boat, one of the more notable planes that VanKregten had acquired. “He really was a bear of a guy, and once you got to know him you immediately appreciated how he set his sights on things in life and worked hard to achieve them,” said Reyes, whose sister, Maria, was married to VanKregten.

Private yet gregarious, VanKregten made his fortune as an entrepreneur and real estate investor. In the early 1970s he began acquiring his eclectic and stellar assortment of automobiles, motorcycles, and aircraft. He assembled his collection in a private museum, a warehouse high in the hills of Scotts Valley, a small city just north of Santa Cruz, Calif.

In 2002, VanKregten died unexpectedly at age 60. After Maria passed away five years later, their family members reluctantly decided to sell the collection—or at least most of it.

When collectors speak of a barn find, they generally are referring to the discovery of an abandoned classic car, one that is perhaps peeking out from bales of hay or hidden behind farming implements in a barn. The VanKregten cache, which had never been viewed by the public, might not fit the traditional definition of the term, but its discovery was at least as surprising as that of any barn find. “None of us knew these vehicles were even out there,” said David Gooding from his office in Santa Monica, Calif., shortly before his firm, Gooding & Company, conducted the January sale of the VanKregten collection during its annual Scottsdale Auction in Arizona. “They were lost cars. This is what we all dream about.”

Lined up along the back wall of VanKregten’s Scotts Valley museum, underneath pool-hall-style lights with spinning fans, was a small army of American metal. The oldest was a circa-1928 Ford Model A, a car in which trips to San Francisco became memorable, daylong family outings for the VanKregtens and their two daughters, Jennessa and Kristina. Other highlights of this group included a 1953 Allard J2X and an equally gleaming 1937 Cord 812 SC Phaeton.

Parked just off their noses was a gaggle of motorcycles ranging from a 1952 Vincent Series C Black Shadow to a 1977 Ducati Desmo 900 Super Sport—with just 1.7 miles on its odometer. “He never had any intention of riding it,” Reyes said of VanKregten and the Ducati. “It was for the museum.”

Also on display were such classic sports cars as a 1959 Mercedes-Benz 300SL Roadster and a 1964 Ford Cobra 289. A 1973 Jaguar E-Type with 13,000 original miles was painted an unconventional shade of brown offset by a black factory hard top. “Most cars Ron got he didn’t drive,” said Reyes. “This one he did. He loved that it was different.”

And then there were the Ferraris, a 1961 250 GT Series II Cabriolet and a 1960 250 GT SWB California Spider. The redheaded duo sat side by side, resembling twins who each had a few distinguishing features. “Dad went through a Ferrari phase in the early ’80s. He thought they were art,” said Jennessa VanKregten, the older of the two daughters. “It was a strange time,” she added. “People often were getting rid of these cars to do things like buy drugs. Once my father bought the cars, he knew that he would keep them original. He was obsessed with that.”

It was strange to sit inside a Ferrari worth millions of dollars and be surrounded by the punishing effects of age. If you ever come across a Cal Spider—Ferrari produced only 54 of the SWB (short wheelbase) models—it will likely have been restored to the teeth. But VanKregten’s was dusty, creaky, and displaying all of its nearly 50 years. Its paint and leather were faded and cracked, and its engine resisted the turn of a key. This car was proud it had reached middle age.

As Gooding noted later, such disrepair thrills him. “Far from a negative, it’s part of the appeal,” he said. “People who are interested in cars like these want to put their own stamp on it. They’ll restore it properly, and it’ll be known as their Ferrari from there on forward. What’s most rare is finding a car like this, which allows you to start that process from a totally original state.” The Spider was at the “top of the food chain for Ferrari road cars,” added Gooding. “It’s a once-in-a-lifetime find.”

Vankregten’s life began in the Netherlands, where his family lived before moving to Southern California when he was a child. One of his first jobs was working as a gas-station attendant, which sparked his interest in cars. He eventually moved north to San Jose, where he founded a small automotive trade school that he grew into a chain. When successes in real estate followed, VanKregten began building his collection, beginning with motorcycles and cars and then moving on to planes.

The VanKregten family compound is nicknamed “La Cuesta Encantada” (The Enchanted Hill), the moniker that William Randolph Hearst gave to his San Simeon estate. The property encompasses four acres overlooking the Pacific Ocean and includes the warehouse/museum, a house that VanKregten designed, and a perimeter wall that he helped build. The house curves around a swimming pool and has a massive redwood deck with an outdoor kitchen and grill area. The property also includes two other buildings: one that Maria kept her sewing equipment in, and one, which featured a billiard table and a bar, where the couple used to host parties. Though impressive, the property, like VanKregten’s automobiles, is beginning to take on the patina of time.

“Ron taught me that things don’t happen by accident, you plan them,” said Reyes as he and I strolled the grounds at a leisurely pace. “I kind of got motivated to do something because of him. I got through school and became a registered nurse. He was an impressive guy that way.” Reyes led the way along a series of snaking paths back to the warehouse that held his brother-in-law’s cars and motorcycles. He had spent countless hours in the building, but the collection still seemed to awe him as much as it did anyone who visited it. Reyes told a story of inviting a few car-loving friends over to help him clean up the building in anticipation of a visit by Gooding’s team. “One guy looked around and then said to me, ‘Sorry, I need to step outside for a second and compose myself.’ He just couldn’t believe the cars here.”

The family was not going to part with the entire collection. VanKregten’s daughters planned to keep the Cobra and a Mercedes 300SL Gullwing. “Dad spent a lot of time in that barn of his,” Jennessa said. “It’s bittersweet to see the cars leave, which is why we kept the ones that had sentimental value to us.” Then she added, “I just hope that the people who buy these cars have the same sort of passion my dad had.”

The highlight of this year’s festive Gooding & Company Scottsdale Auction—an annual event held in January—was the sale of the late Ron VanKregten’s car-and-motorcycle collection. The top lot was an unrestored 1960 Ferrari 250 GT SWB California Spider that VanKregten had acquired decades ago. The rare stallion from Maranello sold for $4.95 million, a price that might represent quite a bargain. At a European sale last year, a restored Cal Spider sold for an eight-figure price. If you factor in an exquisite half-million-dollar restoration, the VanKregten car’s new owner would still be far ahead of the game, noted Jakob Greisen, a specialist for Gooding & Company.

“We had a lot of people milling around the cars before the event, almost like people amazed to be at a dinosaur graveyard,” said Greisen. “Real collectors love to uncover the history of a special car, especially one that has not been seen for a long time.”

Altogether, the 12 cars and eight motorcycles in VanKregten’s collection fetched about $6.6 million.