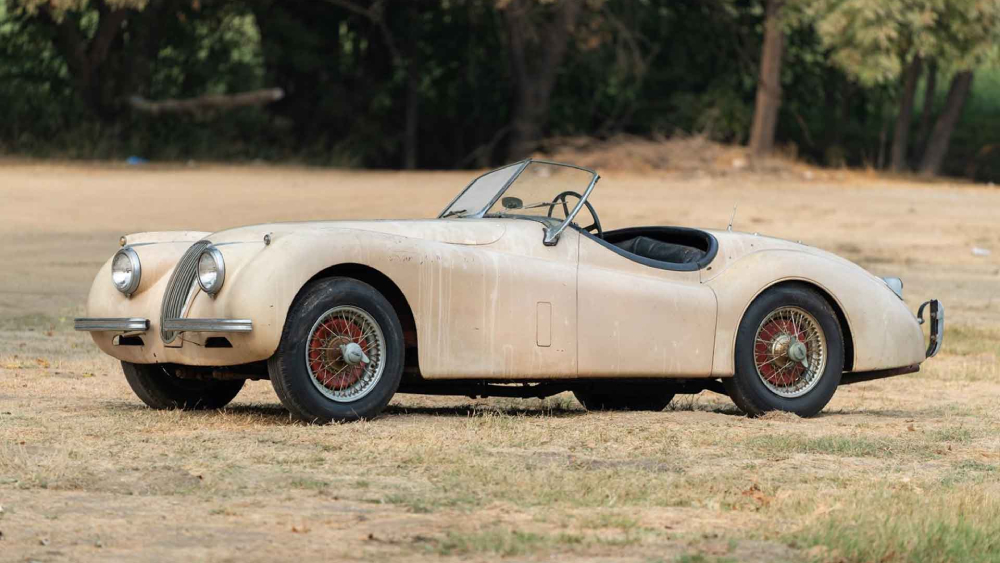 Barns finds aren’t just the stuff of myth, apparently. Just ask the person who found a vintage Jaguar buried in a rural barn outside of Cleveland, Ohio.

The 1954 Jaguar XK120 Roadster was recently discovered untouched from its original configuration. It includes the original engine as well as exterior and interior colorways verified by the marque. Made for the US market, the two-seater was delivered to Hoffman Motors in New York and participated in various Cleveland-area sports car club rallies and economy runs through the early 1960s. Little else is known about this particular example, but a couple of thing are clear: It’s an ideal candidate for a handsome restoration, and it’s now being offered by Gooding & Company.

Jaguar first intended the XK120 as a hand-built specialty car designed to boost interest in the brand. However, after the economic boom that followed World War II, demand was so high that the company was forced to put it into regular production.

The original engine block remains in place as verified by Jaguar.  Courtesy of Gooding & Company

Constructed with elegant, flowing lines, the XK120 was inspired by Jaguar’s racing heritage and ended up becoming an influential model in the world of sports cars in its own right. The body type number 120 was designed to accommodate the model’s anticipated top speed of 120 mph, but that figure soon proved too low as it achieved 132 mph on a Belgian raceway during testing. Racing versions of the vehicle went even further, with drivers like Stirling Moss and Phil Hill winning important events in 1949. The cars were powered by a twin-cam, six-cylinder engine, which eventually found its way into many Jaguar models and even resulted in five Le Mans wins between 1951 and 1957.

Over the course of its six-year production run, the XK120 was refined and upgraded with each passing iteration. Increased horsepower, stiffer valve springs and dual exhaust outlets all added to the car’s performance and aesthetics.

Visit the Gooding & Company website to inquire further and be ready to place your bid for this diamond in the rough from October 26-30. See more photos of the vintage beauty below: