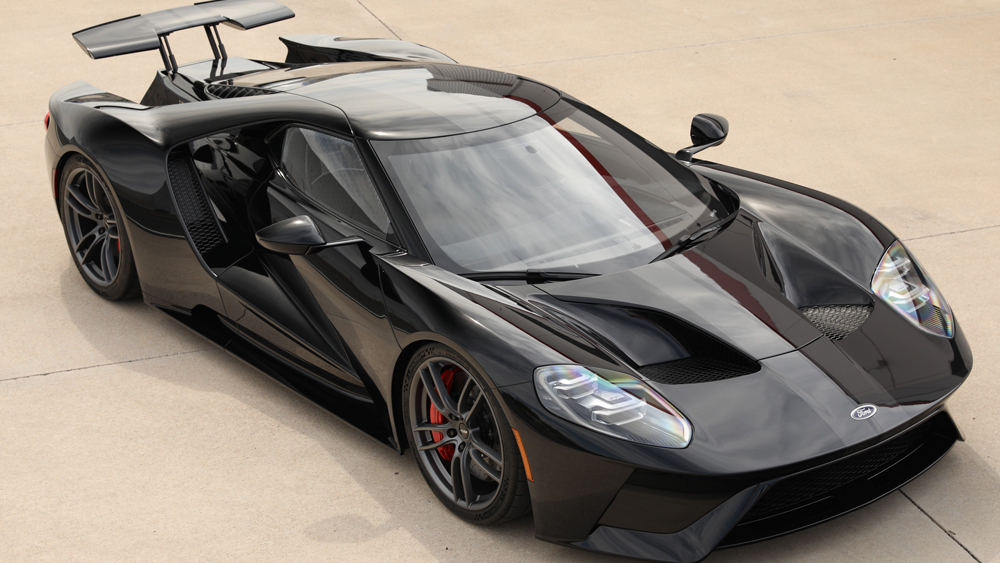 It’s not as if we needed Hollywood’s racing blockbuster Ford v Ferrari to stir up interest in the American automaker’s race cars. The original GT40—the vehicular star of the film—has had fans from the beginning. More than three decades later, Ford hit a home run when they brought out the Ford GT, made in scant numbers between 2004 and 2006. A well-done tribute to the GT40 that fairly dwarfs the original, the supercharged machine was a hoot to drive, but made no pretense of being a racer like the car that inspired it.

The latest iteration is a different story altogether. “The Ford GT is a descendant of the GT40, which made history with four consecutive 24 Hours of Le Mans wins—beginning with the famous 1-2-3 finish in 1966,” says Craig Jackson, CEO and chairman of Barrett-Jackson. “This 2018 Ford GT supercar honors that racing heritage and will make its own history as the world’s first 2018 Ford GT to be offered at auction during Barrett-Jackson’s Online Only July 2020 Auction.”

The most recent Ford GT was designed to win races, like the number 68 example from Ford Chip Ganassi Racing that took first place at the 24 Hours of Le Mans in the LMGTE Pro class for the 2016 season. Production of Ford’s no-holds-barred GT began in earnest at the end of that year, and will continue through the end of 2020, the company making about 250 units annually. Hardly thick on the ground, the process for acquiring the rare GT raised hackles among the thousands of enthusiasts vying for a position to acquire one. Prior to its release, Ford required a résumé from each prospective buyer, with criteria for selection being a secret known only to the brass in Dearborn.

With its power-train configuration, the 2018 Ford GT can accelerate from zero to 60 mph in less than 3 seconds and reach 216 mph.  Photo: Courtesy of Barrett-Jackson.

There is a reason to want this car. It is brutal, purpose-built and unique. While its twin-turbo EcoBoost V-6 engine is an outlier in a world of V-12 and hybrid-electric hypercars, its carbon-fiber monocoque chassis with aluminum subframes fore and aft, pushrod suspension and active aerodynamics offer performance that’s, predictably, like a race car. And yes, you can drive it on the road, which I enthusiastically did for roughly a hundred miles. Once one becomes accustomed to the unusual engine note, the car is surprisingly tractable, comfortable and altogether enjoyable. On the track, the vehicle never broke a sweat, unlike this driver, who managed to reenter the pits without incident. It’s nice when that happens.

This example is finished in Shadow Black with Alloy racing stripes. The Dark Energy interior theme is all business, as is the power train, which makes possible a top speed of 216 mph and a sub-three second zero-to-60 mph time. Only 853 miles have been clocked on the odometer thus far, just about one quarter of the distance raced during the 24 Hours of Le Mans.