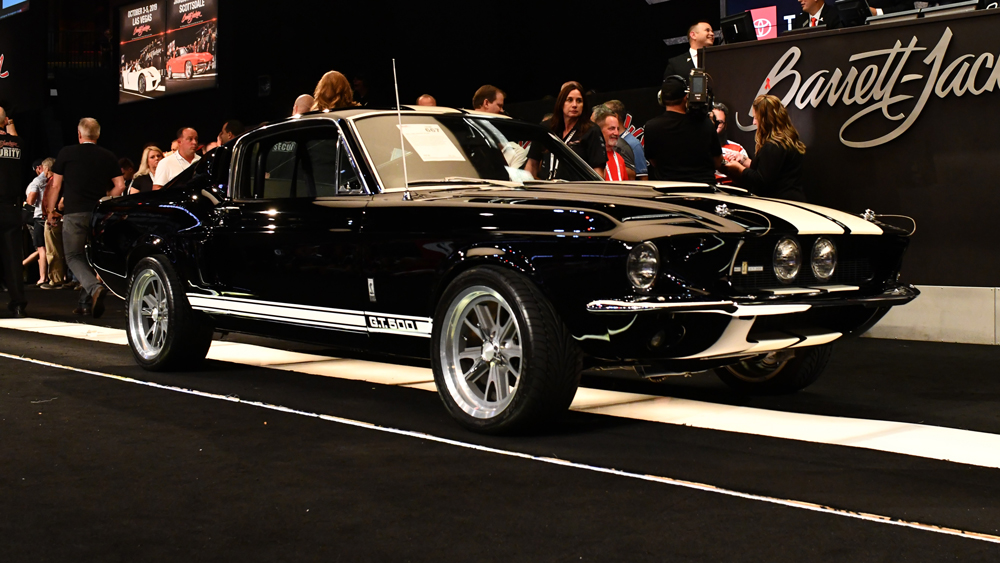 The mercury was already rising by mid-morning at Connecticut’s Mohegan Sun, host of Barrett-Jackson’s Northeast 2019 auction, as attendees recently queued up for hot-lap rides in Ford’s new GT350, GT500, and—for the lucky few—the new Ford GT supercar. As they waited for a 30-second dose of excitement, professional drivers warmed up on the track, making tires squeal as they piloted Dodge Hellcats and Demons through slide turns. Soon, those drivers would be taking other auction guests on hair-raising thrill-rides in those same vehicles.

Hot laps were offered in a Ford GT.  Photo: Courtesy of Barrett-Jackson.

The early-day action outside reinforced the notion that Barrett-Jackson events foster an enthusiasm for automobiles beyond the collector hobby. Nevertheless, the collector community remains Barrett-Jackson’s primary demographic; and as the fourth installment of the company’s auction presence in the northeast revealed, that demographic is at the precipice of a major shift.

A decade ago, painstakingly restored, matching-numbers classics from the golden era of American muscle would have dominated the sales results of any Barrett-Jackson event. Not anymore. The most valuable example in that category during this latest sale, a 1967 Ford Shelby GT500 (opening photo), sold for $165,000, but it failed to crack the auction’s top 10 sales. Instead, aggressively modified mid-20th-century vehicles, like a 1954 Buick Special Custom Coupe ‘G54’ and a 1969 Ford Bronco Custom SUV, made the list, selling for $220,000 and $203,500, respectively.

Most surprisingly, a 1997 Toyota Supra Anniversary Edition with fewer than 70,000 miles on its odometer and one of only 376 black examples produced in Targa configuration sold for $176,000. It bested a 2014 Ferrari California Convertible ($170,500) that had been driven fewer than 8,000 miles, as well as the aforementioned GT500.

“It’s not a fad, for sure; this was something that was coming for a long time,” said Craig Jackson, Barrett-Jackson’s CEO, speaking after the show about the event’s results, as well as the prominence of significantly modified classics and the emergence of new collector cars from the 1990s. “The whole collector car market has really broadened out. The hobby has evolved and these trends will continue to evolve with the age and interests of the people who are going to buy [these cars].”

A 2014 Ferrari California Convertible with less than 8,000 miles on it.  Photo: Courtesy of Barrett-Jackson.

In total, 545 vehicles sold for more than $21.8 million over the course of Barrett-Jackson’s three-day, presentation. Three additional vehicles sold for charity, led by the final example of the seventh-generation (C7) Chevrolet Corvette, which sold for $2.7 million. All of the proceeds of the yet-to-be-built C7 Corvette benefited a foundation that builds smart houses for soldiers who have suffered life-altering injuries while serving in the military.

Just before that record-setting charity car crossed the block, Jackson stepped down from the podium to bid on a 2019 Chevrolet Corvette Z06, the first Z06 that was produced in 2019.

The Chevrolet Collection show car boasts a 7-speed manual transmission. “I thought it had a lot of provenance to it,” Jackson said. “If people are smart, they’ll put away some of these stick-shift, front-engine Corvettes. It’s the end of an era.”